You may also like
Dismiss
Allure of the Seas Cruise Ship to Make Oasis-Class Debut in Galveston
Cruising the Newest Ship Afloat: Live From Celebrity Apex
Live From Celebrity Edge: A Cruise That Seems Normal Again; "I'm So Hopeful"
Emerald Cruises Officially Launches in Australia
Celebrity Beyond Completes Sea Trials; Moves One Step Closer to Debut
Disney Wish To Feature New Onboard Entertainment Firsts from Disney Cruise Line
The Biggest Cruise Ship in the World, Wonder of the Seas, Has Arrived in Florida
Royal Caribbean Unveils New Entertainment Line Up on World's Biggest Ship, Wonder of the Seas
Celebrity Cruises Partners with Annie Leibovitz, Renowned Photographers in Project That Recognizes Diversity in Travel
Royal Caribbean Showcases New Icon of the Seas Cruise Ship with 'Making an Icon' Video Series 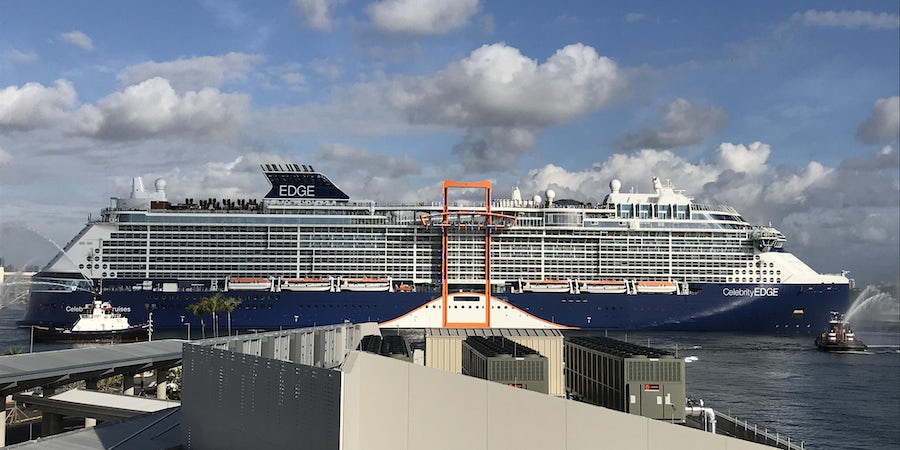 Celebrity Edge Cruise Ship Arrives in the U.S. for the First Time

(12:30 p.m. EST) -- One of the most highly anticipated cruise ships to launch in more than a decade arrived today in the U.S. for the first time. Celebrity Edge docked at Port Everglades' Terminal 25 -- Celebrity Cruises' brand-new terminal -- just after 9 a.m., as cruise line executives on the ship waved to a small crowd of media and cameramen below.

Port Everglades was abuzz beginning at around 6:40 a.m., when Celebrity Edge became visible on the horizon. A chopper team captured aerial shots of the ship, which strutted its stuff with a 360-degree turn while sounding its horn as it approached the dock -- amid sunny skies with a gleaming rainbow.

"This is a pretty special day for Celebrity Cruises," said Lisa Lutoff-Perlo, president and CEO of Celebrity Cruises, who was among those onboard the ship as it arrived. "After four years in the making and thousands of people working on this project, I didn't think it could get any better … I've seen the photos with rainbows; it's a magical day."

Celebrity Edge is Celebrity Cruises' first-in-class ship since 2007, when Celebrity Solstice debuted. It's also the line's newest ship in six years, and will be the first of four ships in the new Edge class.

Following the ship's arrival, a ribbon-cutting ceremony was held at Terminal 25 marking the facility's official grand opening. Terminal 25, which underwent a $120 million renovation that required the demolition of two smaller terminals to increase square footage, is the first Celebrity Cruises-branded terminal in Port Everglades. It was designed specifically for Celebrity Edge but also will be used by other Celebrity ships including Celebrity Reflection, Celebrity Silhouette and Celebrity Infinity. The expanded space is projected to boost passenger traffic to the port.

"The investment in this innovative terminal is going to allow us to grow," said Steven Cernak, Port Everglades' cheif executive and port director. "Historically, Port Everglades welcomed on average approximately 335,000 Celebrity guests annually, representing about 9 percent of overall passenger traffic. With the completion of this terminal, we anticipate that Celebrity will generate approximately 500,000 guests -- representing 14 percent of the port's projected passenger traffic."

Terminal 25 boasts a chic, Scandinavian-inspired design reflective of Celebrity Edge, with innovative technology designed to expedite the check-in process for all passengers, an interactive wall art installation, and a separate screening area, rooftop terrace and other perks exclusive to suite passengers. It opens less than three weeks after Celebrity Cruises' sister brand, Royal Caribbean, unveiled its new Terminal A in PortMiami.

Standout features of Celebrity Edge include a "floating" deck called the Magic Carpet, which can double as a tender station or restaurant/bar depending on where it's located; "Infinite Verandah" cabins that can be either an outdoor space or provide more room indoors with the touch of a button; six new-to-Celebrity restaurants; and the largest spa in the fleet.

After the Caribbean, the ship will reposition to the Mediterranean, offering cruises out of Barcelona and Rome; it also will sail a two-night mini-cruise out of Southampton, England.

Get a sneak peek of Celebrity Edge in our slideshow, and stay tuned for live coverage when we're onboard from November 25 to 27.