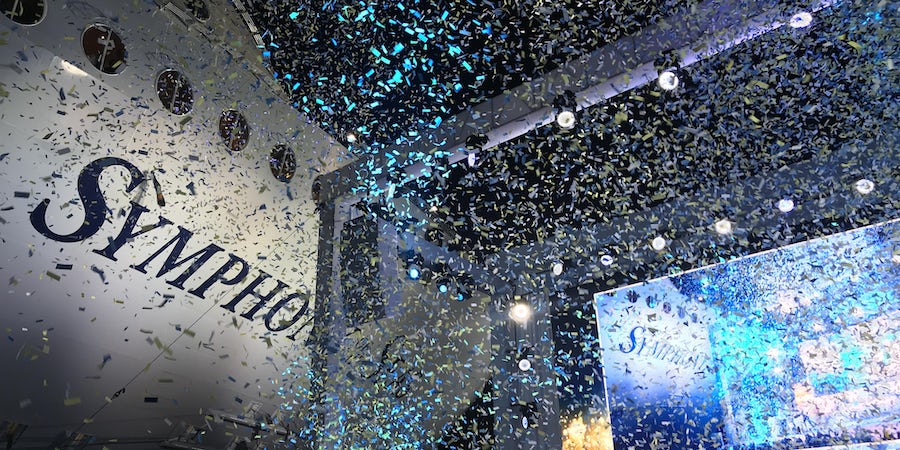 (8:45 p.m. EST) -- With the smash of a Champagne bottle, TV and movie stars Carlos and Alexa PenaVega, alongside their 23-month old son, today christened Royal Caribbean's Symphony of the Seas as the industry's first-ever godfamily.

The ceremony was held alongside the ship while it was docked in its new homeport of Miami, in front of an audience that included Royal Caribbean Cruises Ltd.'s chairman and CEO, Richard Fain; Royal Caribbean International's president and CEO, Michael Bayley; the ship's captain, Rob Hempstead; and a small group of media and travel agents. It was the first time in 19 years Royal Caribbean christened a ship in line with maritime tradition, by releasing the bottle against the ship's hull, as opposed to a venue onboard.

Alexa, who plays Carmen Cortez in the "Spy Kids" film series, and Carlos, best known for his roles in various Nickelodeon TV shows, are self-proclaimed Royal Caribbean cruisers who Bayley described as being a perfect fit for the ship. "I knew upon meeting the PenaVegas that they were not only typical of so many of our passionate and loyal guests, but they also have that special something just like Symphony of the Seas."

Before the PenaVegas christened the ship, host Nick Weir, Royal Caribbean's senior VP of entertainment, introduced a handful of special guests. Among them were the cast of Symphony of the Seas' "Hairspray" production show, who kicked off the ceremony with a cover of Clean Bandit's "Symphony," and Louise Marshall, piper to the Lord Provost of Edinburgh, who treated the audience to a solo bagpipes performance before joining the Police Pipe and Drum Corps of Florida.

The entertainment followed with the "Hairspray" cast's rendition of the U.S. National Anthem, as well as blessings from Pastor Dan Bailey and Rabbi Jeremy Barras. But it wasn't over just yet. The local Miami Southridge Senior High school's marching band took the stage shortly after, putting on a show that eventually ended in a standing ovation.

Fain concluded the pre-christening series of events by highlighting what makes the ship stand out from its sisters Oasis, Allure and Harmony of the Seas, and praising the Royal Caribbean crew.

"Symphony of the Seas really does exemplify our mantra of continuous improvement in an outstanding way," said Fain. "Even though this is the fourth ship in the series, Michael and his team absolutely refused to build a carbon copy. They were determined to take something that was already pretty great and make it even more special."

Unique features found on Symphony of the Seas include a laser tag arena, new restaurants Hooked and El Loco Fresh, a sports bar and arcade, and improved fuel efficiency built into the ship's design.

The ship was officially christened when the PenaVegas stood on stage and pushed a button, prompting the release of the Champagne bottle that soared over the audience before smashing into the ship's hull. Confetti poured from the sky as rain began to fall, after holding out until the very end of the ceremony, making for what Fain called a "perfect night."

Symphony of the Seas launched in April 2018 as one of the world's biggest cruise ships alongside Oasis, Allure and Harmony of the Seas. The 5,518-passenger (6,680 total) ship spent its inaugural season sailing in Europe before making its way to Miami, where it will offer year-round Bahamas and Caribbean cruises.

Cruisers booked on Symphony of the Seas will board the ship at its new terminal in PortMiami, which Royal Caribbean unveiled in early November.

Take a virtual tour of Symphony of the Seas.