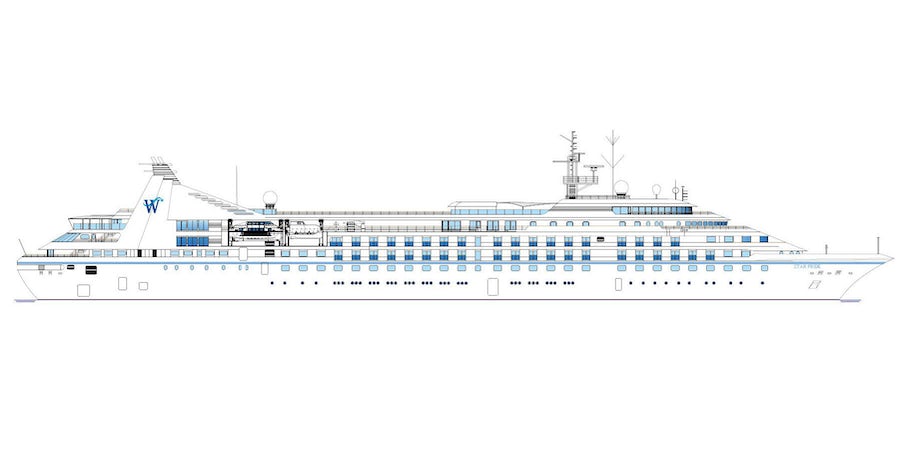 Windstar to Stretch and Refurbish Its Star-Class Cruise Ships

Between October 2019 and November 2020, each ship in turn, beginning with Star Breeze, will be cut in two and receive a new 25.6-meter midsection. The addition will add 50 cabins to each ship, bringing the passenger count from 212 to 312, but keeping ship size small enough to access the out-of-the-way and smaller ports Windstar frequents. The work will be done at the Fincantieri Shipyard in Palermo, Italy.

In addition, the line will hire more crewmembers to maintain its 2:3 crew-to-passenger ratio.

In an exclusive interview with Cruise Critic, Windstar president John Delaney explained the reasoning behind the stretch. "They don't build ships like this anymore," he said. "These ships were so well built. The steel on these ships is almost perfect, like new. What this lets us do is add capacity in a very efficient manner compared to the length of time needed to build new ships. We can add 24 percent capacity to the fleet in a 12-month window."

Delaney is also excited about the new look of the lengthened ships. "I've always thought that the ships looked a little short and stubby," he said. "The new profile with the block added is beautiful -- more elegant and sleek."

Windstar has hired designer Ray Chung, director of design for The Johnson Studio at Cooper Carry in New York, to design new suites and public spaces. "The new suites will have a different look and feel to the existing suites, and we want them to," says Delaney. "We want to give guests a different choice."

The new suites will borrow an idea from river cruises, positioning the bed by the window and the living area closer to the door (a flip from the current suite configuration). New balcony suites will have French balconies (rather than full balconies) like the existing suites.

"The suites will feel more open and have a more modern design. It will feel like a Windstar ship but different," says Delaney.

Existing suites will receive brand-new bathrooms and sliding doors for the verandas. In addition, two new, larger Owner's Suites will be created from existing cabins; these will be three-bedroom, two-balcony suites.

The ships' larger sizes will allow Windstar to add more than just cabins to its Star-class ships. Two new dining venues will include an intimate 42-seat specialty restaurant on the side of the ship with ocean views, and a casual barbecue on the top deck, offering lunch and dinner. In addition, the Veranda Restaurant will be expanded and upgraded with a circular buffet and more seating.

The spa will be enlarged and redesigned, and the pool deck will be enhanced with a larger pool and hot tub and more deck area for sunbathing. The refurbishment will also touch onboard retail space, the tender-loading area and crew areas. Two new 90-passenger tenders will be added to each ship.

Delaney explained that many of the enhancements, such as the expanded spa and fitness center, were based on customer feedback and bring these older ships more in line with the needs of modern cruisers. "We've been secretly shopping these changes with key travel agent partners and guests, and the feedback has been overwhelmingly positive," he said.

The refurbishment won't just touch passenger-facing areas. Windstar is actually going to re-engine its ships, an uncommon procedure. The shipyard will remove seven current engines and replace them with four new environmentally friendly engines on each ship. These will use cleaner fuel, reduce emissions and provide greater fuel efficiency. Even though cleaner fuel is more expensive for cruise ships, the cost will be balanced out by the system's improved efficiency.

Plus, the new engines and efficiencies allow the ships to travel at greater speeds, so destinations that used to require too many sea days to travel there, such as New Zealand, are now options for Windstar because, as Delaney says, "we can get there with faster ships."

More details about the Star Plus Initiative will be revealed in the coming months.