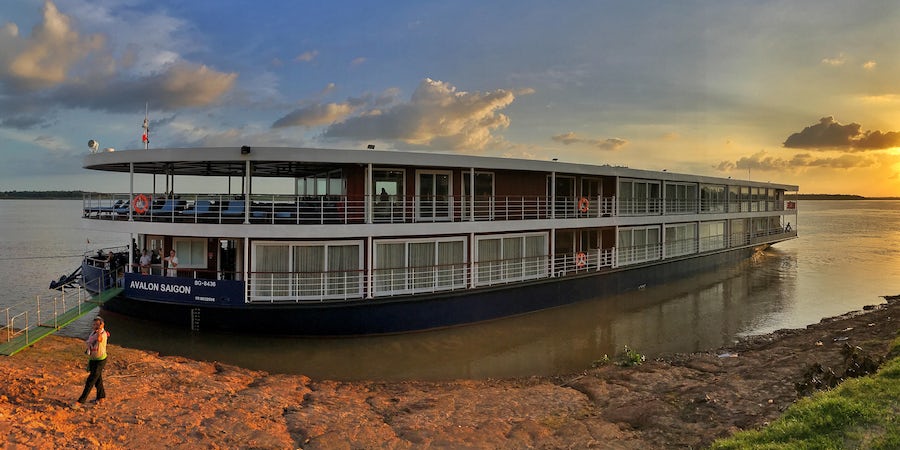 Just Back From Avalon Waterways: A River Cruise in Vietnam and Cambodia

"Vietnam and Cambodia -- why would you ever want to travel to those war-torn countries?" That's the reaction we received from friends before we went on a river cruise from Ho Chi Minh City (Saigon) to Siem Reap, onboard Avalon Waterways' newest ship, Avalon Saigon.

We don't blame them for the response. The Vietnam War and genocide in Cambodia under the Khmer Rouge regime didn't happen that long ago. Many veterans and survivors of these devastating events are still alive today, and those who recall following news reports about them have abominable images burned into their memories.

The chance to hear the stories and see the countries as they are today was part of what makes this cruise so intriguing. Southeast Asia's Lower Mekong River is not a new itinerary; besides Avalon Waterways, most major river cruise lines, including Viking, Uniworld, AmaWaterways, Scenic, CroisEurope, Pandaw and coming in 2019, Emerald Waterways, sail on it. After a week onboard Avalon Saigon, with extended land tours in Ho Chi Minh City and Siem Reap, we understand why this area of the world draws you in. Here are a few reasons why, and what makes Avalon Waterways special:

1. More time on the water, less time on tour buses.

When you fly halfway around the world, the last thing you want to do is spend time on a tour bus. Avalon Waterways is one of the only mainstream river cruise lines with ships built to sail directly to and from Ho Chi Minh City (CroisiEurope is the other, and Emerald Waterways will join them in 2019 when Emerald Harmony launches). Secondly, it's one of only a handful of cruise lines that sail all the way up to Siem Reap, in the wet season (May through October) when water levels are favorable, whereas other ships usually have to drive four-plus hours from another river port. (All ships are required to drive or even fly to Siem Reap during the dry season, which usually begins in late October/early November and lasts through April.)

All river cruise lines that sail the Mekong stop in remote villages. We liked many of Avalon's exclusive experiences, such as a meeting with a retired Vietnamese Communist (Viet Cong) captain. The line also routinely switches up the villages it visits, to keep the itineraries fresh and to avoid over-tourism/commercialization. (Note: Wherever you go, passengers are discouraged from giving money to children trying to sell products on the streets, to combat a major issue of kids dropping out of school as they become accustomed to receiving money from tourists.)

Additionally, Avalon Waterways has its own partnerships with various organizations, schools and orphanages, and other entities throughout Vietnam and Cambodia. Partnerships provide financial and developmental support; it also means tours feel far from commercialized. In Phnom Penh, for example, Avalon Waterways supports a local orphanage, from which children come onboard the ship for one night to perform traditional Cambodian dances.

The line also has a linkup with a company called Landmine Design, which educates and employs women from a poverty-stricken landmine village with full-time pay, to make jewelry and other accessories. The handmade items are for sale onboard Avalon Saigon, with all profits going back to the company.

3. Almost everything is included.

For those who've got Vietnam and Cambodia (or even Thailand, depending on the itinerary) on their bucket list, the ship offers a luxurious and comfortable means of exploring -- with a nearly all-inclusive fare that covers tours, pre- and post-cruise stays, most beverages (alcoholic and nonalcoholic) and other extras onboard.

Most importantly, though, the cruise offers an opportunity to connect on a deeper level with everyone you encounter. As rugged as they are, tours during which you get to walk through villages seemingly untouched by tourism, often along dirt roads and riverbanks, open up so many doors for priceless, unscripted moments. On our way back from teaching kids English at a small Cambodian school, for example, we bumped into one of the oldest residents in the village. He and his daughter proudly welcomed us into their home to see what a traditional layout looks like. Our guide provided translations, allowing us to have a conversation and hear his personal story of strength and courage during the Khmer Rouge regime.

4. Tours are raw, authentic -- and emotional.

On an Avalon Waterways Mekong River cruise, you're not a tourist; you become a traveler. Tours are off-the-beaten-path, focusing primarily on war history, daily life in the depths of the Mekong River, and religious practices and monuments.

While enchanting temples, mountaintop monasteries and "floating" villages made for postcard-worthy moments, not all travel is glamorous. There's a heavy emphasis on both the Vietnam War and Khmer Rouge's rule over Cambodia, given the recency of these two events, and the fact that the countries -- despite the political unrest having subsided -- still suffer significant impoverishment because of them.

Sites we visited included the War Remnant Museum in Ho Chi Minh City, which provided us with a first-hand look at the impact and effects of Agent Orange used during the Vietnam War, and the Killing Fields of Phnom Penh, where millions of lives were taken in ways that are too heinous to put in writing. These tours, combined with our meeting with the retired Viet Cong captain, and an opportunity to hear from one of the few survivors of Khmer Rouge imprisonment, were truly educational, emotional and humbling experiences.

5. You'll feel moved and empowered to share your experience.

Everyone we met along our journey who'd been affected by the wars, had the same message: Spread the word. And everyone on our cruise, ourselves included, felt compelled to do just that. Bringing history like this to life without sanitizing the facts will help ensure it's never repeated. Every country has a dark past, and as long as we confront them, our world can continue to become better.

Sharing our experience also will continue to shine light on this breathtaking destination. Although the region still suffers the effects of the wars, its growing tourism, including river cruising, is a symbol of hope and continuous perseverance for the Vietnamese and Cambodians. We were touched by their infectiously positive energy, despite what little they have. Political views become irrelevant on a trip like this; you're human, and everyone becomes family.