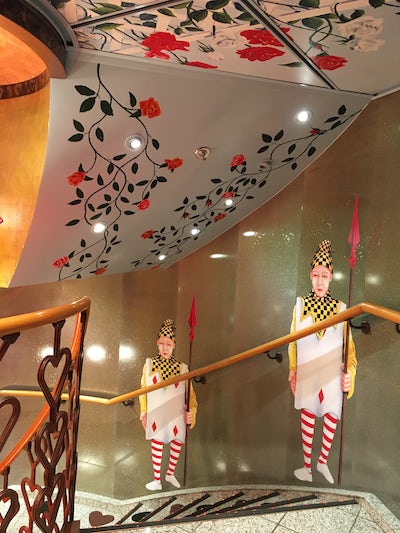 From New York to Los Angeles on the Carnival Miracle

jsmac3
First Time Cruiser • Age 70s
We were onboard the Carnival Pride repositioning cruise from LA to Miami through the Panama Canal during March 2009. Based on that experience I wrote in my review that "we want to take this trip again onboard one of the Pride's sister ships". So, when we learned the Miracle was moving to Los Angeles, we booked this cruise immediately. As it turned out, our Captain for this cruise was the same ...
Read More

nrobin
10+ Cruises • Age 80s
Overall, I would rate the resulting experience as average. We had cruised Carnival once before about 14 years ago on the "Ecstasy". The "Miracle" is enjoyed by many repeat travelers but we couldn't get excited about the operation and ship. The dEcor reminds me of an old gaudy Las Vegas casino. No one started boarding in New York City till 1430 because the ship had to be cleaned due to a threat ...
Read More

cv322
10+ Cruises • Age 70s
Carnival decided to reposition my favorite ship from NYC to the West Coast...so a year ago, when I learned of this sad news, I had to book this rare treat of a 10-day! A little about myself: I'm a solo cruiser with a cruise history of 25 past cruises on Celebrity, Norwegian, one on HAL, 13 with Carnival (6th time on the Miracle). I cruise 2 or 3 times a year, usually out of NY. Embarkation day ...
Read More

Pleased by the Miracle

jetstar1981
6-10 Cruises • Age 40s
Having previously sailed on the 2nd route for the new Carnival Breeze we were very much impressed by the Value for Money Carnival offered and when looking for a bit of warmth in March we were willing to try Carnival again. The upshot is that Carnival is unmatched in Value for Money, we purchase the lowest cabin possible for an unbelievable price with the mindset that it was probably more expensive ...
Read More

Professor69
10+ Cruises • Age 60s
On March 16, 2013, the Carnival Miracle began it's repostition to the West Coast from New York City. Embarkation was slow on this snowy afternoon in New York City because several passengers from the previous cruise got sick on their way back to New York. The illness was a gastrointestional disorder that may have been picked up in the Grand Turks becasue several other people on other ships also ...
Read More

blondebomber89
2-5 Cruises
This was my 3rd cruise. First with Carnival. My first 2 cruises were with Royal Caribbean. I am a 24yr old who traveled with my boyfriend (28), who had never been on a cruise. First off I would just like to say I was slightly nervous booking a Carnival cruise after being only on Royal Caribbean. I just always heard mixed reviews about Carnival but let me tell you, I LOVED CARNIVAL AND WOULD ...
Read More

10 Days on the Miracle

Paddy41
10+ Cruises • Age 70s
We flew into New York City, only arriving at noon so we booked the Carnival shuttle to the ship as we were worried about our flight arriving late or getting stuck in traffic in a taxi and the shuttle seemed the safest bet. I really recommend arriving at the embarkation port a day ahead. This was stressful! It took about 40 minutes from LGA to the pier and since we were not early we had no ...
Read More

SKeighley
10+ Cruises • Age 70s
Well it is finally here the vacation I have been planning since March 2012. My DH and I are young 60's who love cruising. This cruise made us platinum so embarkation was a whole new process for us. I also started a roll call forum which had grown to over 5000 posts by sailing day. Some of the sea day activities included a Poker Cabin Crawl, 2 hour Cocktail Party and 2 Slot Pulls. I have never ...
Read More

Fun times on the Miracle

cdnmr
6-10 Cruises • Age 50s
The ship was as we remembered her. Showing signs of age and not decorated to everyone's tastes but we like the layout and most of the decor. Anything we might consider tacky we considered "fun tacky". We had cabin 6236 which is the first balcony in the aft "bump out" so we had no neighbour upwind of our cabin. Chose the cabin to see if it would be quieter and hoped that at least upwind smokers ...
Read More

Review for Carnival Miracle to Bahamas

psternklar
2-5 Cruises • Age 50s
Embarcation: Got to NYC around 10:30, was assigned group 2. We were on the ship by 12:00. No problems, orderly and quick. The cruise terminal was cold. Once on the ship went to Lido for lunch. By 1:45 our cabin was ready. We were in 4142, aft, extended balcony. The cabin was a standard 185sf cabin. Plenty of storage. The bed was firm and comfortable. Our steward, Agus, was great. ...
Read More

Find a Carnival Miracle Cruise from $119