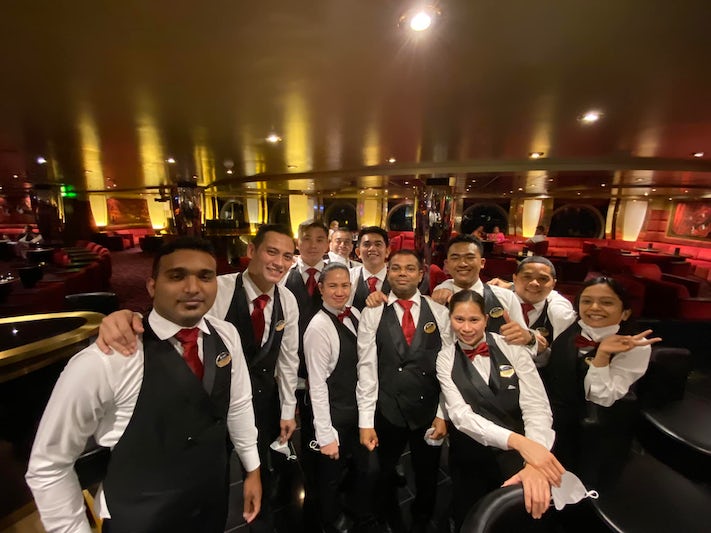 sabresimba
10+ Cruises • Age 70s
We chose this cruise as this is a new ship and we like to experience new vessels. Well where do I start ,got to southampton ,it then took 3 1/2 hours to board the ship,yes really 3 1/2 hours. Eventually got to the cabin ,guess what NO luggage,several phone calls later before cases found. Now missed dinner slot ,had to wait for second sitting hours since we had eaten,would add no tea ...
Read More

wolverton50
10+ Cruises • Age 60s
Chose this cruise due to Covid situation to avoid possible isolation on return home. Told by MSC to arrive for 11am and it took an hour and a half to get on board - appreciate that we had to have Covid tests, but the delay was partly due to the regular passengers being left outside while the Yacht Club passengers boarded. Not a great start. Virtuosa is a very beautiful ship with sparkly staircases ...
Read More

Findus Stander
10+ Cruises • Age 40s
Seasoned cruiser with family. Cruised with most of the major cruise lines, this was our first with MSC. At 4.5k for a week (outside balcony and cruise tours at all the ports) I thought is was on the expensive side. The ship is fantastic to look at and has some good venues. Dined four times in the evening at the MDR, the food was good on one occasion, average on two and poor at one. The ...
Read More

Around the UK on MSC Virtuosa - 5 nights from Liverpool

peteukmcr
10+ Cruises • Age 60s
Once MSC announced that their flagship Virtuosa was going to have her inaugural season in U.K. waters, making several sailings around the country for British residents, we wanted to sail on her. Even more attractive to us was that Virtuosa would be departing from Liverpool for selected sailings. For us this was a great opportunity to just travel for about an hour, driving 35 miles from home ...
Read More

Nowhere near as good as others

Mel Parsons
2-5 Cruises • Age 60s
We chose this cruise because it was advertised as a great cruise. The ship was marvellous. The food was only just acceptable. Tea and coffee in the buffet was always cold. The attitude towards you was more like cargo than passengers. Complained to manager but it fell on deaf ears. Getting off the ship at each port costs €18.99 each and you have to pay it no matter what. This is for the ...
Read More

Not what we expected

Laurabrij
10+ Cruises • Age 60s
To start at the beginning embarkation took over 3 hours, 2 sat in the waiting area and an over an hour queuing, the luggage got to the room before us! Muster drill was chaotic, people stood chatting and not everybody attended so it had to be repeated for them. Main dining room menus were very mixed and not appetising, presentation was very lacking (fruit platter was 4 chunks of fruit with ...
Read More

andrewjb1
10+ Cruises • Age 110s
We took a 3 night mini cruise which sailed from Hamburg, stooping in Le Havre, France and ending in Southampton. I have cruised with MSC previously so pretty much knew what to expect, whilst I would sail with MSC again, the things I don’t like about MSC were far more apparent this time. Embarkation with pretty easy, they have changed the process slightly; in the main terminal building they ...
Read More

Pokeraver
2-5 Cruises • Age 40s
We are relatively new to cruises. Our first one was to Norwegian Fjords last year on NCL in the summer and the weather was more miss than hit so wanted to go somewhere hotter this time around. We found this cruise in the summer and something to look forward to as autumn closed in and was in the half term holidays. The price was also a factor, and we had a balcony, on a Fantastica package at the ...
Read More

Vince9011
6-10 Cruises • Age 30s
This cruise was the worst of all our cruises ever. The staff was unfriendly and treated us as if we were a great inconvienence. When we embarked the ship we were not welcomed aboard and I was integrated about my boarding pass as to why I didn't have a stamp by French Police on it. Which I later found out I didn't need that and police don't give stamps... they simply then took my photo and told me ...
Read More

Fun cruise if you remember to be laid back

e_albanese1025
6-10 Cruises • Age 40s
This was our families 8th cruise and I don't typically leave reviews but I had seen such poor reviews for this particular ship I felt that I should leave my feedback. We chose the Magnifica mostly because of the itinerary (embark Southampton, Le Havre, Brugges, Amsterdam, Hamburg) and the long amount of time it stays in port. We are Americans so we flew from NY into London a few days early so we ...
Read More