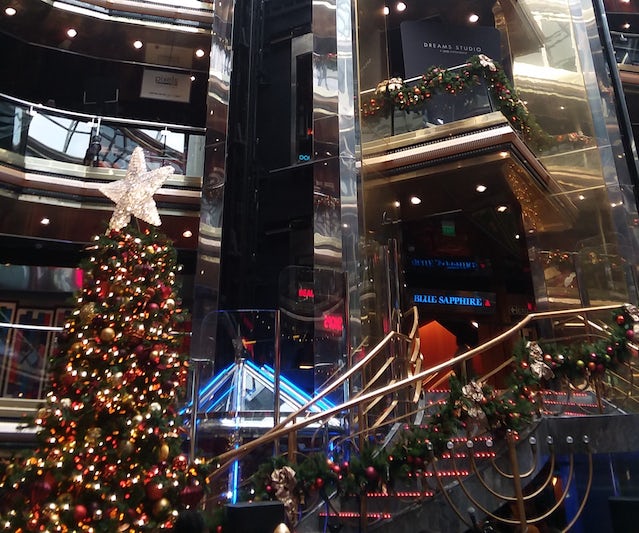 Purple68
First Time Cruiser • Age 50s
My children and I decided to take the cruise during the Christmas holiday in place of more clothes, video games, tech things they already had. Boarding the ship was okay, lots of places to "check in" with each station doing something different. But not too bad. The wait to actually get on the boat was not long either. Our room wasn't quite ready yet so we were ushered to the Lido deck for ...
Read More

MsSheldonCooper
First Time Cruiser • Age 50s
Got a Carnival gift card with some reward points - having never been on a cruise before, decided to give Carnival a try. If I had to describe the cruise in one word, that word would be GHETTO! Most of the passengers looked like escaped convicts and one was even taken off the ship in handcuffs when we arrived back in Miami. To be honest I am surprised it was only one. Embarkation was a ...
Read More

maryv83
2-5 Cruises • Age 30s
We drove from Orlando to Miami and it took us about 3 1/2 hours. The parking lot was confusing, but other than that was close to the spot of the boat. We purchased Faster to the Fun prior to boarding and I'm so glad we did. We were able to board right after the frequent cruisers, which was so fast. I recommend checking in online prior to arrival. We only waited about 10 minutes before we were ...
Read More

Had so much fun

Nicole20152015
2-5 Cruises • Age 30s
This was my 2nd cruise and my husbands 1st cruise We read all kinds of reviews about the ship and they weren't on the same boat I was. It's an older ship, however I only know that because I looked up the year it was built. We arrived in our room. We were both thrilled at the size of the room and the balcony We had a drink on our balcony and took a tour of the ship. Our favourite ...
Read More

No rating
Never again on this ship!

Pollyanna flower
2-5 Cruises • Age 50s
Ship is old pool area very small for amount of people on board One full day w/out use of pool due to leak! Food was poor quality Only one side of buffet open so long lines to get food! During cruise they were workers doing repairs and painting which blocked spaces from walking and smelling that nasty paint in the heat! Waiters did like waiting on u if u had the "cheers" card because they don't ...
Read More

Not bad for the price, too raunchy in May

NCO
2-5 Cruises • Age 40s
I found a great deal on the Ecstasy. I took my wife and 2 kids and paid a little over $1K. Not bad. When we got to the ship, the inside looks tight, like a small bus. They only had one pool. Very few shows and seems that everybody there wanted you to buy something. The first night there was a pool party and all these college kids were partying like there was no tomorrow. Too raunchy for my ...
Read More

Just an OK experience this time.. look into another boat

KS Love
2-5 Cruises • Age 30s
Overall this cruise was not my favorite. I will break it down below: First off: I would suggest not going during College/University Spring Breaks. The month of March basically. Me and my girlfriend felt we were on the set of MTV's Spring Break shows the whole time. The ONE pool on this boat was filled to capacity most of the time as well as the Jacuzzi. Screaming drunk kids running through the ...
Read More

LyndsayB
First Time Cruiser • Age 30s
My best friend and I decided to go on a cruise, this being her second cruise and my first. We are from Ontario,Canada so we decided to drive down to buffalo and spent the night at Best Western and got the park and fly package. Her car stayed at an off-site parking lot for the duration of our cruise (4 days/5nights). The hotel was going through renovations so it was nothing special to mention, it ...
Read More

maruuac
First Time Cruiser • Age 60s
My husband and in-laws just got back from our very first cruise on Carnival's Ecstasy of the Sea cruise ship. We were so excited to be taking this cruise and from what our friends have told us about their cruising experiences we were more than ready to be pampered and well fed. Unfortunately, this was not the case. Monday 2-3-14: We had an uneventful check in. Everything was quick and easy. We ...
Read More

Find a Carnival Ecstasy Cruise from $139