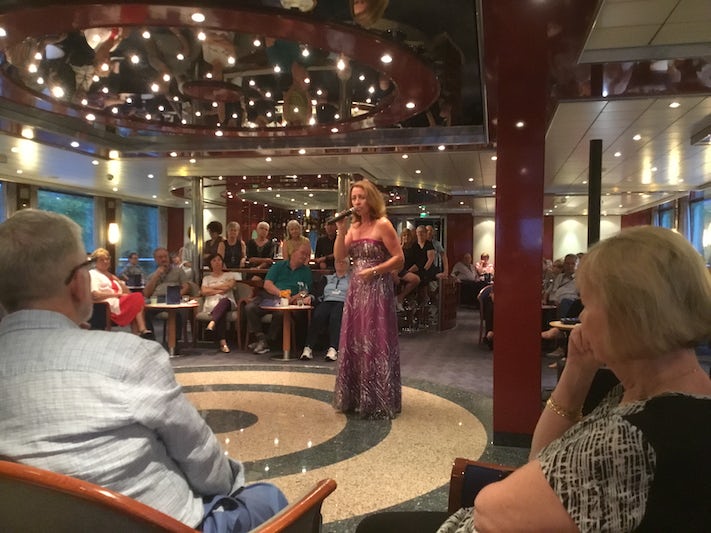 BIGGS-G
6-10 Cruises • Age 60s
Cruised the Rhine, Maine, Danube with excellent Cruise Director Gunther Caliebauf and the service by crew was second to none!! Would recommend to all ! We had good trips organised by APT were very good and included in the fare. Maybe too many churches but you always had the option to do your own thing. There was also some added visits that were an extra cost if you so desired, some were very ...
Read More

Good, but with a couple of exceptions

DPTANDT
10+ Cruises • Age 60s
We cruised from Amsterdam to Budapest, September 2019, in an Owners Suite. Overall this was a very good trip, but there were a couple of not so good features which could potentially stop us using the Jewel again. First, the positives. The Cruise director Emese was truly excellent, very approachable and hands-on throughout. We can't praise her enough, and the organisation of just about ...
Read More

River cruise convert. No more big ships for us.

Louise Kearney
10+ Cruises • Age 60s
We chose our 2 week river cruise from Budapest to Amsterdam with Travelmarvel mainly from an economic point of view. My husband and I were travelling with my sister, and the single supplement for her on APT and Scenic was outrageous, and the single cabins were on the bottom deck at waterline. With Travelmarvel, my sister paid NO single supplement (she was not therefore eligible for free airfare, ...
Read More

stephenp
10+ Cruises • Age 60s
This was a full charter from Hanau to Passau on the River Main and Canal to Passau. The ship was clean, Crew from eastern Europe and the Philipines. Most were friendly and helpful. The Food was good but the portions small. we had a Drinks package. The wines served were good and plentyful. The cabin was large and more than enough storage space, the bathroom was also larger than on many ...
Read More

Review for Princess Panhwar to Asia

Amanda Coles
6-10 Cruises • Age 50s
This was the best holiday I have ever had. The country of Myanmar is fascinating; the Burmese people are unassuming and friendly, and the culture of the country well preserved and wonderful. The service on the ship was world class yet relaxed. The staff could not have done more to assist passengers. They were ultra professional and capable, but genuinely friendly too - more so than I have ever ...
Read More

Back home after two days!

Tanya Jane
6-10 Cruises • Age 60s
We normally drive around Europe but decided that a cruise would be nice and the Rhine river goes through a very pretty area of Germany. We were doing the two week trip from Amsterdam to Budapest. 15th October to 29th October. Due to low water levels however the Rhine is currently not navigable and so on the second day whilst still in Amsterdam we were advised that a lot of the trip would be by ...
Read More

Review for Travelmarvel Sapphire to Europe - All

Yorkshire senior cruisers
2-5 Cruises • Age 60s
Never tried river cruising before as previously Ocean and Sea cruises. Route looked like it would have good trips available. Started badly as we were not informed of river level problems until we arrived at Budapest airport, whilst majority of other guests were notified and offered alternatives 2 to 3 days earlier. Had to stay at 2 Hilton hotels in Budapest and Vienna and take coach to ...
Read More

kirky52
10+ Cruises • Age 60s
We chose this trip from an Readers offers Ltd advertising literature it was supposed to be APT but we later found out that as Travelmarvel its the more budget arm of APT so you need to see APTs brochure to find out the difference.The cruise was not cheap at £6600 and that was supposed top be discounted. Glad we didnt pay full price.According to the write up we had from ROL all sightseeing ...
Read More

Review for Travelmarvel Diamond to Europe - All

mel.s.w
2-5 Cruises • Age 40s
I wanted a 2 week or longer river cruise holiday. Something that I would say after the holiday, wow that was great. I am so very happy that I went on this cruise! I am back home and I still keep in touch with a staff member. I love that I have kept in contact with them. We never really had enough time to explore the departure city, we did go on a few tours when Wie disembarked the cruise but I can ...
Read More

kateballam
2-5 Cruises • Age 60s
Always wanted to cruise the rivers and see the locks. We had done two cruises before but they were on large ships. We found this cruise ship to be a bit small. When the roof was closed due to the locks, there was only the lounge to go. Only one dining area. Food was great and service excellent. But meal times were bedlam with people rushing for tables and lines waiting for service at the buffet. ...
Read More