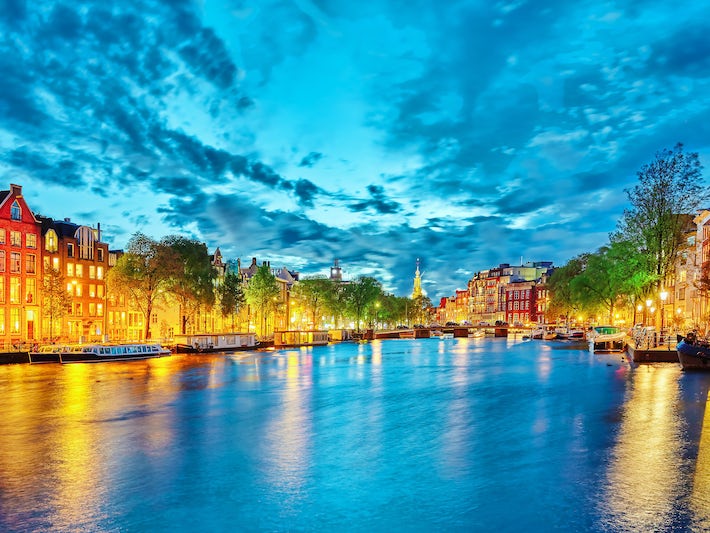 Popular Things to Do in Amsterdam

Amsterdam is a picturesque city in the Netherlands with lots of culture and history for both river and ocean cruisers to explore and enjoy. There is so much on offer here, cruisers who are in port for just a day will need to plan carefully and consider booking a shore excursion to get to important landmarks like the Anne Frank House, the city's outdoor markets and its many art museums like the Rijksmuseum and Van Gogh Museum. Many excursions also include a boat ride on Amsterdam's famous, winding canals. Be sure to cruise during April or May if you're looking to book a coveted shore excursion to Keukenhof, the world's premiere tulip garden.

Peak cruise season is during the summer months in Amsterdam, but the city is appealing and less crowded during the spring and fall. Winter temperatures rarely dip below freezing, and it's a great time for cruisers to score good deals. Currency is the euro and while Dutch is the official language in Amsterdam, nearly everyone speaks English as a second language.

Find Things to Do in Amsterdam on Viator

Food and Drink in Amsterdam

Cafe Americain (American Hotel, 97 Leidsekade, 020 556 3010) is an Art Deco rendezvous, one of the city's most popular spots for everything from a cup of coffee to a full dinner. There's a big outdoor terrace on Leidseplein in summer and it's open from 7 a.m. until 10 p.m., daily.

De Oesterbar (Leidseplein 10, 020-623-2988) is the city's longtime favorite seafood restaurant in a setting of white tiles and fish tanks. Fish is delivered fresh twice daily, and used in indigenous preparations like sole Danoise with tiny Dutch shrimps and sole Veronique with Muscadet grapes. It's open 5:30 p.m. until 11 p.m., daily.

Dutch pancakes are a treat that should not be missed, and the Pancake Bakery (191 Prinsengracht, 020-625-1333) is one of the classic places to sample delicious dinner-plate-size crepes with fillings like ham and cheese as a main dish or fruits for dessert. The bakery is open from 9 a.m. until 9:30 p.m., daily. This is a great choice for families, but large groups should make reservations in advance.

If you are in town late enough for dinner, sample a Dutch specialty -- an Indonesian rijsttafel (rice table) -- at Tempo Doeloe (Utrechtsestraat 75, 020-625-6718). Inspired by the days of the Netherlands East Indies company, it consists of a dozen or more small meat and vegetable dishes served with condiments and rice. It's open Monday through Saturday, 6 p.m. until 11:30 p.m., reservations required. Another solid rijsttafel option is Sampurna (Singel 498 1017), open from 12 to 11 p.m.

A Canal Boat Cruise: A cruise aboard a glass-topped canal boat is the best overview of the fine gabled homes and many picturesque bridges that make this city unique. Boats also take you into the busy harbor. The ride is romantic on nights, in season, when the bridges and facades are lit. Tours last about 1.5 hours and depart frequently from the harbor in front of Central Station.

The Rijksmuseum: This world-class museum reopened in 2013 after several years of renovations. It houses paintings by Hals, Vermeer, Steen and Rembrandt (including his "Night Watch"), as well as highlights of the Golden Age like silver, delftware and exquisitely furnished doll houses.

The Van Gogh Museum: The world's largest collection of works by the Dutch master is found here, along with paintings by Van Gogh's contemporaries -- Gauguin, Toulouse-Lautrec, Monet, Sisley and others. Highlights are 18 paintings from the two years when Van Gogh lived in the south of France. It is generally considered his best work, with familiar images such as "The Yellow House," "Vincent's Bedroom at Arles," "Sunflowers" and "Self Portrait with Pipe and Straw Hat."

The Anne Frank House: Many decades after World War II, a line still forms almost every day with visitors waiting to view the small, hidden rooms where 13-year-old Anne Frank wrote her famous diary. Eight people, family and friends, lived in this space, hardly daring to speak aloud for more than two years, hoping in vain to escape the Nazis. The bare rooms have lost none of their impact or poignancy with the passage of time.

Shopping: Amsterdam has shops to appeal to everyone. Traditional, large department stores, such as the Bijenkorf, are near the Dam Square, and Magna Plaza (just behind the Royal Palace) is a historic building that has been converted to a luxurious shopping center. Exclusive designer fashions are found on P.C. Hooftstraat and other streets near the Rijksmuseum, while Rokin Street and the Spiegelkwartier are centers for the city's many antique shops. The Nine Streets, close to Royal Palace, are also great for fun finds.

Most fun for browsing are the small streets between the main canals, lined with intriguing little shops and galleries that have made the city increasingly known for its young, cutting-edge fashion and design. Frozen Fountain (Prinsengracht 645) and Droog Design (Staalstraat 7a/b) are good places to see some of the best work of new interior designers.

Many of the diamond dealers offer demonstrations of how a diamond is cut and polished, fun to see even if your budget doesn't allow for a solitaire on this trip. The "Shopping in Amsterdam" brochure available at the tourist office offers a plan of numerous shopping areas around town.

Editor's Note: If you spend more than 50 euros in a store, you are entitled to a refund of the value-added tax (VAT), which amounts to 19 percent of the bill. (Shop where you see the Global Refund Tax-Free Shopping sign and remember to ask for the Global Refund Cheque.) A lower rate of 6 percent applies for certain goods and services, such as food products, books, medicines, art, antiques, entry to museums, zoos, theaters and sports. When leaving the country or the European Union, show your purchases, receipts and passport to customs officials and have your Global Refund cheques stamped.

Rembrandt's House Museum: This is an atmospheric reconstruction of the 1639 home built when Rembrandt was at the height of his fame, furnished with items and works of art from the master's time. Rooms include his kitchen, his studio, the workroom where he did his meticulous etchings and a gallery displaying dozens of them. Demonstrations show how pigments were ground into paint in earlier days, and a modern-day master is on hand to show the painstaking techniques of etching, guaranteed to leave you with a greater appreciation of this art.

Royal Palace: This one-time city hall, built in the mid-17th century, was transformed into a palace by Napoleon Bonaparte's brother, Louis, when he was king in the early 19th century. Though it is the official royal palace, no one lives there; it is used today only for ceremonial events, and it's open to the public.

The Red Light District: You've heard about it, so you might as well see the blocks, just behind the Oude Kerk (old church), where ladies of the night dressed in scanty underwear are sitting in the windows, waiting for customers. Prostitution is legal in Amsterdam -- the ladies pay the same taxes and enjoy the same police protection as all other residents. While more unsavory at night, the narrow streets are safe to walk in daytime, and the windows seem to be occupied around the clock. Just watch for pickpockets, and remember that taking pictures is forbidden. Those interested in learning more about the district can book a tour, day or night, through a private operator. This is also the area where you'll find tattoo shops, piercing parlors and "adult" stores. But, those interested in the less-seedy side of the district have options, too; it's also a great place to find stellar food and fashion.

Other Museums: It would take at least a month to visit Amsterdam's more than 50 museums, but depending on your interests, there are several more major attractions. The Stedelijk Museum of Modern Art, which has a new home after taking up temporary residence in an old post office, continues to offer provocative exhibits. Along with interesting displays, the Jewish Historical Museum has a beautiful setting, a restored building that is the oldest public synagogue in Europe. The Hermitage often brings rare traveling exhibits from its home museum in Russia. The Amsterdam Museum, housed in the 17th-century buildings of the former city orphanage, illustrates how a small fishing village became a world power and offers paintings by many Dutch masters in the context of their time and place, complete with interactive exhibits. Paintings also are hung in the covered street between buildings; this passage is free and also connects to a fascinating little enclave of 14th-century homes, the Begijnhof, which is also free.

Historic Churches: Three of the city's oldest churches are worth looking into. The Oude Kerk dates to the 13th century and has beautiful stained-glass windows. The 14th-century Nieuwe Kirk -- which means "new church" -- is anything but! The late-Gothic-period church has many features of note, including a handsome pulpit, and hosts revolving modern art exhibits and music concerts. Westerkerk, built between 1620 and 1630, is considered a masterpiece of Dutch Renaissance style, and is the scene of summer concerts played on a 300-year-old organ. Visitors can go up into the tower, a landmark in the shape of a crown, for a clear city view.

Markets: The Floating Flower Market on the Singel Canal is a colorful sight, packed with fresh-cut flowers year round. The Kunst & Antiekcentrum de Looier is a big indoor market, held on Saturdays in old warehouses along the canals in the Jordaan section. The Sunday Art Market at Thorbeckeplein offers a mix of paintings, sculpture and jewelry by local artists. The Book Market on Fridays at Spui features second-hand books, the stamp market on Nieuwezijds Voorburgwal takes place on Wednesday and Saturday afternoons, the bird market at Noordermarket is a colorful sight on Saturday mornings, and the Waterlooplein Flea Market has a little bit of everything, including junk; some vendors are out almost daily, but summer Sunday mornings are the time to snag better antiques and books.

The Aalsmeer Flower Auction: The world's largest flower auction takes place Monday through Friday in Aalsmeer, not far from Schiphol Airport, from 7 a.m. to noon. Get up early to see the best of the action. Thirteen mammoth bidding clocks go at once in five buildings as millions of tulips and daffodils are wheeled by; buyers must be quick, as the first bid stops the clock. Bus #172 from central station will take you to Aalsmeer; allow an hour for the trip.

Keukenhof Gardens: Especially in April and May, this 79-acre park, maintained by an association of Dutch bulb growers, is one of the world's most glorious gardens, featuring some seven million colorful tulips, daffodils, hyacinths and other bulb flowers in artistic array. Tours from Amsterdam are usually available to the garden, located about an hour away in Lisse. If you are in Amsterdam in season, don't fail to ask the tour director about arrangements.