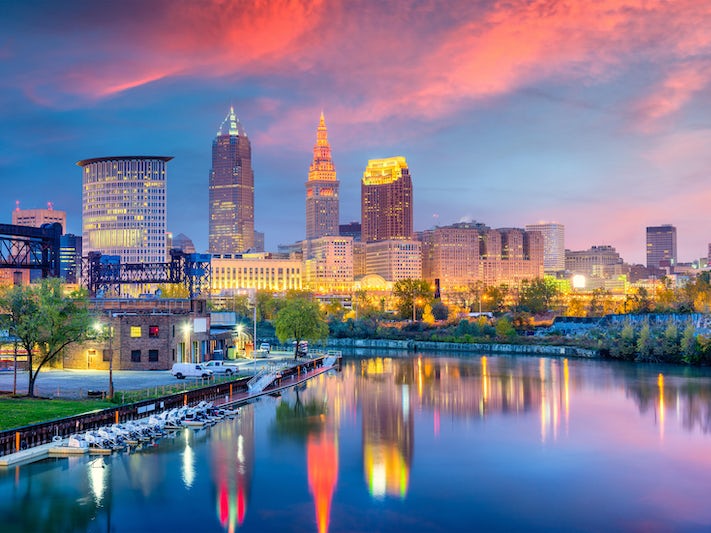 Popular Things to Do in Cleveland

Find Things to Do in Cleveland on Viator

Food and Drink in Cleveland

Seti's Polish Boys: Cleveland is known for its ethnic food scene, especially Eastern European, and there are a few local staples you might want to try. The Polish Boy is a charred-to-perfection kielbasa (a Polish sausage) in a bun, topped with coleslaw and French fries. The whole thing is doused with barbecue sauce. You can taste test one at Seti's Polish Boys (W 4242 Lorain Ave.).

Pierogi Palace: A traditional pierogi stuffs potatoes and cheese into a pan-fried dumpling. You can find trendy versions filled with crab or cheesesteak at various vendors, such as Pierogi Palace, in the West Side Market.

Seven Roses: Then there is paczki, a deep-fried doughnut filled with jam. Check them out at Seven Roses (6301 Fleet Ave.).

Chocolate 76: Give buckeye candy a go; it's a ball of peanut butter dipped in chocolate that's made to look like Ohio's buckeye nut. Buy a box for yourself or as a fun souvenir at Chocolate 76 in The Arcade.

West Side Market: The historic West Side Market (1979 W. 25th St.) is an indoor (it gets cold here in winter), European-style food hall open to the public. A century ago, it was an open-air market catering to Cleveland's immigrant community. Today, foodies browse more than 100 vendors in the yellow brick halls for ethnic treats ranging from Hungarian sausages to Middle Eastern baba ghanoush made with eggplant and olive oil.

Boney Fingers BBQ: Cleveland barbecue has its following, too. Within walking distance of the cruise dock is Boney Fingers BBQ (401 Euclid Ave.) in The Arcade shopping center. Smoked meats are the big deal here, and they're smoked fresh every day. Open for breakfast and lunch on weekdays only.

Rock & Roll Hall of Fame: The world's only Hall of Fame devoted to rock 'n' roll honors the genre's greatest stars. You can hear their hits and see their guitars and stage costumes. Or watch hours of videos of Elvis, the Beatles, Rolling Stones and countless other colorful performers. (1100 Rock and Roll Blvd.; 216-781-7625; open daily 10 a.m. to 5:30 p.m., Wednesday until 9 p.m.)

Great Lakes Science Center: Attractions include a tour of the William G. Mather steamship, built in 1925, to see what life was like on a working Great Lakes freighter. Explore the cargo holds, pilothouse and guest quarters. Head to the NASA Glenn Visitor Center for a look at artifacts from space exploration. (601 Erieside Ave.; 216-694-2000; open Monday through Saturday, 10 a.m. to 5 p.m.; Sunday, noon to 5 p.m.)

Cleveland Museum of Art: Part of a square mile of museums found in University Circle, the art museum is renowned for its collection of Asian and Egyptian works. The permanent collection spans 6,000 years and numbers more than 45,000 works from around the globe. The adjacent Wade Park displays sculptures in an outdoor garden. Admission is free. (11150 East Blvd.; 216-421-7350; open Tuesday, Thursday, Saturday, Sunday 10 a.m. to 5 p.m.; Wednesday and Friday from 10 a.m. to 9 p.m., closed Mondays)

Cuyahoga Valley National Park: If you're looking to spend a day surrounded by nature, this national park along the Cuyahoga River and 20 miles south of Cleveland could be for you. Walk or ride a bike on the Ohio and Erie Canal Towpath Trail, a restored section of the canal's original towpath. In the park's north, the Canal Exploration Center fills you in on the history of the 19th-century waterway. Take a ride through the park on the Cuyahoga Valley Scenic Railroad, open Wednesday through Sunday in the summer. The park is open daily, but you'll need a rental car to visit.