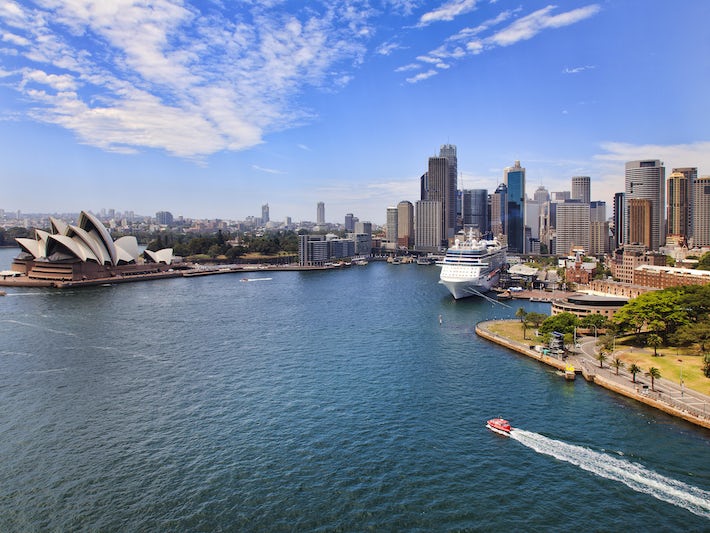 Popular Things to Do in Sydney (Australia)

Sydney is the largest city in Australia, and thanks to several of its major sights -- including Sydney Harbour and Olympic Park -- it's arguably one of the most recognizable cities in the world. Cruisers with a port stop in Sydney absolutely must explore Harbour Bridge and the Sydney Opera House to see the incredible architecture up close. Shore excursions to Oxford Street for some shopping and dining, or a trip to the world-famous Bondi Beach, are great options as well. If you're a beach-lover, you might also consider picturesque Manly Beach, which is more popular among locals and decidedly less touristy than Bondi. Just keep in mind that Sydney is an expensive city -- you'll want to plan accordingly.

Sydney enjoys mostly pleasant weather year-round -- it is a sunny destination, ideal for partaking in outdoor activities. The official language is English, though Aussies do have a distinct accent that can be difficult to understand. Currency is the Australian dollar.

Find Things to Do in Sydney (Australia) on Viator

Food and Drink in Sydney (Australia)

There are so many -- and so many kinds -- of restaurants, pubs and cafes in Sydney that it's hard to go wrong. Here's a guide to neighborhoods (or, as Australians say, "eat streets") where there is a fun variety of restaurants from which to choose.

In the Central Business District, there are a number of waterfront cafes ringing Circular Quay. A popular spot (especially during inclement weather) is the food hall at David Jones, which offers a'la minute eateries, ranging from oysters and Champagne to grilled fish and a wine bar.

Fashionable and trendy cafes and restaurants abound in city neighborhoods like Paddington, Surry Hills, Darlinghurst and Double Bay. Among the best options there are Gertrude and Alice (78 Oxford Street, open 8 a.m. until 9:30 p.m.), a bookstore with an attached coffee shop, and the Victoria Room (235 Victoria Street), an upscale destination specializing in great tapas dishes and even better cocktails. (Open daily 6 p.m. until 11 p.m. and for high tea from 2 p.m. until 4 p.m. on Saturdays and Sundays).

The Rocks offers elegant restaurants with historic atmosphere. Rockpool (107 George Street, open from 6 p.m. until 10 p.m.) and Altitude (176 Cumberland Street, open Monday through Saturday from 6:30 p.m. until 10:30 p.m.) both create superior meals prepared by chefs that have garnered considerable attention from international critics for their Australian cuisine. The fresh seafood is exceptional at both locations.

Head to Woolloomooloo Wharf for superb food and even better views. The row of restaurants along the wharf includes China Doll for Asian fusion (open Monday through Saturday from noon until 3 p.m. and from 6 p.m. until 10:30 p.m., and Sunday from noon until 8:45 p.m.) and the Italian Otto's (open daily for lunch and dinner).

Manly and Bondi are known for fresh seafood and many outdoor cafes that line their beachfronts. Try the fish and chips, especially at Fishmongers in Bondi, which serves the best battered barramundi in town. (262 Campbell Parade, open daily from 11:30 a.m. until 9:30 p.m.). Another great spot, this one in Manly, is Moo Burger (70A Campbell Parade).

Darling Harbour's King Street and Coco Bay wharves have such mind-boggling variety that there's something for everyone. The wharves' collection of 14 restaurants and bars includes everything from the London's cheap noodle chain Wagamama to classy lounges like The Loft and Cargo.

For ethnic cuisine, head to Glebe (Glebe Point Road) where there are numerous Mediterranean, Asian and Middle Eastern restaurants.

Manly, accessible via a 30-minute ferry ride from Circular Quay, offers scenic walking, watersports ranging from kayaking to standup paddleboarding, and numerous cafes and restaurants. Beyond sunbathing, rent a bicycle and explore Sydney Harbour National Park and North Head, which overlooks the spot where the ocean meets the harbour. (We had an excellent experience with Manly Bike Tours, which offers cycles for independent rides and also guided tours.) Or take a hike on the famous walk from Manly to the Spit Bridge (about three hours one-way). The roundtrip cost of the ferry on our most recent visit was $18.

Bondi Beach (reachable by bus from Circular Quay) is Australia's best known, with lots of restaurants, shops and cafes. It's also the most crowded strip of sand in Sydney, fulfilling every notion of what Australian beach culture should be. Just don't be offended if you see half-naked women working on their tans, because topless sunbathing is accepted and common here.

A hiking path cuts through the cliffs between Bondi and Coogee, another beach suburb several miles south. The walk can be strenuous, but the views of the seemingly endless Pacific Ocean from the top of the cliffs are unbeatable, and there are several other beaches to make rest stops at along the way for a refreshing drink or swim. Looking out across the water makes you remember that you really are halfway around the world and thousands of miles from home.

Take a tour of the world-famous Sydney Opera House. There are a handful of varieties (backstage, historic and what is called the "tour de force" for travellers with special interests in architecture, engineering or the arts). Guided tours are conducted between 8:30 a.m. to 5 p.m. daily. Of course, schedule permitting, travellers can also take in a show.

The most notable building in the CBD is Sydney Tower, a distinctive needle-shaped construction with a turret at its pinnacle that contains a revolving restaurant and outdoor observation deck. Visitors can do the Skywalk along its outer edge, while harnessed in, for 360-degree views -- twice as high as the more famous Sydney Harbour Bridge Climb.

A few blocks from the tower is the Sydney version of Hyde Park, which is much smaller than its British namesake but definitely worth a visit for a stroll down one of its broad avenues lined with figs. Also appealing is the Queen Victoria Building, a former concert hall and municipal building now converted into a shopping centre. It features ornate Byzantine architecture and several worthwhile shops, but visitors with limited time in the city would be better rewarded by travelling to one of Sydney's inner suburbs, such as Paddington or Bondi Beach or catch the ferry to Manly.

The Sydney Harbour Bridge Climb is not your ordinary stroll across a bridge and not just for the young and crazy. The 3.5-hour trek up and down the famous landmark is safe, slow and suitable for people of all ages and fitness levels; you'll don a bridge suit and wear a bridge harness along the ladder-like stairways and narrow catwalks. The climbs are guided tours and are offered during the day as well as at night. There are lots of rules and regulations, including: no kids under 10 (and children aged 10 to 16 must be accompanied by an adult), no women more than 24 weeks pregnant, climbers must wear rubber soled shoes, and all climbers must pass a breath-test (for a blood alcohol limit of less than .05 percent). Note: the status of the Bridge Climb is unclear after September 30, 2018.

From the bridge, visitors can walk around the inlet to tour the Opera House. It is easy to continue from there through the lovely Royal Botanical Gardens, a collection of flowers and trees overlooking the water, where it is possible to see some of Australia's unique flora without having to leave the city.

Get your bearings in Sydney by taking a ride on the Sydney Explorer bus, an air-conditioned motorcoach that offers commentary (and hop-on, hop-off) options. The service stops at Circular Quay daily at 18-minute intervals, beginning at 8:40 a.m. You can also board the Bondi Explorer, which offers the same kind of service to areas outside of the city, including Bondi Beach and the eastern suburbs. The Sydney Pass Network also offers a harbour ferry ride (morning, afternoon and evening).

Take a guided or self-guided walking tour of The Rocks, Sydney's birthplace (it dates back to Sydney's beginnings as a British convict colony). There are numerous historic buildings and sites; plus, the neighbourhood is a lively one, with many shops, restaurants and bars. Today, the narrow, twisting streets are free of criminals and fun to wander through. The shops here sell every kind of Australian souvenir imaginable, but the best come from the Rocks market, which is full of handcrafted and unique mementoes.

Darling Harbour has Harbourside shopping and dining complex on one side, but it is also a nexus for tourist attractions such as the Sydney Aquarium (open daily 10 a.m. until 6 p.m.), the IMAX Theatre (closed for refurbishment), the Australian National Maritime Museum (open daily from 9:30 a.m. until 5 p.m.) and the Powerhouse Museum (open daily 10 a.m. until 5 p.m.), which focuses on creativity in art, technology and science. There are also exhibitions, displays and impromptu music performances, plus numerous restaurants grouped around King Street Wharf. Also worth a visit is the Chinese Garden of Friendship (open daily from 9:30 a.m.), which features winding pathways, meandering waterways and exotic flora and fauna.

Visit Sydney Wildlife World, an exhibit of Australia's most exotic critters and plants (open daily from 9 a.m. until 5 p.m.). You won't be able to find wild koalas lounging around Sydney, but you can get up close with them at the koala sanctuary. The park includes nine sample habitats, such as the Rainforest and Wallaby Cliffs, that supply a peek into different climates and animal homes around Australia. The Sydney Aquarium is right next door, and combination ticket deals are available.

Get out on the water via Harbour Jet (departs daily from the Convention Jetty in Darling Harbour). It's not for the faint of heart -- the speedboat ride offers some commentary, but the real fun are the 270-degree spins, wild fish tails and other boat-acrobatic manoeuvres. Captain Cook Cruises offers a gentler ride; there are two daily.

See Sydney from above on a helicopter or seaplane tour. The tours are offered by several different companies and last up to two and a half hours. They offer views of Sydney's entire extensive coastline, as well as the harbour, the city and even the Blue Mountains out to the west.

Shopping options in Sydney include central areas like Pitt Street Mall, downtown and Castlereagh Street (from Hunter Street to Goulburn Street) for chi-chi designer stores. Also include the aforementioned Rocks and Darling Harbour, Oxford Street and Five Ways in Paddington. Sydney also has an excellent collection of weekend outdoor markets. Glebe holds its version every Saturday, while Bondi hosts a market each Sunday.

Want more art? Sydney's Paddington (Oxford Street from South Dowling Street towards Bondi) has a cluster of galleries and is also home to exclusive boutiques, cafes and restaurants. Other attractions include Centennial Park and Saturday's Paddington Bazaar street market with unique fashions (many iconic local designers began there), crafts and foodstuffs.

A slightly different kind of museum is the Powerhouse, which is devoted to celebrating outstanding technology and design. An old power station in the former industrial district of Ultimo has been converted into Australia's largest museum. Exhibitions change continuously (recent topics have ranged from the Great Wall of China to Australian pub history), but are always fascinating, interactive and well-planned.

If you have a couple of days to spare, drive out to the Blue Mountains, where draws include beautiful scenery, bushwalking, rainforests, waterfalls, a scenic railway and more. The area is an hour and a half by car from Sydney. It's also a very romantic destination with lots of intimate inns.