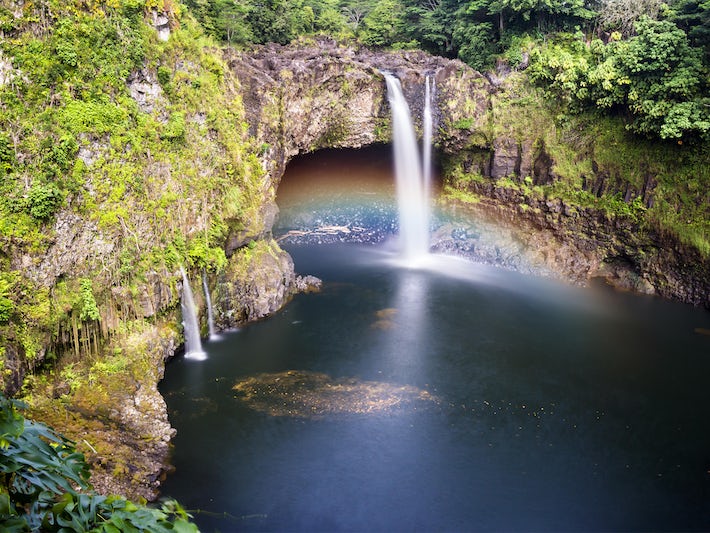 Find Things to Do in Hilo on Viator

Popular Things to Do in Hilo

Food and Drink in Hilo

Hilo has dining options that span the culinary map -- some throwbacks and others that are carving out new frontiers.

Longtime local favorite Blane's Drive Inn offers up traditional plate lunches that feature Korean-style chicken, grilled ahi, fried akule (a fish) and chicken katsu, a crispy chicken cutlet. The meals usually include miso soup and rice. Other menu items are teriyaki burgers, sweet and sour ribs and fried egg noodles. The drive-in is also home to one of Hawaii's most famous comfort foods, the loco moco: white rice, a hamburger patty, an egg and gravy all over. It's great for a quick, inexpensive bite. Seating is outside. (217 Waianuenue Avenue; open daily from 5 a.m.)

With its kicky digs, fresh ingredients, provocative meal presentations and top rating from Zagat, Cafe Pesto is a real treat. The restaurant, popular with locals, features an extensive menu and beverage list. Among the offerings: Asian-Pacific appetizers and salads, wood-fired pizzas, pastas and fresh island seafood. "Fresh" is the operative word when it comes to this casual restaurant; it's also nicely priced. (308 Kamehameha Avenue; open daily from 11 a.m.)

The black-sand Bayfront Beach in downtown Hilo isn't the most pristine stretch, so it's typically best to explore Hilo's other two beaches. Each of these requires a short taxi ride.

Best Beach for Chilling: The black-sand Richardson's Ocean Park is a locals' favorite, featuring a revived surfing ground and gentle waters. Just around the bend, however, the waves can be unforgiving. It's not unusual to spot a sea turtle, dolphins or, on occasion, a humpback whale traveling through the area, part of which is a marine conservation district. This beach is good for snorkeling and swimming. It features lifeguards, restrooms, showers and coconut trees for shade.

Best Beach for Children: Onekahakaha Beach Park is a small, shallow, sand-bottomed ocean pool, considered one of the safest swimming areas along the Hilo coast. With its tide pools and inlets, it's a good place to look for Hawaiian marine life like sea urchins and anemones. It offers some white sand and easy access to the water. Amenities include lifeguards and restrooms.

The city proper has a population of more than 45,000, but historic downtown Hilo exudes an engaging small-town charm that makes you feel right at home. Best yet, it's eminently walkable. You can pick up a terrific self-guided walking tour at the information center, or download it in advance.

The big surprise there is the existence of not one but two fascinating museums. Pacific Tsunami Museum is located in an old bank building that survived the 1946 and 1960 tsunamis, which destroyed much of the town, killed dozens and reshaped Hilo's social and economic infrastructure. Some of the volunteers at the museum are tsunami survivors. A "wave machine" lets you experience the energy of moving water, and a 23-minute video played in a former bank vault chronicles the stories of survivors. (130 Kamehameha Avenue; open Monday to Saturday, 9 a.m. to 4:15 p.m.)

In stark contrast, the Lyman Museum and Mission House explores Hawaii's social and natural history, along with a deep dive into its missionary past. The museum is a Smithsonian Institution affiliate. Of particular interest is the mission house, built in the 1830's by David and Sarah Lyman, missionaries from New England. The Georgian-style building is the oldest standing wooden frame house on the island and is listed on the National Register of Historic Places. The house is outfitted with some of the couple's original furniture and artifacts. (276 Haili Street; open Monday to Saturday, 10 a.m. to 4:30 p.m; docent-led tours of the house scheduled at 11 a.m. and 2 p.m.)

The National Oceanic and Atmospheric Administration's Mokupapapa Discovery Center is a surprising little gem, offering a portal to the beauty of the Northwestern Hawaiian Islands. The center's 4,000 square feet of interactive and informative displays include a look at unique Hawaiian fish in a 2,500-gallon aquarium and a mock deep-sea research submersible. It will also make you consider the effects of sea debris, especially plastic. (308 Kamehameha Avenue, Suite 109; open Tuesday to Saturday, 9 a.m. to 4 p.m.)

With 150 miles of trails, Hawaii Volcanoes National Park, a 45-minute drive from the port, is the ultimate eco-tour. The 520-acre park is host to Kilauea and Mauna Loa, two of five volcanoes on the island. Kilauea is the most active volcano on the planet. Rangers lead daily walks into different areas of the park. The best place to start a visit is at the Kilauea Visitor Center (open daily, 7:45 a.m. to 5 p.m.) Volcano, a charming village adjacent to the park, is also worth checking out (Note: Hawaii Volcanoes National Park is closed until further notice, due to earthquakes and eruptions)

If you're a serenity-seeker, check out Lili'uokalani Gardens and Banyan Drive. They are located on beautiful Hilo Bay. The grounds represent Hilo's spiritual signature. More than 50 of the exotic banyan trees, planted by visiting celebrities like Amelia Earhart, Babe Ruth and King George V, line the drive. As for the gardens, they were designed to honor Hawaii's first Japanese immigrants. You'll see a ceremonial Japanese tea house, Japanese gardens, gazebos, statues, and bridges.

To top it all off, walk through Lili'uokalani Gardens, and turn left at the sign for Moku Ola or Coconut Island. The tiny isle, accessible by footbridge, was visited by ancient Hawaiians when they were seeking a cure from ills. Moku Ola means "healing place." Also in ancient times, it was a place of refuge for law-breakers looking for asylum and forgiveness. Today, it's a popular spot for fishing and relaxing. (Note: To maximize your time there, consider hiring a taxi to drive you along Banyan Drive.)

If you're feeling whimsical, the East Hawaii Cultural Center is worth a quick look. Located in a former police station and courthouse, it houses an array of rotating collections and juried art shows. As an example, an annual Trash Art Show is staged in October and features works made from recycled trash. Local crafts are also sold at the center. (141 Kalakaua Street; open Monday to Saturday, 10 a.m. to 4 p.m.)