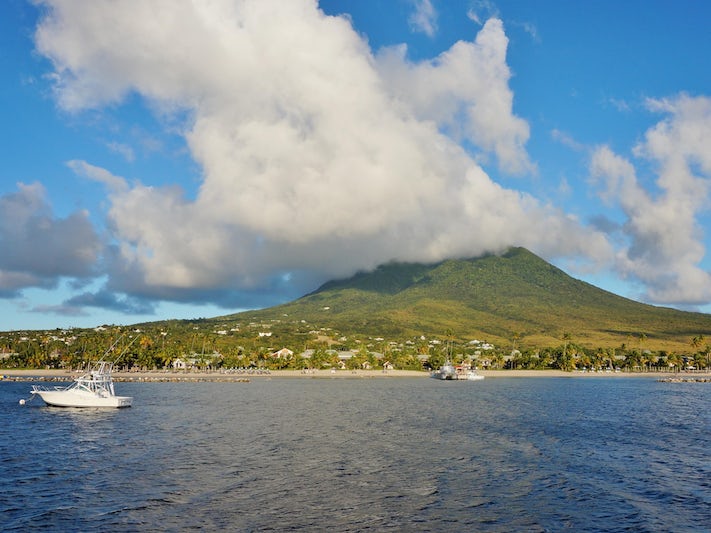 Find Things to Do in Nevis on Viator

Popular Things to Do in Nevis

Food and Drink in Nevis

If you like funky and arty ambience, check out the aforementioned Cafe des Arts in Charlestown, right next to the Museum of Nevis History (and walkable from the tender dock); opt for casual fare. Another casual in-town option is the Downtown Cyber Cafe (both an Internet center and a cafe); it offers sandwich-style fare and one hot dish a day, which is the highlight -- you know you're getting some Nevis cuisine. Options, depending on the day, include beef and cheese, seafood, lasagna, grilled snapper, and barbecued ribs.

At Pinney's Beach there are a variety of places. Nearest the tender pier (see the 10-minute walk option above) is Double Deuce (near Pinney's Beach Hotel). Value for money, locals say it's the best restaurant on the beach; the chef used to work at the far more upscale Montpelier's Plantation Inn so he's serving high quality food at bar prices. Next is Chevy's, a locals' joint (known for Caribbean mutton and wings). Beyond that is the famous Sunshine's. And if upscale calls, the last restaurant bar on Pinney's is the Four Seasons' Mango; it is built out over the water and offers fabulous views of St. Kitts.

The aforementioned Martha's in the Garden at the Botanical Garden Nevis.

Best Beach for Active Types: At Oualie Beach, you can rent all manner of watersports equipment, from sunfish sailboats to kayaks. You can even rent mountain bikes (for inland exploring, natch)! This is also a central location to hook up with scuba diving, deep-sea fishing and snorkeling trip operations. At the Sea Life Education Center you can sign up for a half educational, half action-oriented program called "Touch and Go"; folks learn about the underwater environment here and then don snorkeling equipment for a guided experience. Or, check out the petting zoo at the Nevis Equestrian Center.

Best Beach for Relaxin': At Pinney's Beach, you can find free lounge chairs and the island's most hopping bar/restaurant: Sunshine's.

Best Beach for Romantics: Lover's Beach, on north side of the airport near Hurricane Hill, is secluded.

In Charlestown, a place that is resolutely locals-oriented save for a couple of tourist shops on the waterfront, the main attractions surround the Alexander Hamilton Birthplace (Low Street, weekdays from 9 a.m. until 4 p.m; Saturdays from 10 a.m. until 4 p.m., closed Sunday). Did you know that the American patriot was born here? His father was a Scottish colonialist who settled in Nevis; the family ultimately moved to St. Croix and from there Hamilton, who was killed in a duel with Aaron Burr (remember those American history classes?), moved on to New York, where he studied at the precursor to Columbia University. Still, he's Nevis' greatest historic achiever.

From the tender pier, head left along the waterfront; it's about three blocks beyond. A reconstructed 17th century manor on the waterfront, the museum contains various artifacts (Hamilton spent the first 17 years of his life here before heading to colonial America). The space also includes the Museum of Nevis History.

What's just as intriguing is the nearby art gallery. Cafe des Arts offers fabulous fun, take-home souvenirs from original artwork by noted regional painters (my favorite is St. Kitts' Kate Spencer), ceramics, and other fabulous tchockes. It's also a cafe, as the name suggests, and each of its whimsically mismatched table setups is located under a different tree in the expansive yard that borders the seafront. For a quick snack, try the sandwiches; breakfast is also available.

Bocane Ceramics and Gift Studio offers charming locally designed and created bowls, mosaics and other functional art pieces. It's within walking distance from the tender pier (it's on Main Street; upon reaching Main from the tender pier, turn right).

Beaching it. You can book a safari cab for $10 to Pinney's Beach but it's actually a nice, 10-minute walk (if you're brisk); turn left at the tender pier and follow the coastline.

Scuba diving at Ft. Ashby; the settlement of Jamestown fell into the sea in the late 17th century -- thought to have been caused by an earthquake -- which lends to plenty of interesting underwater sightings. Visit scubanevis.com for more info.

Nevis Botanical Gardens (Montpelier Estate, daily from 10 a.m. until 6 p.m.). Lying in the shadow of the peak of Mt. Nevis, the eight-acre garden has lagoons, waterfalls, streams and a rain forest, among other natural diversions. There's a fun re-creation of a plantation house, Martha's in the Garden, which has indoor/outdoor dining with fabulous views (try to snag a table on the wrap-around porch); if the local lobster salad served in the shell is on the menu, order it! Martha's in the Garden also serves locally influenced dishes like curry chicken and lots of light fare choices -- salads and sandwiches. The restaurant is part of the Montpelier Plantation Inn, which operates one of the island's top restaurants; there's a great gift shop at Botanical Garden Nevis, too.

Horseback riding on Oaulie Beach; the Nevis Equestrian Center is just beyond the Oaulie Hotel.

Take a ride in a historic Victorian horse-drawn buggy at the Hermitage Plantation and Restaurant (St. John Fig Tree Parish, about 10 minutes from Charlestown). A ride costs $55 for a half-hour (two adults, two kids). The restaurant is open for lunch (noon until 2:30 p.m.) and welcomes visitors; try the flying fish, lobster and roti. The Oaulie Hotel also offers horse and buggy rides.