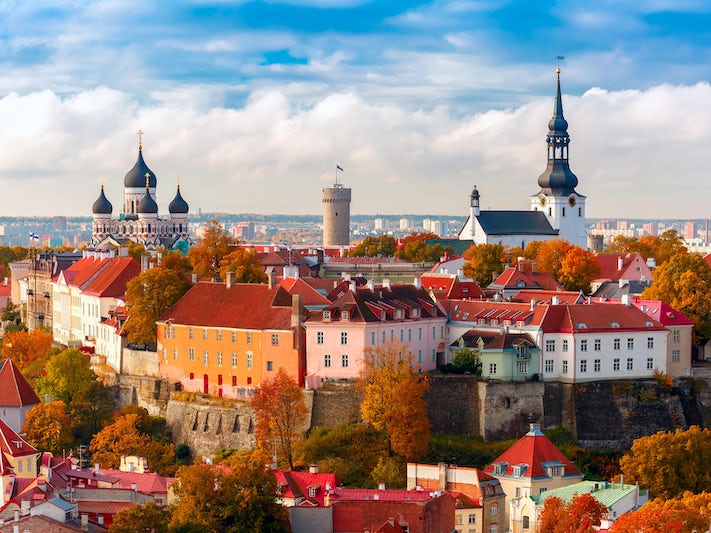 Find Things to Do in Tallinn on Viator

Popular Things to Do in Tallinn

Food and Drink in Tallinn

Best for a Quick Bite: There are lots of outdoor cafes that fit the bill, but on the ground floor of Town Hall -- now a concert hall -- is a neat little eatery that serves up freshly roasted coffee, beer, wine, cider, pastries, hot meat pies and, a local's favorite, elk soup. Open 8 a.m. to midnight daily.

Best for a Luxe Lunch: A popular locals' favorite for a special meal, Olde Hansa is a medieval restaurant offering up everything from bear, wild boar and elk sausage to a "sampler" featuring juniper flavored beef, orange tongue jelly, French royal poultry liver pate, onion jam, quail eggs and herb bread with nuts. Portions are served for those with "mild hunger" or "great hunger." There is outdoor and indoor seating. (Vana turg 1; open 11 a.m. to midnight daily)

Old Town is divided into the Upper Town, which was home to nobility, and the Lower Town, inhabited in the Middle Ages by merchants and artisans. Today, it represents one of the best-preserved medieval cities in the world. One of the main attractions is Toompea Castle (Toompea Hill), the seat of Estonian government since the 13th century. The castle, which has undergone a major rehab, is fronted by a distinctive pink parliament house built in 1773.

In a move to keep Russian culture dominant, Alexander Nevsky Cathedral (Palace Square; open 8 a.m. to 7 p.m. Monday through Friday, 8 a.m. to 8 p.m. Saturday) was built in the late 19th century in the style of Russia's 17th-century Orthodox churches. Toomkirik (also near Palace Square; open 9 a.m. to 4 p.m. daily) is the oldest church in Tallinn (it's believed to date to the 1200's or earlier) and boasts an unusual baroque altar and tombs. Kiek in de Kok -- "Peep into the Kitchen" in low German -- is the tallest cannon tower in Old Town and offers excellent views of kitchens and more. (Komandandi Tee 1; open 10 a.m. to 5:30 p.m. March 1 to October 31.)

Old Town's Town Hall Square is a central meeting place, as it has been since the gothic town hall was built in 1402. This is where the world's first Christmas tree stood in 1441. The square is lined with numerous cafes and winding streets, full of boutique-style shops that peel off from there. And the preservation is so perfect it's almost eerie -- yet incredibly beautiful. At the edge of Old Town near where the ship shuttle drops you off, check out the fragrant Flower Market. It's an excellent photo opportunity.

Kadriorg was built in the 1700's as a summer residence by Peter the Great for Tsarina Catherine. Kadriorg means "Valley of Catherine" in Estonian. It is now an art museum located in a gorgeous seaside park. Its main hall is one of the best examples of Baroque art in Northern Europe. It's about a 30-minute taxi ride from the pier.

The Estonian Open Air Museum lies on the peninsula of Rocca-al-Mare, a 25-minute taxi drive west of the city center. The park consists of a range of wood mills, houses and other structures dating to the 17th century. In the summer, folk troupes perform.

If you're interested in shopping, Viru Street has the city's best collection of pricey boutiques (capitalism was fast to catch on here once Communism fell), but you'll find smaller galleries and art shops on Luhike jalg, including the Viron Studio and Gallery L?hike Jalg. Estonian artists are particularly accomplished at textiles and glass. Antique shops like Best Antique Shop (Aia 10) have funky collections that include everything from Stalin busts to accordions. Livonia (Pikk 9) has a fabulous linen and wool collection, among other handcrafted items. (To its right with the pink facade is Everything's Store, a small grocery.)

Seaplane Harbour, a new maritime museum, is housed in the historical seaplane hangars built in 1916-17 as a defense structure for the Russian Empire. The hangars were the world's first thin-shell concrete domes of such volume. Exhibits include the Lembit sub from the 1930's, a century-old steam-powered icebreaker and the only existing life-sized copy of the Short 184 seaplane. There's also a cafe/restaurant with an Estonian/Nordic coastal-inspired menu. The museum is a 15-minute walk from the Fat Margaret cannon tower. It's also a stop on the hop-on, hop-off bus tour. (Vesilennuki 6; open 10 a.m. to 7 p.m. daily, closed Mondays, October to April)