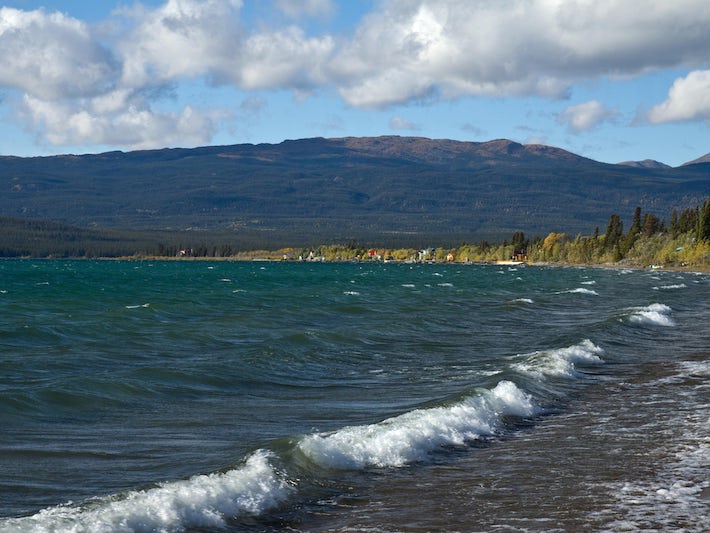 Find Things to Do in Whitehorse (Yukon) on Viator

Popular Things to Do in Whitehorse (Yukon)

Food and Drink in Whitehorse (Yukon)

Klondike Rib & Salmon: Klondike Rib & Salmon is housed in the two oldest operational buildings in Whitehorse, featuring kitschy decor and charming patio seating under a tented roof. As its name suggests, this seasonal joint is well known in Whitehorse for amazing ribs and fish. Frankly, you'd be hard-pressed to find better food anywhere. The menu includes items like halibut chowder, smoked salmon wraps, pulled wild boar sandwiches, burgers and, of course, ribs. There are also vegetarian-friendly options like veggie burgers and vegetarian delight wraps. We tried one of the restaurant's most popular offerings: halibut fish 'n' chips (with a maple barbecue salmon skewer on the side). Paired with a jar of sweet tea, it ranked in the top 10 meals we've had in our lifetime. Reservations are recommended. (Open daily from Mother's Day to September, 11 a.m. to 9 p.m.; 2116 Second Avenue; 867-667-7554)

Giorgio's Cuccina: This fancy Italian restaurant is ideal for romantic dinners or special occasions. It serves baked goat cheese, steamed mussels, calamari, garlic shrimp, crab and artichoke dip, a selection of pizzas and salads, and seafood pasta, as well as a variety of wines, among other items. We absolutely loved the crab and penne (ordered with white sauce). Reservations are recommended. (Open daily from 4:30 p.m.; 206 Jarvis Street; 867-668-4050)

Baked Cafe & Bakery: For your morning cup of joe, head straight to Baked for delicious coffee that will put the local Starbucks and Tim Horton's to shame. Hungry? Try one of several healthy breakfast items like a bagel sandwich, scone (white, whole wheat or spelt), or vegan muffin. If you're in the mood for pizza, quiche, soup or salad, you're in luck; those are offered, too, with several varieties available, including meat, vegan and vegetarian. (Open Monday to Friday, 7 a.m. to 7 p.m., Saturdays, 8 a.m. to 6 p.m. and Sundays, 9 a.m. to 5 p.m.; 100 Main Street; 867-633-6291)

Before setting off on your sightseeing adventures, be sure to stop by the Visitor Information Centre at 100 Hanson Street (open daily, May to September, 8 a.m. to 8 p.m.) to pick up your free Yukon Gold Explorer's Passport. Get your passport stamped at participating attractions, and you could win up to 2 ounces of gold.

Takhini Hot Springs: If you're looking to unwind, check out Takhini Hot Springs -- natural hot-water springs that feed into side-by-side pools that feature warm and hot water. In operation for more than 100 years, the pools' minerals will leave you feeling relaxed and your skin feeling smooth. Changing rooms and shower facilities are available. For those who don't want to get wet, the property also includes puzzle escape rooms, and plans are in the works for a spa and ice pool. Entry is $12 per adult. (Open 8 a.m. to 11 p.m. June to September, also open during the winter; located at mile 6/kilometer 10 at the end of Hot Springs Road; 867-456-8000)

Schwatka Lake: This manmade lake was created in 1958 when a portion of the Yukon River was dammed, thereby drowning the White Horse Rapids for which the city of Whitehorse is named. The reservoir is the city's main water source, and it also provides hydroelectric power. A visit will reward you with stunning views, relative peace and quiet, hiking trails and water that's the loveliest shade of blue-green you'll ever see.

Yukon Brewing: This tiny craft brewery is known for its Yukon Gold pale ale and bottles featuring artwork by local female artists. You'll only find its products in the Yukon and four of Canada's provinces, meaning it's something you likely can't get back home. What's also great about this brewery is that it reuses bottles and donates 100 percent of its tour proceeds to local charities. Tours are capped at 10 people and cost $10 per person. Reservations are recommended but are only taken over the phone 24 hours (or less) in advance. (Open daily, 11 a.m. to 6 p.m., tours Monday to Saturday at 2 p.m; 102 Copper Road; 867-668-4183)

Frantic Follies: This vaudeville revue, featuring the same types of slapstick comedy and cancan dancing that were popular during the gold rush, has been operating for about half a century. Local actors sing, dance and offer readings of works by Robert Service. (Box office open daily from 4 p.m. to 9 p.m., show at 8:30 p.m. daily; box office and theater located inside Westmark Whitehorse Hotel, corner of Second Avenue and Wood Street; 867-668-2042)

MacBride Museum of Yukon History: This museum, facing the Yukon River, is a wonderful way to learn about the Yukon's past. It features exhibits on Ice Age geography, gold, the territory's indigenous people, local fauna, the mounted police, and the history of energy generation in the Yukon. There are also interactive programs for children, and the 1900 Dominion Telegraph Office opens at select times each day to tell the history of telegraph communications and the area's first radio station. Guided and self-guided tours are available. Prices are $10 for adults, half price for children younger than 18 and $25 for families. (Open daily from mid-May to August, 9:30 a.m. to 5:30 p.m. ,Tuesday to Saturday from September to mid-May from 10 a.m. to 4 p.m.; 1124 Front Street; 867-667-2709)

Yukon Beringia Interpretive Centre: Highlighting the history of Beringia -- the land under the Bering Strait, which connected Asia and North America during the Ice Age -- this museum offers self-guided and guided tours from $6 per person. Inside, you'll find a replica of the largest woolly mammoth skeleton ever found, and you'll learn about Beringia's animal and human residents. A 17-minute educational film also runs on a loop. (Open daily from May to September from 9 a.m. to 6 p.m., Sundays and Mondays from October to April from noon to 5 p.m.; located at mile 886/kilometer 1423 on the Alaska Highway; 867-667-8855)