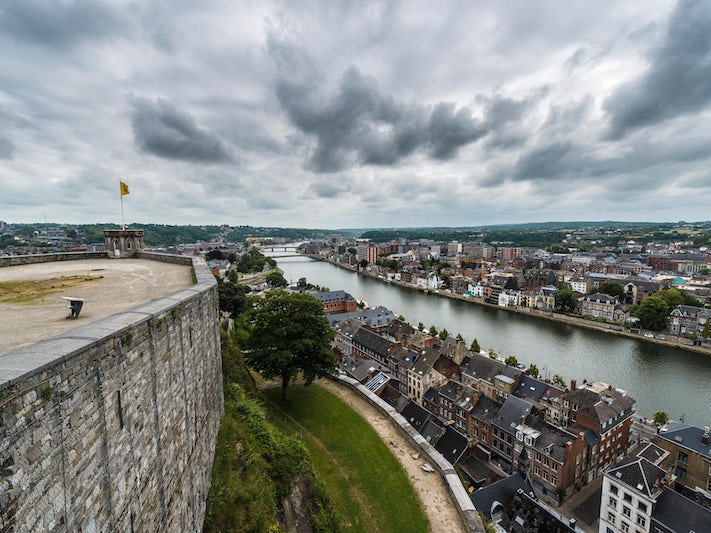 Find Things to Do in Namur on Viator

Popular Things to Do in Namur

Food and Drink in Namur

If it's not raining, any of the outdoor cafes around the bustling Place du Marche aux Legumes are good for a leisurely meal and people watching. (For more details, see above.) The city's proximity to the forested Ardennes means cured meats are a specialty here. Try the jambon d'Ardennes or pheasant a la Brabanconne. (The Brabanconne is also the name of the Belgium national anthem.) Note that many restaurants are closed on Sundays, which can sometimes present a challenge. Check ahead before visiting.

La Grignotte: Considered one of the best sandwich shops in the city, enjoy ingredients at reasonable prices. Arrive early for lunch as the small space fills up quickly. (Rue Saint-Loup 20, Namur; +3281-26-0686; hours vary. Cash only.)

Les Cup'inn: This popular tea room offers homemade baked treats including cupcakes, cookies and tarts. Stop here after your evening meal or perhaps for an afternoon break. The name sounds both like "Come in" and "Cup in," as if you're having a "cuppa," and is a play on words because in French, "Les Copines" means "girlfriends." (Rue des Fosses Fleuris 38, Namur; +3281-41-1013; open Monday to Saturday, 12 p.m. to 6 p.m.)

Namur is the final port -- or the first, depending on which direction you're sailing -- on Avalon's "Enchanting Belgium" cruise. Those looking to extend their trips should consider a night at Tanneurs de Namur. Just off the main square, this four-star hotel is a combination of 11 houses dating back to the 1600s. It has 32 rooms, each one unique. There are two restaurants on-site. Although it's not recommended for those with walking difficulties as the hallways are broken up by random steps -- the challenge of putting 11 houses together. (Rue des Tanneries 13, Namur. +32-81-24-0024.)

For those looking for a quieter stay farther from downtown, consider Ne5t Hotel & Spa. This complex of stone buildings near the Citadelle de Namur is incredibly luxurious, with six designer rooms, an on-site restaurant, pool and, of course, the spa. (Allee de Menton 26, Namur; +3281-58-8888)

This is Belgium, so beer is the way to go. Blanche de Namur is a witbier or "white beer," a Belgian-style ale that is unfiltered and made with a high level of wheat. It's brewed in the nearby village of Purnode and sold at most bars and restaurants.

City walking tour: At 2:30 p.m. on Mondays in May, June and September, the city's tourism office offers a reasonably priced English-speaking walking tour of the old city. It leaves from the tourism office on Hotel de Ville. It's open daily, 9:30 a.m. to 6 p.m. except December 25 and 26 and January 1 and 2. The office can also provide a city map.

Terra Nova Visitor Centre: This new facility offers a self-guided look at 2,000 years of European history from the viewpoint of the people of Namur. From there, guests may want to take a one-hour guided tour of the catacombs or check out an exhibit about how the Counts of Namur lived during the Middle Ages. Admission fees vary based on chosen activities. (Esplanade of the Citadel, Route Merveilleuse; +3281-65-4500; open daily, April 1 - September 30, 10 a.m. to 6 p.m.; open Tuesday through Sunday, October 1 - March 31, 10 a.m. to 5 p.m. The site is closed between December 26 and January 6.)

Church of St. John the Baptist: Also known as Eglise St. Jean Baptiste de Namur, this church, located in the old city's main square, is hard to miss. Its spire towers over the city, as it has done for more than 500 years. Duck inside to see the carved-wooden altar that was installed in the 1800s and shows the Virgin Mary taking the city of Namur under her protection. Once a year during the Fetes de Wallonie, Mass here is celebrated in the Walloon dialect. (Rue de College 17, Namur; Saturday Mass at 5:30 p.m., Sunday Masses at 8 a.m., 11 a.m. and 6:30 p.m.)

Church of St. Loup: This recently restored Baroque church, made from Meuse limestone in the 17th century, is tucked on a side street a few minutes walk from St. John the Baptist. The exterior, while grand, fades in comparison to the interior, with its carved wood and marble features. A visitor could lose hours staring at these carvings, picking out cherubs, animals and plants. Saint Loup, by the way, is Lupus of Troyes, an early bishop. The French religious leader is credited with saving his city from an invasion by Attila and his Huns in 451. According to legend, the future saint put on his full church regalia and led a line of clergy to meet meet Attilia outside the city. (Rue du College 5000, Namur; +3281-22-8085; visits upon request during weekdays.)

Royal Theatre of Namur: Built in the 1800s and completely renovated in 1998, this gorgeous building still hosts shows and concerts. But even if there isn't a performance on, it's worthwhile to ask about a private tour of this beautiful structure. Standing outside, look at the second level of this three-story building to see a statue of Comedy on one side and Music on the other. The spectacularly ornate interior features a domed ceiling painted in blues and gold, an enormous crystal chandelier and the heavy draperies of a lost era. That said, be assured the performances here are anything but old-fashioned as the 1998 renovation made accommodations for the most modern of stage enhancements. (Place du Theatre 2, Namur; +3281-22-6026 or +3270-22-8888; Box office hours are Monday to Saturday, 11 a.m. to 6 p.m.)

Museum of Ancient Namur Arts: This museum's galleries, housed in an 18th-century mansion, showcase artworks from the Middle Ages through to the Renaissance period. In addition to the standard fare of paintings and sculptures, the museum also has an extensive collection of silverware, pottery and dishware as well as pieces designed by goldsmith Hugo d'Oignies and his apprentices in the early 1200s. (Rue de Fer 24, Namur; +3281-77-6754; closed Mondays and on a handful of days during the winter holiday season; open from 10 a.m. to 6 p.m. all other days.)

Stilt Walkers of Namur: Since 1411, two teams of Stilt Walkers, distinguished by the color of the stripes on the stilts, have fought in city squares with the last walker standing representing the winning team. The stilts are about 80 feet tall with the walker's foot taking hold at almost 3 feet up in the air. After a recent joust, the walkers helped tourists climb atop the stilts -- and it's a lot more difficult than it looks. The Stilt Walkers of Namur perform at different times, so visit their website to find performance information.