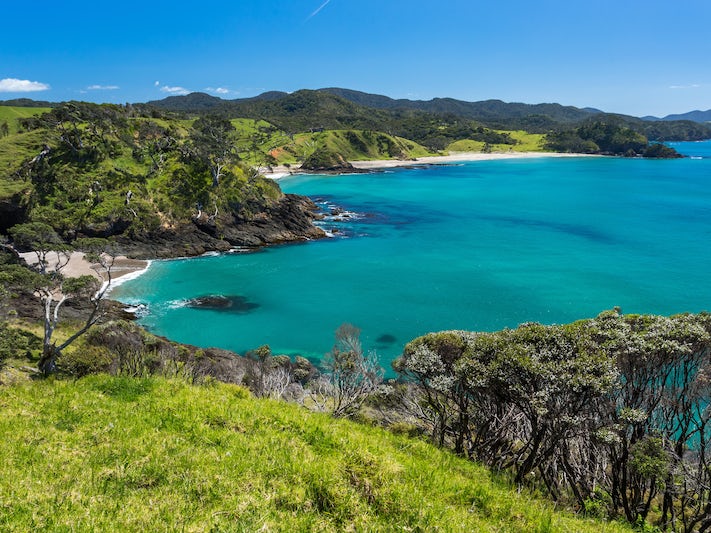 Find Things to Do in Bay of Islands on Viator

Popular Things to Do in Bay of Islands

Food and Drink in Bay of Islands

Dining in New Zealand is wonderful. Not only is the produce fresh and abundant, and the wine of the highest quality, but the chefs are switched on and inventive. Local cafes and restaurants offer mostly western-style dishes, however some pre-booked tours will include the experience of a traditional Maori hangi. ( A meal of meat and vegetables cooked underground on heated rocks).

If you see the local Orongo Bay oysters on a menu in season, do try them as they are superb. There are several oyster farmers in the area. Try them at The Old Packhouse Market in Kerikeri on Sunday morning, where you can also sample the mussel fritters, which may turn up at some cafe or restaurant menus around the place. (505 Kerikeri Road; open Saturdays 8 a.m. to 1.30 p.m.; Sundays 9 a.m. to 1.30 p.m.)

Russell: There is a range of dining options along the main waterfront street, The Strand, ranging from cafes and fish and chip shops to the stylish Duke of Marlborough Hotel, established in 1827, near the ferry wharf. There is a roaring fire inside if the weather is chilly. On warmer days, the sunny terrace overlooking the bay is ideal. (35 The Strand, Russell, 09-403-7829; open daily, 7 a.m. to 9 p.m.)

Paihia: 35 Degrees South Restaurant stands out at the jetty thanks to its circular shape and long dining deck. Those who dine here remark on both the unbelievably fresh seafood and the stupendous views. (69 Marsden Road; 09 402-6220; open daily, 8 a.m. to midnight.)

Waitangi: Copthorne Hotel and Resort is located adjacent to where the tenders come in at the wharf. You can expect to find local oysters and seafood on the menu as well as locally sourced fresh produce on both a la carte and buffet options. The restaurant has views across the pool to the bay. (1 Tau Henare Drive; Waitangi; 09-402-7411; open daily, for breakfast and dinner.)

Kerikeri: The word is that Marsden Estate restaurant and winery is the best in the Far North. If you want to try several dishes, the shared plates will work well for you. Expect to see unfamiliar ingredients as the chef loves to show off the local produce. (56 Wiroa Road; 09 407-9398; open daily 10 a.m. to 4 p.m.)

Beaches in Bay of Islands

Ask a local which beach is best and they may have trouble deciding. It depends what you want to do, after all. Kayaking, parasailing, swimming with dolphins, scuba diving; it's all possible in the area, and you can hire both craft and gear.

Many people opt for Whangaroa ( 'wh' at the start of a Maori place name is pronounced as 'f') and there are plenty of fishing charters from there. If time is limited, take a harbour cruise, or go snorkelling or sea kayaking.

Don't Miss in Bay of Islands

Bay of lslands cruise: Whether you take a half- or full-day cruise, this is the best way to see the stunning scenery of the bay. Tours depart from Waitangi Wharf, where you will get up close to these natural wonders, including the famous Hole in the Rock. On a good day, your boat might even go through it! As well as the breathtaking scenery, there is an abundance of wildlife, including birds, dolphins and even seals.

Waitangi Treaty Grounds: Learn more about the history of the area by exploring the Museum of Waitangi. Entry into the museum includes a guided tour, a cultural performance, and full access to the expansive grounds of New Zealand's most important historic site.

Waitangi Treaty House: Waitangi Treaty House is of great historical importance as it was here that the treaty between the Maori Chiefs and the British Crown was signed in 1840 to establish the British colony of New Zealand. Regarded as 'The Birthplace of the Nation', the building is located in beautifully landscaped grounds. There is a fully carved Maori meeting house, one of New Zealand's largest Maori war canoes, a visitor centre and art gallery.

Russell: This delightful waterfront town has shrugged off its 19th-century boisterous past and is now filled with great galleries, places to dine, stroll and shop.

Christ Church: Built in 1836, Christ Church is New Zealand's oldest church. Download the Hikoi Tahi Walking Tours app, which guides visitors through the gravestones and tells the stories of some of the interesting people buried here. Services are held every Sunday at 10.30 a.m.

Omata Estate: This vineyard located five minutes from Russell is managed by Bruce Soland, a former professional golfer and entertaining raconteur. Offering sweeping views over the bay, tasting platters and wine tastings, the merlot and pinot gris are well worth trying. 212 Aucks Road, Russell; 09-403-8007. Wine sales are offered 11 a.m. to 5 p.m., seven days a week, all year. Restaurant and wine tastings are on offer from Labour Day Weekend to Easter (inclusive) seven days per week, 10 a.m. to 5 p.m.

Paihia: Known as the 'Jewel of the Bay of Islands', Paihia is a good starting point for most visitors. It's a bustling place with arts and crafts and souvenir shops (see below), three beaches, cafes and restaurants. Today, the main industry in the town settled by missionaries is tourism. This is the best place to depart for tours of the bay or diving, snorkelling or sea kayaking expeditions. Lucky you if your cruise brings you here on a Thursday when the weekly farmers' market operates and you might even taste some of New Zealand's multi award-winning limoncello, Sovrano.

Haruru Falls: This spectacular horseshoe-shaped waterfall is located about 3 km inland from Paihia. Maori legend has it that a water monster lives there. Once New Zealand's first river port, there is now a track between the Treaty Grounds, leaving from the opposite side of the road. The track offers walkers a sheltered path along the banks of the Waitangi river to the falls. Allow 2.5 hours one way. Return the same way unless you have organised a shuttle to pick you up.

Kerikeri Mission Station: New Zealand's oldest European stone building, built between 1832 and 1835, is located on the Kerikeri basin, a 30-minute drive north of Paihia. Kerikeri Mission Station is home to the iconic Stone Store, which serves as a general store and contains a small museum on the top floor. (246 Kerikeri Road; 09-407-9236; open daily, November to April, 10 a.m. to 5 p.m.; open daily, May to October, 10 a.m. to 4 p.m.) Free guided tours of the Stone Store Shop includes entry to Kemp House and the Stone Store Museum; tours are conducted at 10.30 a.m., 11.30 a.m. and 2.15 p.m.) A fee is incurred for adults and unaccompanied children (up to 18 years), while accompanied children are free. All visitors are welcome to browse in the Stone Store Shop (ground floor) for free.

Kemp House: The oldest surviving European building in New Zealand, Kemp House, was built between 1821 and 1822. Originally a mission house superintended by Rev. John Butler, the house became the home of James Kemp and his family in 1832. Descendants of the Kemps retained the home until 1974, when it was gifted to the nation. Entry to Kemp House is by guided tour only. Open daily from November to April, 10 a.m. to 5 p.m.; May to October, 10 a.m. to 4 p.m. There is no wheelchair access to either the Stone Store or Kemp House.

Rainbow Falls: This 27m-high waterfall can be reached via a walking track from Waipapa Road, which will take you about 10 minutes. Just so you know, in New Zealand, hiking is called tramping, and you can do this on the 4km-long Kerikeri River track, which also leads to the falls via the Fairy Pools.

Puketi Kauri Forest: This tranquil forest is a wildlife refuge and wonderful place to walk and spend a few hours.