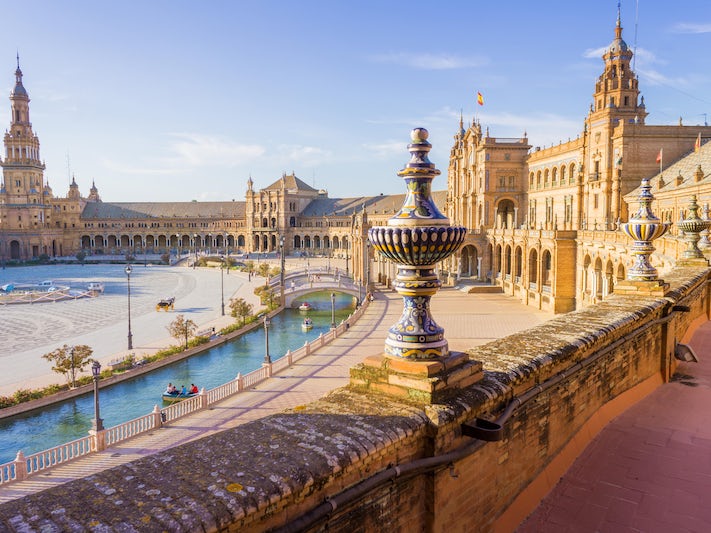 Find Things to Do in Seville on Viator

Popular Things to Do in Seville

Food and Drink in Seville

Seville is THE place to enjoy tapas and the locals love nothing more than to spend an evening drifting from bar to bar, often standing at tall tables to enjoy a conversation over tapas washed down with beer, wine or sherry. Follow their example --and your instincts -- and simply stroll around the old town to find a tapas bar that takes your fancy.

A small plate of tapas typically costs between E2 and E4; if you're hungry (or like that particular food so much you want plenty of it, ask for a media racion (a medium portion) or a racion (a full plateful).

Recommended places for tapas include Casablanca tapas bar, on the river side of the cathedral (Tel: 954 22 4114 / www.bodeguitacasablanca.com ). It's open 7 a.m. to 5 p.m. and from 8 p.m. until 12:30 a.m (closed Sundays). Specialities include whisky tortilla, marinated monkfish, `fried milk' (a Spanish delicacy made from whey) and chestnut pudding.

Bodeguita Romero (Haring 10, Seville; 954 229556; www.bodeguita-romero.com ) also has a good reputation. It's open noon until 5 p.m. and from 8 p.m. to midnight (not Sundays); oysters are a house speciality and tapas costs from 2 euro per dish.

For traditional Andalucian cooking; Restaurante Modesto (Cano y Cueto, 5; Tel: 954 416 811/www.modestorestaurantes.com) is a good bet, as it has a lively bar and a rather fabulous dining room, its walls half tiled and half embellished with traditional Spanish artwork. There is also an outside terrace. Specialities include roast shin of lamb and fine Clams Villalua Marquis (prawns served with wild mushrooms), while Pastel Lemon Meringue (cake made with thin layers of sponge cake, lemon cream and meringue flambeed) is a pudding to write home about.

For a splashout stylish lunch: Taberna del Alabardero (The Beefeater Tavern) at Zaragoza 20 (Tel +34 954 50 27 21/www.tabernadelalabardero.es) is set in a grand and very elegant mansion. Lovers of puddings will be in their element here; options include Frozen Custard with Hazelnut Toffee, Italian and Citrus Brioche, French toast with Cinnamon Ice Cream. (Open weekdays 1:30 p.m. to 4:30 p.m. and 8:30 p.m. to midnight; closed Sundays)

Gaping in awe at the fabulous mosaics and general gorgeousness of the Alcazar, a grand 14th Century Moorish palace which -- although built a century after Moorish rule ended -- gives Granada's Alhambra a run for its money (and has fewer crowds and - arguably-- even lovelier gardens). It is the home of Spain's Royal Family when they are in Seville, and open to lesser mortals from 9:30 a.m. to 5 p.m. daily.

Taking in the grandeur of Seville's splendid Gothic 15th century cathedral, the world's third largest church after St. Peter's in Rome and St. Paul's in London. It is near the Alcazar and has a Moorish aspect, as it incorporates some elements -- including a courtyard filled with orange trees -- from the 9th century mosque which formerly occupied the site. Of particular note is the cathedral's massive wooden altar, hand-carved over the lifetime of one craftsman with 45 scenes from the life of Christ. (Opening hours are complex and vary by season; check current hours before you go.

Puffing your way to the top of the 14th century Giralda (the Cathedral's bell tower) which is a World Heritage Site and rewards the energetic with magnificent views across the city.

Strolling around Barrio de Santa Cruz, the city's exquisite Jewish quarter that dates from the 17th century and is a heavenly mix of historic whitewashed houses, intriguing cobbled alleyways and beautiful plazas. It's a lovely place to spend a lazy morning or afternoon, as you'll find plenty of good cafes and well-stocked antique shops. The glorious mansions along Caledon del Agua are also worth a look.

Visiting one of Seville's key museums. These include the Muse Arqueologico on Plaza de America, which opens (June to September) from 10 a.m. to 3:30 p.m., Tuesday to Saturday, and from 10 a.m. to 7 p.m. on Sundays. (Closed Mondays.) Entrance is free to people from EU countries, E1.50 to others.

Savoring the art of the Spanish grand masters -- including El Greco and Velazquez -- at the Museo de Bellas Artes, which is housed in a 17th century convent building in Plaza del Museo. It's open (in summer) from Tuesday to Sunday, 10 a.m. to 5 p.m. (Closed Mondays. Same fee as the archaeological museum.)

Go barefoot in the park. Maria Luisa Park is the city's largest and rated one of the loveliest parks in Europe. Filled with waving palm trees, fragrant pines and orange groves, it's a delight to explore its pavilions and secret bowers. It has the grandiose Moorish style Plaza de Espana -- which was built for the 1929 Expo -- at its heart, and from here -- for around E36 -- you can hire a horse and buggy ride for an hour-long ride around the park (there is room for four adults on board, so cut costs by booking with friends).

Explore nearby Cadiz (even easier if your ship has stopped there). Almost as charming as Seville, Cadiz is one of Europe's oldest cities and its narrow winding streets are filled with excellent food, wine and craft shops. It also has a beautiful 18th century Baroque cathedral and a well-stocked Fine Arts and Archaeology Museum.

Rent a car if you have time and head along Spain's Atlantic coast to the lovely beaches of Costa de la Luz, which are famed for their soft sands, rich wildlife and great bird and whale watching. (You can hunt down the best deals in advance at comparison sites like www.travelsupermarket.com or www.doyouSpain.com. If your visit is too brief, book an excursion to nearby Jerez, where you can discover the joys of Spanish sherry without the worry of having to drive back