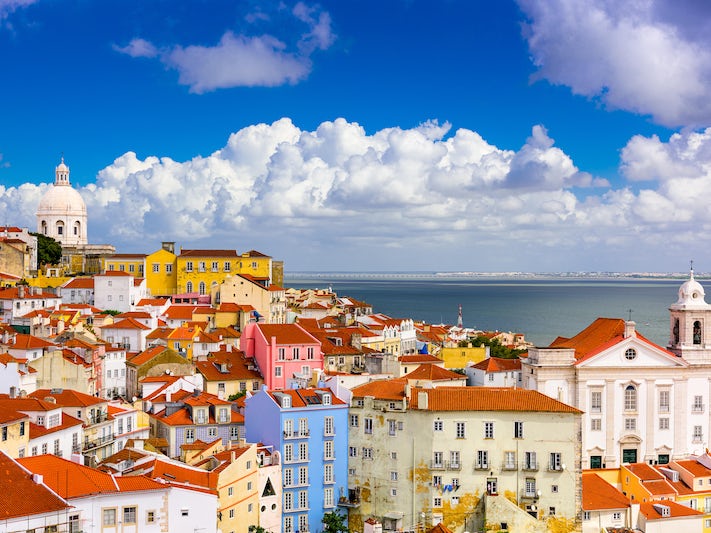 Popular Things to Do in Lisbon

Long overlooked by Americans in favor of other European hot spots, Lisbon is finally getting a rightful shine from the tourism spotlight as a striking city boasting a rich culture and long sea-faring history. Home to over half a million people, Portugal's Lisbon brims with things to do like the Museum of Art, Architecture and Technology; historic castles and churches like the Gothic-era Lisbon Cathedral, which is the oldest in the city; and a vibrant waterfront. To ensure plenty of time to explore, cruise passengers should consider a shore excursion that features a walking tour -- Lisbon is a city best seen on foot. If it's the beach you're after, try an excursion out to one of the nearby resort towns like Estoril or Sintra (depending on your time in port). Religious travelers might also be interested in a pilgrimage to Fatima. Portuguese cuisine, particularly the seafood, cheese and wine, should not be missed.

Like in much of Europe, the busiest season for tourism in Lisbon is summer, but the spring months also offer wonderful weather for sightseeing. Portuguese is the official language in Lisbon, though English is commonly understood if not spoken. Official currency is the euro.

Find Things to Do in Lisbon on Viator

Food and Drink in Lisbon

Portuguese cuisine features lots of fish, soft-shell crabs and meat and rice dishes. When you sit down, the server may put bread, butter, one or two kinds of cheese and an hors d'oeuvre on your table. You will be charged for each one, so politely say no thank you for what you don't want, and it will be taken away.

Lisbon's most interesting restaurants are located in the hilly Bairro Alto neighborhood, adjacent to and above Baixa. The restaurants are intimate, indoors (no room for sidewalk cafes) and full of charm -- usually with a bar to one side for the locals and table seating on the other. On Rua das Portas de Santo Antao, just north of the Rossio, numerous sidewalk cafes beckon. A few outdoor/indoor restaurants are located to the left as you exit the Alcantara Terminal. Pick one where you see lots of people, preferably locals. If you're docked at the Santa Apolonia terminal, head to the Alfama district just above. The best restaurants there are often the ones without touts outside soliciting business.

For local cuisine, Cocheira Alentejana, sporting a peasant-style decor, is full most nights. Specialty of the house is dogfish soup and migas with pork (Travessa do Poco de Cidade, 19; 213 464 868; open noon to 2 a.mMonday to Friday, 7:30 p.m. to 2 a.m. Saturday; closed Sunday)

Tagide, a funky tapas bar, offers two lunch options: one course for 8.50 euros or three for 12.50 euros, including a glass of wine and coffee. If you prefer to order separately, try the clams in white wine and garlic or roasted peppers and cheese. Leave room for custard tarts served with cinnamon ice cream. (Largo da Academia Nacional de Belas Artes 18 and 20, Chiado; 213 404 010; open 12:30 p.m. to 3 p.m. and 8 p.m. to midnight Tuesday to Sunday)

Alfama, the ancient Moorish quarter, is the oldest in Lisbon -- though some of it had to be rebuilt in the 18th century, following the devastating earthquake in 1755. It's fun for its cafes, little shops and labyrinthine streets. Note: The Alfama neighborhood is especially convenient if your ship docks at Santa Apolonia, but it also requires a steep climb along very narrow sidewalks and twisting cobbled streets.

The main event there is the 10-towered Castelo de Sao Jorge, or Castle of St. George. Built in the 10th century, then expanded into a royal palace from the 13th to 16th centuries, it's one of the few structures that survived the quake. The views down to the Baixa district, across to the Bairro Alto and out along the Tagus River are splendid. Geese and ducks roam around the castle gardens, which are surrounded by native trees. Be sure to visit the relatively new museum that displays the artifacts collected on the site, from the Romans to the Moors. (Open 9 a.m. to 9 p.m. from March - October and 9 a.m. to 6 p.m. from November - February)

Directly above Santa Apolonia sits Igreja de Santa Engracia e Panteao Nacional, a whitish Baroque marble church with pink and brown marble interiors, built over almost 300 years (1681 to 1966). Since the beginning of the 20th century, many rulers and national heroes have been buried there. Entry is free, but you can pay a small fee to climb 181 shallow steps to the inside of the great dome and onto the roof for a 360-degree view. (Campo de Santa Clara; open 10 a.m. to 5 p.m. Tuesday to Sunday)

Also, check out Lisbon Cathedral which dates to the 12th century. The interior features are more impressive than the exterior because the structure was rebuilt after the earthquake. (Largo de Se; open 10 a.m. to 7 pm. daily)

The Baixa and Rossio districts are the central shopping and tourist areas. Several attractive parallel streets run between Rossio Square and Praca do Commercio, and it's worth picking ones with little car traffic for a peaceful roundtrip on foot. Some of the older storefronts are simply beautiful, with art nouveau facades. Most small shops take long siestas, so do your shopping before the 1 p.m. to 3 p.m. lunch break if your ship departs in the late afternoon. On nice days, cafes set up tables in the center of the traffic-free Rua Augusta, which is a better place for a drink than a meal.

Calouste Gulbenkian Museum houses the art collection of this Armenian oil industry tycoon. He moved from Paris to Lisbon in 1942 during WWII and died there in 1955. His foundation created this outstanding museum in 1969, located in a lovely park just outside the center but easily reached by metro. The collection is almost encyclopedic, including Egyptian, Greco-Roman, Mesopotamian, Far Eastern, Asian and European art and sculpture, as well as fabulous carpets, extraordinary silverware and an outstanding collection of Rene Lalique jewelry. Black and white photos show some items in his original Paris home, but there is no crowding of objects -- just lots of space for showcasing the art and artifacts. (Avenida de Berna, 45A, metro stop is Sao Sebastiao or Praca de Espanha; open 10 a.m. to 6 p.m. Wednesday to Sunday)

Tram 28 might just provide the most popular ride of its type in all of Europe. The ancient, tiny cars begin the run near the Castelo de Sao Jorge and twist and turn down into the Baixa district, then up again into the narrow streets of Bairro Alto. The journey ends at Praca da Estrela (30 minutes) or Parada dos Prazeres (45 minutes). As some streets are so narrow, steep and curvy, no bus could possibly replace the trams. They're often crowded and targeted by pickpockets, so stay alert. If you see two trams coming along together and the first one looks full, let it go by, and you'll have a better chance of getting a seat. Pay onboard, or use your day pass to hop on and off.

The Bairro Alto is a rabbit warren of cobbled, winding alleyways with beautiful tiled houses and small squares. It's a great location for a peaceful wander during the day. (It gets livelier at night.) The hilly neighborhood is home to some of Lisbon's more intriguing restaurants. (See Lunching below.) To get there, take Tram 28 or, to avoid the steep climb, use the Elevador de Santa Justa at the end of the street of the same name. Opened in 1902, it runs from 7 a.m. to 11 p.m. in the summer and 7 a.m. to 9 p.m. in the winter. It often has long lines in the warmer months.

Located five miles along the Tagus River, west of Lisbon's city center (and two miles west of the Alcantara cruise ship terminal), Belem (which means Bethlehem in Portuguese) offers lots of space, excellent museums and plenty of snacking and dining options. The well-defined cultural district is set around elegant parks and along the Tagus River waterfront. To get to Belem, take Tram 15 from Figueira Square or Comercio Square. Or take a taxi from Praca do Comercio or from Alcantara if your ship is berthed there. You can also have a nice walk to Belem along the riverfront. The 45-minute walk features many points of interest along the way. For snacking, head for Rua de Belem, which has plenty of cafes and pastelarias (bakeries).

Belem is anchored by its dramatic 16th-century tower. The Torre de Belem was built in the powerful Manueline architectural style, employing elaborate carvings with religious, natural, royal and maritime themes. Also on the riverfront stand, the Padrao dos Descobrimentos (Discoveries Monument) marks 500 years since the death of Henry the Navigator, Portugal's great 15th-century explorer. The monument depicts a caravel -- an early sailing ship that could maneuver in all wind conditions, allowing some of the first world explorations by sea -- and other important navigators, such as Vasco da Gama.

Belem's cultural highlights include the 16th-century Mosteiro dos Jeronimos (Monastery of St. Jerome), built by Dom Manuel I in his Manueline style. It features elaborate carvings, cloisters, a church with three naves and the tomb of Vaso da Gama. Ascend to the choir level to view the church from on high. (Open 10 a.m. to 6 p.m. Tuesday to Sunday.) The Museu Nacional de Arqueologia (Archeological Museum) features a range of antiquities, coins, jewelry and Roman mosaics. (Open 10 a.m. to 6 p.m. Tuesday to Sunday.) The Museu da Marinha (Maritime Museum) focuses on Portugal's Golden Age of Discoveries, with models of merchant, naval, sailing and fishing ships and royal yachts. (Open 10 a.m. to 5 p.m. Tuesday to Sunday.) All three are located in one continuous line along the Praca do Imperio. The Centro Cultural de Belem across the street exhibits contemporary forms of art, music and theater in a modern stone building. (Open 8 a.m. to 8 p.m. Monday to Friday, 10 a.m. to 6 p.m. Saturday.)

Gorgeous, lush and green, Sintra is another city worth a visit. Its main attraction is an elaborate Moorish Castle, but it's also famous as Portugal's only city with three palaces and a castle within town limits. You can visit the Palacio Nacional da Pena, an eclectic fantasy built in the 19th century with Moorish, Gothic features and bright colors. It once served as royalty's summer home. (Open 9:30 a.m. to 7 p.m. daily)

At the Castle of the Moors, built around the ninth century, walk the ramparts for views of the surroundings palaces. Also, explore the cobbled town center, with its sidewalk cafes and shops. Trains operate every 15 minutes from Rossio Station, located at the northwest corner of Rossio Square in downtown Lisbon. Plan on a 40-minute trip each way. (Open 9:30 p.m. to 8 p.m. daily in summer and 10 a.m. to 6 p.m. in winter)

The turn-of-the-last century resort town of Estoril, located just to the west of Lisbon, is easily reached by frequent trains from Cais do Sodre station. Roman ruins are found there, but the big attraction is the Estoril Casino -- likely the inspiration for Ian Fleming's James Bond novel "Casino Royale."

Fatima is an important Roman Catholic pilgrimage site, located 88 miles north of Lisbon. In May 1917, three Portuguese children reportedly saw the Virgin Mary, who instructed them to pray. Since that time, devout Catholics and other interested travelers have gone to the site to see the huge neoclassical Our Lady of Fatima Basilica and the Chapel of Apparitions, built on the ground where the children said they saw the Virgin Mary standing.