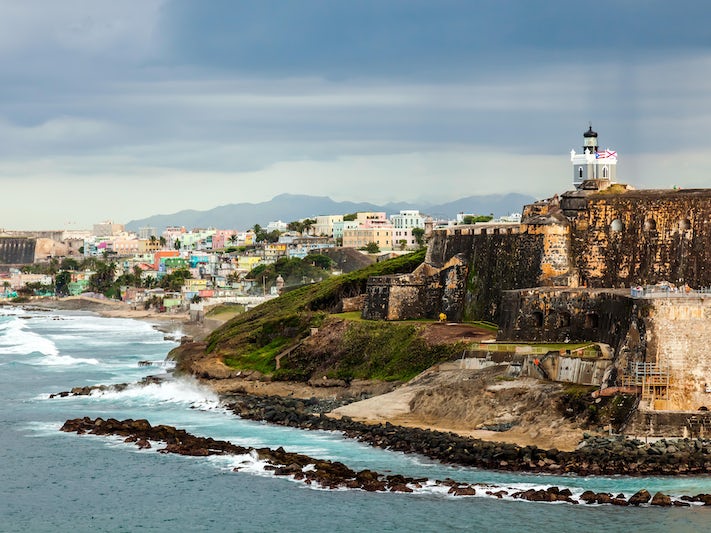 Popular Things to Do in San Juan

The capital city of Puerto Rico is a destination full of history and rich culture, and thanks to the compact nature of the island, San Juan is a great base for exploring its major sights. The cruise port is located in gorgeous Old San Juan, where visitors won't have to wander far to experience the best the city has to offer. From excursions to museums and art galleries celebrating its indigenous people to the historic El Morro fort, it's possible to get a feel for Puerto Rican culture even on a short visit -- and no matter where you end up, the beach is not far. Be sure to stop for some authentic mofongo, a savory mashed plantain dish, and a refreshing piragua, or Puerto Rican snow cone.

For a more Americanized vibe, venture to the newer part of the city -- particularly the Condado neighborhood -- where you'll find many contemporary restaurants, bars and shops. Shore excursions to the nearby El Yunque National Forest or Casa Bacardi are other great options.

Puerto Rico is very hot and humid and rainstorms aren't uncommon, especially during the summer months. The island is a U.S. territory so currency is the U.S. dollar, and while Spanish is the primary language, English is widely understood even if not spoken.

Find Things to Do in San Juan on Viator

Food and Drink in San Juan

Bagua is a local favorite in Condado, offering a creative menu of Puerto Rican dishes such as plantain-crusted mahi mahi. Past diners rave about the sangria and the ceviche.

A good spot for a light, healthy lunch or dinner is St. Germain Bistro & Cafe, where you can choose from a selection of sandwiches and salads -- like the Arabian (pesto chicken, grape tomato and hummus on pita bread) or the Ginny (mixed greens, shrimp, carrot, tomato and parmesan cheese with a ginger vinaigrette). Also on the menu are quiche and crepes.

The Parrot Club (363 Fortaleza) is the restaurant that inspired San Juan's gourmet revolution, and while it's a bit more passe these days, it's one of the few in the trendy SoFo (south of Fortaleza restaurant district) to open for lunch. It's known for its Nuevo Latino cuisine.

Because many ships spend evenings in San Juan and don't depart until late-night, cruisers should also consider dinner options. Head to the aforementioned SoFo, where the hip restaurants of the moment include Marmalade (317 Fortaleza), which offers a U.S.-inspired menu. (For a great thirst quencher, try the signature drink at the hip Marmalade restaurant; the M317 martini consists of Cointreau jelly, limoncello, triple sec, Campari and grapefruit espuma -- a whipped cream without eggs.)

Don't miss out on a pina colada from Barrachina (104 Calle Fortaleza), its supposed birthplace. For something a bit more modern, order a house favorite, the lavender mule, at trendy La Factoria on Calle San Sebastian.

Medalla Light is the local beer, and while Bacardi is the better-known rum produced in Puerto Rico, the locals prefer Don Q -- an equally (if not more) venerable brand.

Best Beach for a Half-Day Visit: The beaches that run in front of Isla Verde's luxury hotels (about a 20-minute cab ride) are the best for short visits; ask the cabbie to drop you off at the Ritz-Carlton or the El San Juan.

Best Secluded Beach: The aforementioned Bahia Beach is great for those looking for some peace and quiet. Pena, located in front of El Capitolio (the capitol building), is a local gem in more ways than one: it's super close to the city and offers a delightful array of seaglass.

El Morro: Check out the historic sites of Old San Juan, including on of its most famous forts, whose original parts were completed in 1539 (and which successfully deterred would-be colonial powers from capturing the island). Tours are from 11 a.m. to 3 p.m., with an entry fee for adults, though the fee also covers the cost of San Cristobal Fort.

San Cristobal Fort: Also in Old San Juan is a second fort, which was built in 1771. On weekends, the grounds of both forts are thick with locals flying kites. (Tours from 10 a.m. to 2 p.m.)

Museo Pablo Casals: Fans of the Spanish cellist Pablo Casals should check out the museum dedicated to the musician, where the Spanish master's collection includes manuscripts, photographs and a library of video tapes of Festival Casals concerts (played on request). (Plaza San Jose, Tuesday through Saturday from 9:30 a.m. to 4:45 p.m.)

Bacardi Rum Factory: This is commonly offered as a ship-sponsored tour, but it's easy to go on your own, too; take the ferry (which leaves from Pier 2, right next to the cruise ship dock, every half hour and costs $1, roundtrip, for the six-minute ride) to Catano, and then catch a bus or ferry for the 10-minute ride to the factory. (Don't walk -- it's long and hot.) The factory itself is lovely. There are gorgeously landscaped grounds (lots of hibiscus), an open-air pavilion for Bacardi-influenced drinks, a gift shop and a tour that can lead into your very own mixology course if you upgrade your ticket.

El Yunque: It's hard to visit San Juan and not be drawn to El Yunque, the only rainforest designated as a U.S. National Forest. Located about an hour south of San Juan, you'll see numerous waterfalls, ferns and wildflowers along the marked trails. Because it's a rainforest, it will probably, well, rain during your visit -- so pack a slicker.

The Beach: While Old San Juan doesn't really boast any of its own, the beaches in the nearby areas of Condado and Isla Verde stretch along high-rise hotels and are a 5- to 10-minute taxi ride (longer during rush hour) from the cruise pier.

For Golfers: Bahia Beach is a hidden treasure; a car rental is required to get to this out-of-the-way, 18-hole public course that sits at the base of El Yunque and fronts the sea with a gorgeous beach, framed by palms and palmettos. Being totally public, it's also open to non-golf-playing visitors (though the club does request that you politely ask permission). Golf clubs are available for rent.