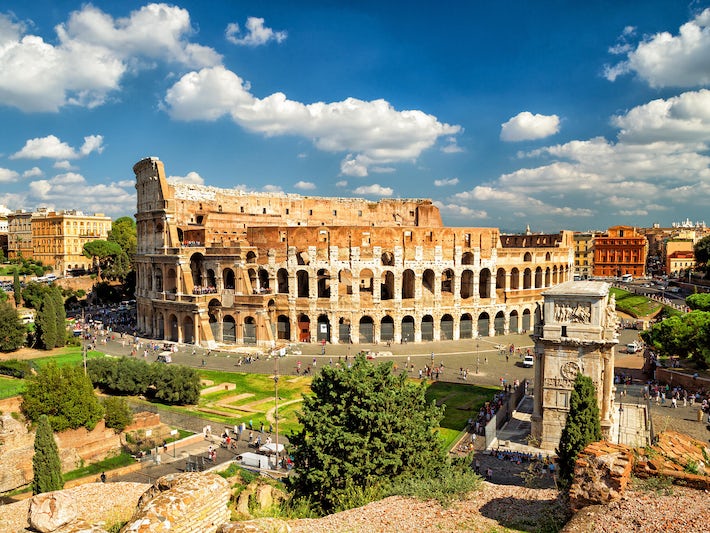 Popular Things to Do in Rome (Civitavecchia)

Rome is a crossroads of a city, marrying its ancient roots with its status as a thoroughly modern metropolis. There is so much to see and do that it would be impossible to cover it all in a single day's visit, so choosing shore excursions based on your own personal interests is a must. (And if you can, tack on a pre- or post-cruise stay.)

If architecture is your thing, go see the Colosseum and the Pantheon; if it's art you're after, stroll the route between Vatican City and St. Peter's Basilica; or skip dedicated visits to all of the hot spots and instead shop to your heart's content and indulge in as much pasta and gelato as you can handle on a foodie-themed cruise tour. (Keep in mind that if your port stop is Monday, you'll find that many museums and attractions are closed.)

Peak travel season in Rome is during the summer, when it can become unbearably hot. The spring and fall months are much less crowded and the temperatures are much more pleasant. The official language in Rome is Italian and the currency is the euro.

Find Things to Do in Rome (Civitavecchia) on Viator

Food and Drink in Rome (Civitavecchia)

A meal at an outdoor cafe is a must-do Roman experience. Although Piazza Navona can get a bit crowded, that's part of the fun. The bustling piazza is filled with cafes offering alfresco dining and chairs facing out for the best people-watching, while musicians stroll and provide ambience. One cafe to try is Tre Scalini, the oldest restaurant on the piazza, with its umbrella-covered, red-clothed tables and traditional Italian pastas, pizzas and steaks.

Near Vatican City, en route to Castel Sant'Angelo along the river, a host of restaurants is located along Borgo Pio, but, instead, duck down one of the side streets for less crowded and less tourist-filled small restaurants with better prices and better food.

In Vatican City, St. Peter's Basilica (Piazza San Pietro; open daily, 7 a.m. to 7 p.m.), the earthly locus of the Roman Catholic Church, and the extensive Vatican Museums (where you'll find the Sistine Chapel) are grouped together just across the Tiber River from central Rome. Visitors to St. Peter's and the Vatican Museums (open Monday to Saturday, 9 a.m. to 6 p.m.) have to clear a security checkpoint. The line for St. Peter's begins in the Piazza, while the entrance and line to the Vatican Museums is around the corner (to the left, on Viale Vaticano). Expect to wait in line for hours if you want to visit the Vatican Museums on your own. (One advantage to booking a cruise line tour is you might not have to wait quite that long.) Plan ahead, and book your tickets (timed entry) online to skip the lines; you'll only need to pass through security. It's easier to bypass lines if you enter through the museums, which lets you out in front of St. Peter's, where you may enter without further lines. However, there can be lines if you'd like to climb to the top of St. Peter's Basilica (or ride up in the elevator). While it's free to enter St. Peter's, the climb/ride carries a small fee, and entrance to the Vatican Museums is pricey (but well worth it, specifically to see the Sistine Chapel in person). The Vatican Gardens are available for viewing with tickets, as well, but note that these tickets may book up as far as six months in advance. Note: Vatican City is its own city and is not included in ROMA passes. Be aware that sleeveless shirts, shorts and short skirts or dresses are not acceptable attire within St. Peter's, and you will be banned from entering if you don't have a sufficient way to cover up. Bring a shawl, and be sure the attire on your lower half reaches at least to your knees.

The Colosseum (Piazza del Colosseo; open 9 a.m. and closing between 4 to 7 p.m., depending on the time of year) is the shell of an ancient stadium, first inaugurated in 80 A.D., where gladiators engaged in bloodbaths. The building is impressive, and you'll want to spend at least an hour taking it in. There are areas that are only accessible by foot and stairs, but there is also an elevator to reach the top. Across the street are the Roman Forum and Palatine Hill. Walking along the streets of the ancient ruins will transform you, as you envision what this central Italian piazza would have been like during the age of Caesar. Tickets to the Colosseum and Forum can be purchased together; lines are much shorter at the Forum ticket line.

Near the Colosseum, we always drop our jaws at the sight of the Vittorio Emanuele Monument (Piazza Venezia), an extravagant white-marble monument (nicknamed "the wedding cake") with giant horse sculptures, constructed in the 1800's to honor Italy's first king. You can't go inside, but it's a great photo opp.

The Pantheon (Piazza della Rotunda; open Monday to Saturday, 9 a.m. to 6:30 p.m., Sunday, 9 a.m. to 1 p.m.) dates back to 27 B.C. and is considered the ancient world's most complete monument. Even better, the Pantheon is more than a museum; it still holds concerts and other special events.

The Trevi Fountain (Piazza Trevi; open 24 hours) was made famous by the classic flick "Three Coins in a Fountain"; legend has it, if you want to come back to Rome, you must throw in a coin. Within walking distance are the Spanish Steps, which draw quite a crowd when the late afternoon sun begins to create a warm, golden hue over the 154 steps leading to the Trinita dei Monti. (If you can make the climb, a rooftop cafe awaits, offering wonderful views of the Roman skyline.)

For art-lovers, Galleria Borghese (Villa Borghese; open Tuesday to Saturday, 8:30 a.m. to 7:30 p.m.) has Rome's premier collection of masterpieces, including works by Titian, Caravaggio and Raphael.

Rome's most magnificent shops are clustered on streets branching off from the elegant Piazza d'Spagna (the Spanish Steps). The most chic stores are found on Via Veneto and Via Condotti; more mainstream (and affordable) stores are on the long Via del Corso. Take a coffee break at Antico Caffe Greco (Via dei Condotti 86), a place to see and be seen since it opened in 1760. Antique stores are clustered on Via del Babuino.

Ostia Antica (Via dei Romagnoli 717; open Tuesday to Sunday, 8:30 a.m. to 4 to 6 p.m., depending on the season), Rome's version of Pompeii, is about 45 minutes outside the city, but it's worth the trek. It was founded in the 4th century B.C. and was a bustling port city until a couple of factors -- outbreaks of malaria and the river's changing course -- led to its abandonment. Ultimately it was covered in silt, and the site has gradually been excavated over the past century.

Explore the hip urban neighborhood of Trastevere (just across the Tiber). Among its attractions, beyond tons of charming sidewalk cafes, one-of-a-kind boutiques, art galleries and restaurants, is the serene and soothing Orto Botanico (Largbo Cristina di Svezia 24, open Tuesday to Saturday, 9:30 a.m. to 5:30 or 6:30 p.m., depending on the season), comprising 19 different gardens. You'll also find the piazza of Santa Maria, one of the city's prettiest piazzas and the site where, according to legend, oil was said to have sprung from the ground on the occasion of Christ's birth. Santa Maria Cathedral, which anchors the square, is a soothing, restful stop.

One of Rome's most exuberant piazzas (traffic-free squares) is Piazza Navona, which is virtually a carnival. You can have your portrait drawn, sit by the fountain and enjoy a gelato cone, drink wine at a sidewalk cafe or dance to live music. Also fun is Campo dei Fiori, particularly if you like flea markets in the morning and fun, informal sidewalk cafes from lunchtime onward. (The only reason it's not called a piazza is that it isn't anchored by a church.)