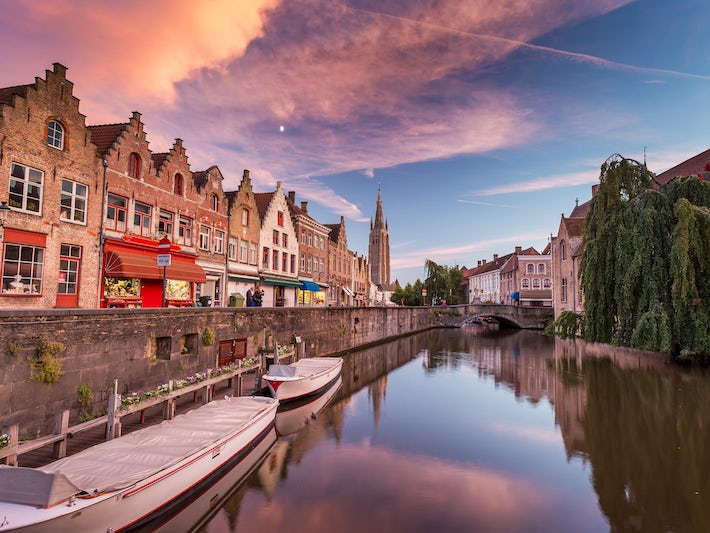 Find Things to Do in Brugge (Bruges) on Viator

Popular Things to Do in Brugge (Bruges)

Historic Attractions: The entire city feels like a museum, but a few sites really stand out for history, culture and art. Markt (Market Square) is a grand plaza surrounded with gabled houses and the 14th century Belfort (Belfry); it's a great central meeting place, and you can climb the 350-step Belfry for a great city view. Lots of restaurants and cafes line the perimeter, so when the feet say stop, have a seat and watch the crowds. The neogothic Provinciaal Hof houses the post office and an ATM.

The Berg, just steps away, has a beautiful stadhuis (city hall) -- one of the best in Europe. It's a gorgeous lat-14th/early-15th century Gothic building with numerous turrets and a facade decorated with statues of Flemish counts and countesses. A most colorful flower market takes place there on a regular schedule.

The Onze Lieve Vrouwekerk "Church of Our Lady" (Mariastraat, open daily from 10 a.m. - noon and 2 - 5 p.m., closed Sunday mornings), circa 13th century, is a draw for Gothic aficionados. It's also one of the few places outside Italy to have a sculpture by Michelangelo: "Our Lady and the Child Jesus." Across the street is the Museum St. Janshospitaal (St. John's Hospital Museum), with a restored chapel housing works by Hans Memling depicted on painted panels (opening hours are Tuesday - Sunday 9:30 - 5 p.m.). A restored 17th century apotheek (pharmacy) that used to serve the hospital is next door and free to enter.

Five minutes' walk from the station is Begijnhof, a serene courtyard lined with whitewashed houses that are home to about 50 single women. The compound is a surviving example of housing for a Catholic order (Begijnen or Beguines) of religious women whose husbands had died in wars and the Crusades. They adhered to chastity and vows of obedience but not poverty, so in this respect they differed from nuns. Hundreds of these communities used to exist right up to the beginning of the 20th century. Now there are but a handful and several, such as this one, are UNESCO World Heritage Sites. In spring, the green is a carpet of daffodils. Visitors may freely enter the courtyard.

Walking Tour: If you want to stretch your legs, we suggest the following walking tour, which should take about two hours or less, if you don't dally much. Begin by leaving the Markt at its southeast quarter and following Wollestraat to cross the canal, then turn left to parallel it. You pass through a square lined with attractive restaurants and then come upon the Vismarkt (fish market). Follow the canal as it arcs left and enjoy views back to the city's skyline. At St. Annakerkstraat, walk to the 15th century church of the same name. The off-the-beaten-track St. Anna quarter has some of the loveliest and most varied Flemish-style town houses in all of Belgium. Return to the canal and at the second bridge, turn left over the canal onto Genthof. You pass close to a statue of Flemish artist Hans Memling and come to Jan Van Eyckplein, a handsome square where the commercial canal boats used to gather for transferring goods to the Markt. The old toll house remains an imposing structure. From here follow the streets back to the Markt.

Sailing the Canals: Think Venice but with a Gothic feel (and, alas, no gondoliers or singing tenors). Numerous motorboat operators ply Brugge's waters; you can board these tour boats at a myriad of very obvious landings throughout the city (we boarded at Katelijnestraat 4, another option is the Rozenhoedkaai); cost is 5.20 euros for an approximately 30-minute ride.

The Cafe Scene: One of the nicest things about Brugge is, once you've worn yourself out exploring historical and cultural sites, you can hang out with a restorative Belgian beer at a cafe at one of the city's handful of really great plazas. Admittedly, the cafes are primarily oriented to tourists but the atmosphere is so much fun ... so what! Many of the city's best restaurants are open for lunch, but watch out for highly irregular summer operating hours. Le Grand Cafe Belfort (Markt 25 or Eiermarkt 16, from 11:30 a.m.) is a terrific place to indulge in huge individual stockpots of steamed mussels (you can choose how you want them cooked: in a cream sauce or with garlic, beer or wine) along with a plate of crisp fries (called "potato chips"). Menus are posted outside.

The Verdi tea room (Vlamingstraat 5), a quiet retreat from the pedestrian crowds, serves meals, light snacks and a proper afternoon tea attended by local ladies. It is a good place to try Belgian waffles with chocolate sauce or various jams. A croquet-monsieur (grilled ham and cheese on bread) is another good choice for a light lunch.

Shopping: Brugge has all manner of boutique-style shops selling jewelry, fashion and art but the best stops are in the numerous chocolateries. The main commercial street is Steenstraat, but the city is so compact and its numerous winding alleys and boulevards so compelling, you can find lots of neat discoveries beyond the main drag. Most shops (except really touristy ones) close for lunch between noon - 2 p.m.

Brussels: If you've already toured Brugge, head to Brussels for the day (trains leave every hour on the half-hour from Blankenberg Station, and roundtrip tickets cost 23 euros). Brussels is divided into the Lower Town and the Upper Town. Start in the Lower Town, which dates from the Middle Ages to the 18th century and has lots of Gothic-, Baroque- and Renaissance-era buildings. Among the highlights: The Grand Place, a gorgeous cobbled square at the heart of the Lower town; the imposing 15th century cathedral Notre Dame de la Chappele (Rue des Ursulines 4, open from 10 a.m. - 4:30 p.m.); and the flea market in Place du Jeude (7 a.m. - 2 p.m., best days are Thursday and Sunday). The neo-Renaissance Galeries St. Hubert (Rue de Bouchers, open daily) was Europe's first shopping arcade. The Museum of the Comic Strip (20 rue des Sables, Tuesday - Sunday from 10 a.m. - 6 p.m.) is a hoot, featuring everything from Tintin to the Smurfs. For lunch, rue des Bouchers is lined with sidewalk cafes featuring a wide variety of international menus and, yes, it's touristy but still fun.

The Upper Town is terrific for museum- and palace-hopping. Start with the Quartier Royal, the area's most distinctive and picturesque plaza, surrounded by 18th and 19th century palaces and the gorgeous Parc de Bruxelles. The Palais Royal (Place des Palais, open July - September only, from 10:30 a.m. - 4:30 p.m. Tuesday - Sunday) is the official residence of Belgium's monarchy. Musees Royaux des Beaux-Arts and Musee d'art Ancien (Rue de la Regence 3, Tuesday - Sunday from 10 a.m. - noon and 1 - 5 p.m.) are the city's preeminent art museums; the former houses masterpieces from contemporary eras while the latter focuses on classical pieces.

Beaching: Head for the beach in Zeebrugge. Visible from the terminal (but, alas, requiring a taxi ride) is a gorgeous white sand beach stretching along the North Sea. Zeebrugge itself has a charming boardwalk fronted by cafes.

Alternative Destinations: From Zeebrugge and Antwerp, cruise ships offer city tours to a variety of cities (Brugge, Ghent, Ypres, etc.) rather than multiple kinds of tours in the same area. If you've already been to Brugge, you might want to tour Ghent or Ypres instead. Ghent is larger and -- according to some -- more authentic than Brugge. A walking tour covers a series of connecting squares and churches, and may include a canal boat ride. Ghent is a 45-minute drive from either Zeebrugge or Antwerp.

Ypres is one of Europe's most famous battle sites. The city was caught between the advancing Allied and German armies in WWI and largely destroyed. A tour of the pleasant provincial city (rebuilt since the war) typically includes a visit to the Flanders Fields Museum, which depicts the life of the ordinary citizens caught in the crossfire. Ypres is an hour's drive south from Zeebrugge.