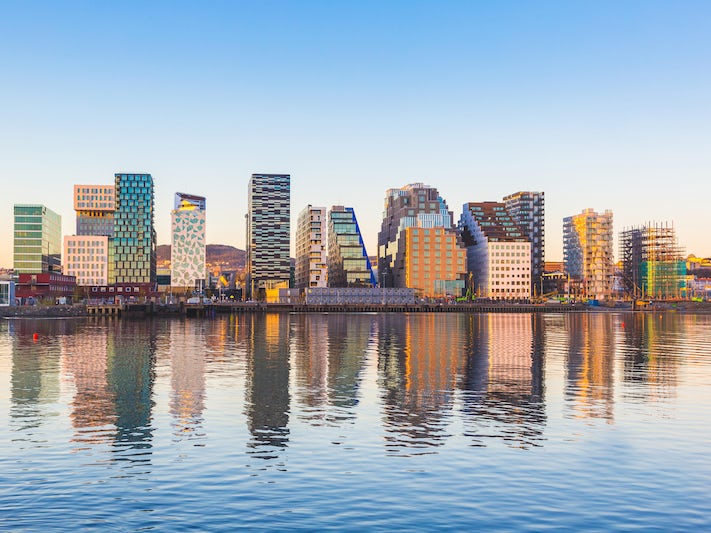 Find Things to Do in Oslo on Viator

Popular Things to Do in Oslo

Food and Drink in Oslo

Not surprisingly, many of Norway's signature dishes come from the sea. Salmon, trout, cod and halibut are on most menus. So is spekemat, a plate that includes cured ham, sausage and mutton. Smorbrod, the popular Scandinavian open-face sandwich, makes a nice appetizer and koldbord or "cold table" is the equivalent of Sweden's smorgasbord. A couple of local favorites: fiskesuppe, a fish soup rich with egg yolks and cream, and freshly boiled shrimp on white bread with mayonnaise and lemon juice. Locally produced beer is noted for its high quality. Suggested tipping is 5 to 10 percent for good service.

For People Watching: The famous Grand Cafe in the Grand Hotel, where Henrik Ibsen and Edvard Munch once hung out, is the oldest and most fashionable cafe in the city. (It is from the balcony of the venerable Grand Hotel that the Nobel Peace Prize winner is introduced to the public each year.) The cafe, which has a mural painted in 1928 of Ibsen's and Munch's likenesses, is also perfectly positioned for people-watching. Lunch selections include regional fare, such as wild salmon and grass-fed lamb. It's located one block from Parliament at Karl Johans Gate and Rosenkrantz Gate. Look for the red awnings. (open for lunch 11 a.m. to 4 p.m. Monday to Friday, noon to 4 p.m. Saturday and 1 p.m. to 5 p.m. Sunday; breakfast is also served)

Best Upscale Eats: Gourmet seekers should try Theatercafeen. It's a Viennese-style cafe with a hip audience that's long been popular with local theatergoers and visiting celebrities. (Stortingsgt 24; noon to 2:30 p.m.)

Best for Families: Check out Najaden at the Norwegian Maritime Museum, where kids younger than 12 can have the Scandinavian lunch buffet (lots of fish and meat) for half price. (Bygdoynesveien 37; noon to 6 p.m. daily)

If there's one must-see attraction, it's the Nobel Peace Center across from the waterfront and near City Hall. The prize is named for Alfred Nobel (1833-1896), a scientist who accumulated 355 patents (he invented dynamite among other things) and became one of the richest men in Europe before giving his fortune to a fund. The remaining Nobel prizes in physics, chemistry, medicine and literature are awarded in Nobel's native Sweden. The center in Oslo is in a converted, historic train station but is all cutting edge, high tech -- lights flash, audio comes from odd places, and stories of both hate and peace are told. Quotes depicted on a video wall of changing quotes include Nehru's, "You don't need genitals for politics, you need brains." On the second floor is a documentary explaining the achievements of various laureates including the Rev. Martin Luther King Jr. and the Dalai Lama and the striking Nobel Field, the equivalent of a Hall of Fame display of all laureates; their headshots appear in a dark room at eye level on sticks placed among smaller sticks, with lights resembling flowers in a field of grass. Haunting modern music plays in the background -- it's a magnificent installation. The small gift shops have items with peace symbols, and the museum has a lovely cafe with indoor and outdoor seating. (Radhusplassen; open 9 a.m. to 7 p.m. daily)

Additional Nobel history, among other things, is on tap at City Hall, where the Peace Prize ceremonies are held annually. City Hall also features a fantastic series of murals depicting everything from scenes of real life to exciting glimpses of resistance efforts during World War II. Upstairs is a quaint painting of a family sitting around a tree by native son Edvard Munch (most famous for not-so-quaint "The Scream"). (Radhuspl; open 9 a.m. to 5 p.m. Monday to Saturday, noon to 5 p.m. Sunday)

The newly developed waterfront is a lively place with outdoor cafes, trendy shops, street musicians and other performers. The eastern end is anchored by the fabulous Oslo Opera House, which looks like two icebergs rising from the fjord. Opened in 2008, the opera house -- fashioned from 36,000 slabs of white Carrara marble -- is one of Norway's most popular attractions. It's outstanding. More recently, in 2012, the Astrup Fearnley Museum of Modern Art reopened at the western end of the waterfront in a new building designed by world-famous Italian architect Renzo Piano. The collection includes items by Andy Warhol, Richard Prince, Robert Gober, Matthew Barney, Cindy Sherman and Bruce Nauman. The museum has a beach, sculpture park and an observation tower with terrific views across the capital. (Strandpromenaden 2; open noon to 5 p.m. Tuesday, Wednesday, Thursday, noon to 7 p.m. Friday and 11 a.m. to 5 p.m. on weekends; closed Mondays)

Near the ship piers, the Medieval Quarter has interesting historic relics including Akershus Fortress (Festningspl; 10 a.m. to 4 p.m. Monday to Saturday, 12:30 p.m. to 4 p.m. Sunday) It dates to the 17th century. State and royal events are still held there. The site boasts gorgeous gardens and its hilltop locale offers great views of Oslo and the fjord. Also on site is the fascinating Norwegian Resistance Museum (Festningspl; 10 a.m. to 4 p.m. Monday to Saturday, 11 a.m. to 4 p.m. Sunday) showcasing exhibits from Norway's strong allied resistance efforts. Exhibits include a molar with a radio receiver implant that allowed resistance fighters to follow the news.

Some of Oslo's most intriguing museums emphasize its relationship with the sea, and they're all located on the peninsula of Bygdoy. The Kon-Tiki Museum (Bygdoynesveien 36; 10 a.m. to 5 p.m. daily) showcases the balsa-wood raft that native son and explorer Thor Heyerdahl sailed from Peru to Polynesia. The Viking Ship Museum (Huk Ave. 35; 10:30 a.m. to 5 p.m. daily) features ancient Viking ships that date to 800 A.D. and an interesting collection of found utensils and jewelry. While you're in the neighborhood, stop by the Fram Museum (Bygdoynesveien 36; 10 a.m. to 5 p.m. daily) which houses the ship that took 19th-century explorers to the South Pole and the Arctic. And not the least bit maritime in theme but fascinating nevertheless is the Norwegian Folk Museum (Museumsv. 10; 9 a.m. to 5 p.m. daily); the open-air collection of some 150 buildings dates to the 17th and 18th centuries. Visitors get the feeling they're actually wandering through a Norwegian town of yesteryear.

For art lovers, there are two must-sees. First is the Munch Museum (Toyen Gate 53; 10 a.m. to 6 p.m. daily). Expressionist Edvard Munch donated his art to the city when he died in the mid-20th century, and the museum houses the largest single collection of his works in the world with roughly 1,100 paintings and more than 20,000 prints and drawings. The second is Vigeland Sculpture Park (entrance on Kirkeveien; open 24 hours). Allow yourself time -- on a nice day -- to enjoy this park at leisure. Part of the 80-acre Frogner Park on the outskirts of town , this fantastic outdoor sculpture garden features the work of Gustav Vigeland, who created life-sized -- as well as larger than life -- pieces that depict the cycle of life from birth to death. Vigeland, born in 1869, was a great admirer of Rodin and Michelangelo -- and it shows. There are more than 200 granite, bronze and iron sculptures, representing 600 figures exhibiting an array of human emotions.

Check out the Holmenkollen Ski Jump (Kongeveiven 5) in Oslo's western hills. This site of ski jumping since 1892 was rebuilt in the mid-20th century to host the 1952 Olympics and torn down and rebuilt to accommodate the 2011 World Championships. Enjoy the awesome view overlooking the city and the fjord; there's an Olympics' museum and a ski simulator. New in 2013: a zip line.

Take a boat ride along the fjords. Directly on the docks are boat operators, and you can hop on any range of "cruises," from quick 50-minute overviews of the waterways to 2.5-hour fjord tours. The tours pass the Opera House, idyllic bays and a maze of islands with small and colorful summer houses.

Flawed police detective Harry Hole is the protagonist in a series by Norwegian crime writer Jo Nesbo. Nesbo is an Oslo homeboy, and lucky for fans, there is a two-hour "Discover Harry Hole's Oslo" walking tour of the places that Hole frequents: the courthouse, the watering holes Underwater Pub and Schroder, the Royal Palace park, Egertorget Square and Sofies Gate. You can buy tickets online at Oslo Guidebureau or directly from your guide.