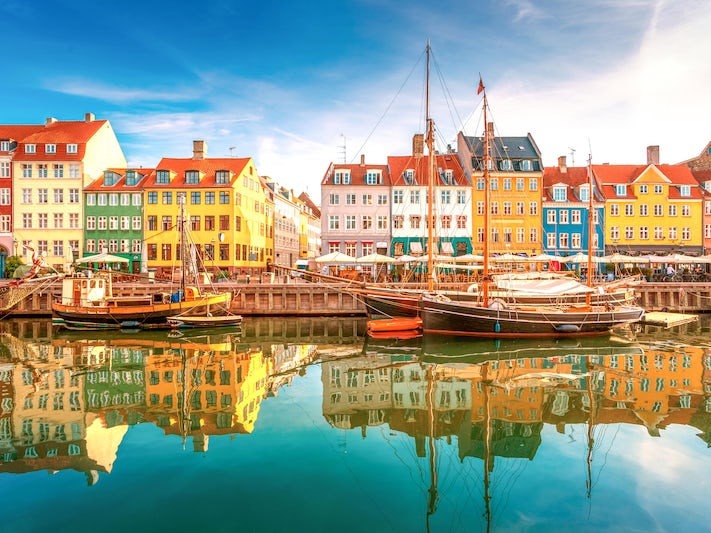 Find Things to Do in Copenhagen on Viator

Popular Things to Do in Copenhagen

Food and Drink in Copenhagen

Copenhagen Street Food Market: Denmark's best fare is arguably its open-face sandwiches or smorrebrod and its legendary hot dogs, which can be bought from the many carts scattered throughout the city. Dining at a sit-down restaurant can be expensive there, so you might want to consider grabbing a bite at Copenhagen Street Food Market, a former warehouse and docking area now lined with food trucks for frugal and fun dining.

Torvehallerne: Another possibility is Torvehallerne, the city's covered food market, where food stalls and snack bars offer fresh fare and a lively atmosphere.

Nimb: Try Nimb, a beautifully restored historic structure at Tivoli Gardens that houses an upmarket boutique hotel, deli, market, restaurant and brasserie. Aim for the latter, which, although a bit pricey, offers fantastic views of the grounds. (You might even catch a performance while dining on the terrace.) The food is traditional Danish with a contemporary flair.

Spcafeen: Another option at Tivoli is Socafeen for Danish sandwiches and cold beer, overlooking Tivoli Lake.

Restaurant Schonnemann: Our pick for the ultimate smorrebrod experience, this local favorite offers a medley of Danish open-face sandwiches, featuring a dark rye base with toppings like silky gravlax with mustard and dill or curried herring. They suggest you try three or four of these tapas-sized sandwiches and, of course, an aquavit. They've been doing this since 1877, and they've gotten it right. We suggest lunching on the late side to avoid crowds. (Hauser Plads 16; +45 3312 0785; open daily from 11:30 a.m. to 5 p.m.; closed Sundays)

Noma: Of course you've heard of this one. It's considered one of the top restaurants in the world and has been rated the absolute best in the world four times. Be prepared to have your taste buds challenged by Chef Rene Redzepi, who brings local cuisine to an elevated level, incorporating ingredients like forest ants (sprinkled atop steak tartar with celery oil) into his 20-course tasting menu. You might encounter squid and fennel served in an ice bowl, rhubarb creme fraiche and sorrel, as well as other creative pairings. Service is flawless. After your meal, tour the kitchens, including the fermentation lab. Yes, it's pricey -- currently 1,700 DKK (about $255 USD), including 25 percent VAT -- but if you're a committed foodie, you'll agree the splurge is worthwhile. Reservations are accepted three months in advance online at www.noma.dk/reservations/ or by phone from Mon to Friday, 10 a.m. to 4 p.m. (local time). (Refshalevej 96; +45 3296 3297; open Tuesday to Saturday, 5 p.m. to 1 a.m.)

North Zealand: For chilly dips, sunsets and sand beneath your feet, head about 38 miles out of town to the beaches of North Zealand. They include Gilleleje, Liseleje and Tisvildeleje. The easiest way to get to the North Zealand beaches is first by train to Helsingor, then by bus. If you've got time, check out any of the little resort towns along the coast. As a side note, North Zealand has more castles and palaces than any other region in Denmark. We highly recommend checking out at least one. Our favorite is Frederiksborg Castle in Hillerod, near Lake Slotso. It's as beautiful inside as it is from the outside; you'll tour dozens of rooms filled with magnificent tapestries, paintings and antiques.

Sightseeing Tours: An excellent option for general sightseeing is any one of several bus or canal tours. The nearly three-hour Grand Bus Tour that departs from Town Hall Square includes drive-by views of Tivoli, the Carlsberg Visitor Centre, Christiansborg Palace, the Danish Royal Theater, Nynhavn, Gefion Fountain, Grundtvig Church and Rosenborg Castle. There are short stops to see the Little Mermaid, the changing of the guard at Amalienborg Palace and the Church of Our Lady. The 1.5-hour-long hop-on, hop-off bus tour includes much of the same, but it offers an on/off option for those who wish to linger a bit longer at some of the stops. Tickets are good for 24 hours or 48 hours of use. For those who prefer to tour on foot, Copenhagen Free Walking Tours (three hours long) meet every day at 11 a.m. and 3 p.m. on the steps of Town Hall Square and end near Amalienborg Palace.

Little Mermaid: The coyly reclining statue is quintessential Copenhagen, inspired by Hans Christian Andersen and sculpted by Edvard Eriksen in 1913. She has been decapitated three times and painted red by vandals, but she happily survived all this, due to the fact that her original mold exists, so body parts can be replaced if necessary.

SMK, The National Gallery of Denmark: The biggest museum in the country, this is where art from the 13th century to the present is exhibited. Works by Rubens, Rembrandt and Hals share the walls with Eckersberg, Kobke and Hansen. French 20th-century art includes 20 works by Matisse. Works by younger Danish and international contemporary artists are featured in the x-room. (Solvgade 48-50; free admission; open Tuesday and Thursday to Sunday, 10 a.m. to 5 p.m., Wednesday 10 a.m. to 8 p.m., closed Monday)

Tivoli Gardens: Since opening in 1843, this 20-acre park has delighted visitors. Set in the heart of the city, this charming park was said to be Walt Disney's inspiration for DisneyLand. More than 400,000 flowers (and almost as many sparkling lights after dark) are a colorful setting for amusement rides (including a high-speed roller coaster), live music, 40 restaurants and a fireworks display on Saturday nights. Don't miss the Pantomime Theater's evening performances of ballet and acrobatics, a beloved tradition since 1844. Tivoli is closed from mid-September until April, but opens for a few weeks prior to the Christmas holidays with a terrific Christmas market and the chance to channel your inner Hans Christian Andersen by ice-skating on the lake. (Vesterbrogade 3; open Sunday to Thursday, 11 a.m. to midnight, and Friday and Saturday from 11 a.m. to 1 a.m.

Amalienborg Palace: The four 18th-century French Rococo-style mansions that make up the palace grounds have been the homes of the Danish royal family since 1794. Watch the changing of the Royal Danish Guard at noon, when the royal family is at home. (You'll know they're home if the swallowtail flag is flying above the palace.) Capped in black bearskin busbies, the guards begin marching at 11:30 a.m. from the barracks by the Rosenborg Palace; the route varies depending upon which royal is in residence. For the Queen, it goes along Rosenborggade, Kobmargergade, Ostergade, Kongens Nytorv, Bredgage, Sct. Annae Plads and Amaliegade. When the princes are residing at the palace, but not as regents, the parade route is along Gothersgade, CHr.IX's Gade, Kr. Bernikowsgade, Kongens Nytorv, Bredgade, Fredericksgade and Amalienborg. After the change, they return along those same routes back to Rosenborg, accompanied by a band. Visitors have access to Christian VIII's Palace, since Queen Margrethe lives at Christian VII's. (Kobenhavn 1257; open daily from May to September, 10 a.m. to 5 p.m.; closed Mondays from October to April)

Christiansborg Palace: Home to the Danish Parliament, the Supreme Court and the Royal Reception Rooms, the palace is a must-see. Take one of the guided tours (daily, noon to 4 p.m.) to see the Reception Rooms, the Royal Stables, the Great Hall (with the Queen's Tapestries) and Parliament. Also check out the ruins (daily, May to September, 10 a.m. to 5 p.m.; closed Mondays October to April) of the 1167 castle of Bishop Absalon (founder of Copenhagen), located under the palace. (Christiansborg Slotsholmen)

Kastellet: A citadel constructed by King Frederik III in the 1660s and still with some of its original ramparts, this was the city's main fortress until the 18th century. During the Nazi occupation, it served as the Germans' headquarters. Though the Danish military occupies its buildings today, visitors can stroll the lovely grounds, including the five-point moat. (Langelinie; open daily, 6 a.m. to sunset)

Our Savior's Church (Vor Frelsers Kirke): If you're up for some exercise, trek the 400-step spiral steeple of the Baroque church to take in an amazing city view. Urban legend says the architect jumped from the steeple when he realized the winding staircase curved the wrong way. Save enough time to see the carved organ case. (Annaegade 29; open daily from 11 a.m. to 3:30 p.m.)

National Museum of Denmark: Jam-packed with anthropological artifacts from the Upper Paleolithic period to the mid-19th century, the museum houses the largest collection of cultural artifacts in the country. The Viking stones and helmets are amazing, as are the 3,000-year-old Lur horns (among the oldest musical instruments in Europe) and the 3,500-year-old Sun Chariot. We recommend seeing the Royal Collection of Coins and Medals, too. (Ny Vestergade 10; free admission; open Tuesday to Sunday, 10 a.m. to 4 p.m.)

Rosenborg Castle: The 17th-century Renaissance-style castle was built as a summer home for Christian IV, who ruled from 1588 to 1648. Wait until you see the ivory coronation chairs and Frederik VII's baby shoes. Three silver lions guard the thrones of the king and queen, surrounded by tapestries that depict historic battle scenes between Denmark and Sweden. Rooms, chronologically arranged, feature royal family artifacts, including Christian IV's crown -- atwinkle with gold, diamonds and pearls -- and the crown jewels still worn by H.M. the Queen on special occasions. (Monday through Saturday, 9 a.m. to 6 p.m. during summer; 10 a.m. to 4 p.m. September to October; Tuesday to Sunday, 10 a.m. to 3 p.m. November and December)

Vor Frue Kirke Church: Be sure to see Bertel Thorvaldsen's statues of Christ and the 12 apostles at the neoclassical 11th-century church. Visitors are not permitted to enter during religious services or other events.

Copenhagen Amber Museum: Apart from the largest chunk of amber in the world, the museum has an excellent collection of amber embedded with insects, plants and other prehistoric material. There's a shop downstairs where you can buy high-quality amber jewelry. (Kongens Nytorv 2; open daily, May to September, 10 a.m. to 6:30 p.m.; daily, October to April, 10 a.m. to 5:30 p.m.)

Visit Carlsberg: Got beer? Beyond a brewery tour, this stop pays homage to the famous Danish beer (launched in 1847) with a sculpture garden, horses in harness and the world's largest collection of unopened beer bottles from around the globe. Of course there are beer samplings and tastings; the brew house is also a popular place to have lunch. (Gamle Carlsberg Vej 11; open daily, 10 a.m. to 5 p.m., except Mondays from October to May)

Danish Jewish Museum: Designed by Daniel Libeskind (who also designed New York City's Freedom Tower at the site of the former World Trade Center), the museum is located in the former Royal Boathouse built by Christian IV in 1598. Exhibits highlight Jewish life in Denmark, including culture, art and history, extending back to the first Jewish immigration 400 years ago. (Access through Proviantpassagen from Christians Borg and Christians Brygge; open June to August: Tuesday to Sunday, 10 a.m. to 5 p.m.; September to May, Tuesday to Friday, 1 p.m. to 4 p.m., and Saturday to Sunday, noon to 5 p.m.)

Kronborg: Some say Kronborg is the greatest castle in the country; it's located about 40 minutes from Copenhagen (reachable by train). The "Elsinore Castle" of Shakespeare's Hamlet, this UNESCO World Heritage monument was built between 1574 and 1585. With its soaring towers and grand ballroom, Kronborg is one of the most important Renaissance castles in Northern Europe. In August, it hosts a Shakespeare festival. (open daily April to May, 11 a.m. to 4 p.m.; June to August, 10 a.m. to 5:30 p.m.; September to October, 11 a.m. to 4 p.m.)

Royal Stables: At what have been the actual stables of the Royal Family since 1778, you'll see riders exercising the royal horses on your visit. Check out the Harness Room to see old uniforms, an ornate eight-horse harness and the Royal Family's carriage. Inside the Coach Hall are old but well-preserved state coaches and carriages. (Christiansborg Ridebane 12; open Saturday and Sunday from 2 p.m.)