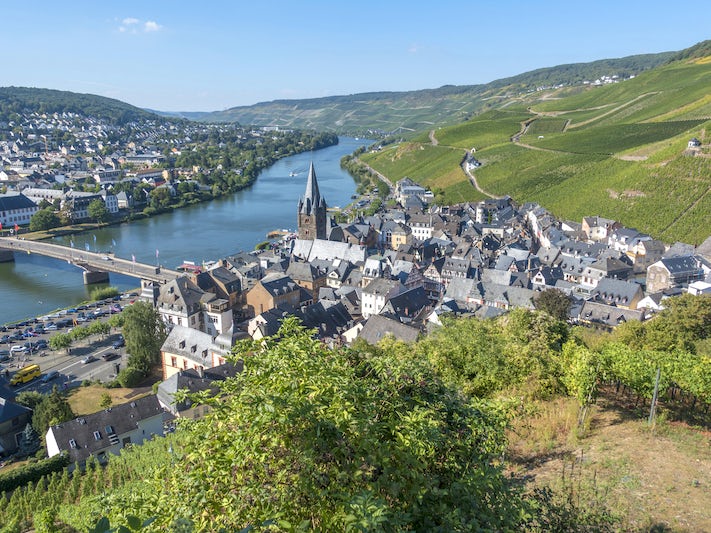 Find Things to Do in Bernkastel-Kues on Viator

Popular Things to Do in Bernkastel-Kues

Wine: Bernkastel has some of the oldest vineyards in Germany, and the crisp whites that come from the region are world famous. There are several ways to tipple, depending on your level of enthusiasm. The easiest is to walk into town, find a cafe and order a few glasses from different vineyards; plenty of wine shops also offer samples. If you're more ambitious, set up your own tasting at a local winery such as Dr. Pauly-Bergweiler or Dr. Loosen, the latter well known here in the States (often river cruise lines include a tasting at similar vineyards in their tour options). Another option, also part of some river cruise itineraries, is a visit to the Mosel-Vinothek & Wine Museum; tastings are also part of the draw here. Or if you're a true fanatic, make sure you time your Moselle river cruise during a wine festival. The town's largest kicks off the harvest season during the first weekend of September, but nearby towns have theirs throughout the summer and fall.

Luxembourg: Some river cruises run an optional excursion from Bernkastel to the country of Luxembourg, about a 90-minute drive. Highlights of the country include Luxembourg City, where the historical center and fortifications have UNESCO World Heritage status. If you have a whole day in the city, make time to visit the Bock casements, tunnels that run under the old fort. If your time is limited, meander around the plazas and stop at a cafe, where you'll find the food to be a nice mix of French flavors and German portion sizes. Most Luxembourg day trips also stop at the small country's American Cemetery. Many veterans of World War I and World War II are buried here, marked with white crosses. The cemetery is also the final resting place for General George S. Patton, who famously asked to be buried with his men. A moving experience.