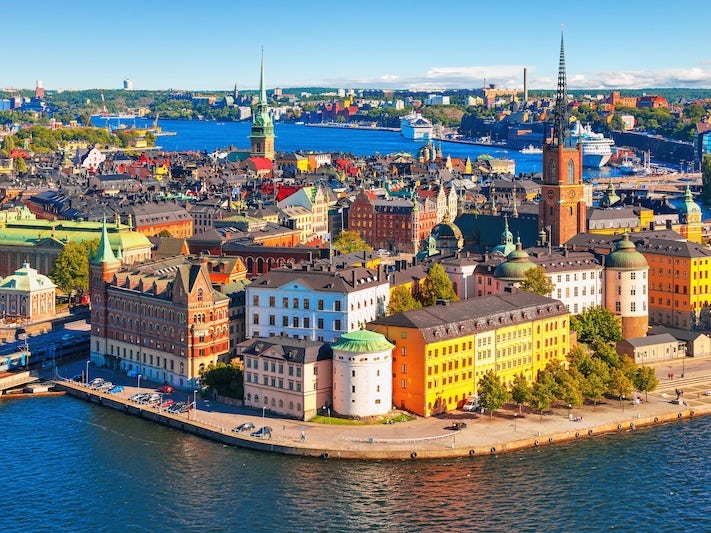 Find Things to Do in Stockholm on Viator

Popular Things to Do in Stockholm

Food and Drink in Stockholm

There probably are three constants in Swedish meals -- lingonberries, open-faced sandwiches and pickled herring. Expect to find the tart berries, or sauce made from them, next to or on top of numerous entrees and desserts. Herring is served marinated in onions, garlic, dill and mustard, and is typically accompanied by boiled potatoes and bread. As for the sandwiches on one thick slice of bread, expect the toppings to range from herring to shrimp -- a favorite -- to game like reindeer and boar.

Swedes love baked goods, especially during their coffee breaks. A colorful favorite is the princess cake: layers of sponge cake separated by jam, custard and whipped cream, topped with icing in brilliant colors.

At the Ostermalmshallen (Food Hall) downtown, set in a vast but handsome building that opened in 1888, vendors still offer the freshest seafood, meat (including reindeer and moose), produce, cheese and chocolate. Locals also head there for its 10 restaurants and delis. (Open Monday through Thursday from 9:30 a.m. to 6 p.m., Friday from 9:30 a.m. to 7 p.m., Saturday from 9:30 a.m. to 4 p.m. Try a museum cafe when you want a bite to eat in the middle of your sightseeing. A perfect spot to relax after visiting the Vasa Museum and its multiple floors of exhibits and viewpoints is its fairly large dining room. Freshly made sandwiches, salads, yogurt, a few hot entrees and desserts are served buffet-style; you can even get beer or wine. The fare is simple, but the waterfront view, indoors and out, makes it seem special.

Speaking of dining room panoramas, you can't do better than the Operakallaren, the restaurant in the grandiose Royal Swedish Opera House. The menu is haute cuisine: foie gras, fried quail, saddle of venison. It all comes with a view of the busy harbor. (Open Tuesday through Saturday, 6 p.m. to 10 p.m. Royal Opera House, Jacobs Square 2).

Prinsen lacks such views; now in its second century, the restaurant is on a side street off a commercial boulevard. But contemporary prints, rich wood furnishings and leather chairs lend a clubby air, and its menu offers traditional Swedish fare, such as bigg rydberg (cubes of filet, onions and potatoes) or five kinds of herring, served with potatoes and cheese. (Open Monday through Friday from 11:30 a.m. to 11:30 p.m., Saturday and Sunday from 1 p.m. to 11:30 p.m. Master Samuelsgatan 4).

The island of Sodermalm was once a working-class residential area, and a few remnants of those times still remain. Among them is Pelikan, an understated restaurant that specializes in old-time Swedish cuisine and a variety of beers. This is a prime spot to taste meatballs in cream sauce (a Swedish tradition), fried herring, and potato dumplings stuffed with wild mushrooms and served with -- what else? -- lingonberries. (Open Monday through Thursday from 4 p.m. to midnight, Friday and Saturday from 1 p.m. to 1 a.m., and Sunday from 1 p.m. to midnight. Blekingegatan 40).

Stockholm's top tourist spot is the island of Gamla Stan, the city's Old Town that's a fascinating step back in time. However, the area can be a victim of its own success. Summer visitors often clog the main streets, Stora Nygatan and Vasterlanggatan, and an overabundance of tourist shops selling moose-themed t-shirts and other knickknacks detract from Gamla Stan's charm. To escape the crowds, simply turn into one of the many alleyways and lesser streets between the apartment buildings. These less-busy paths mostly lead uphill to the 600-room Royal Palace. On these narrow streets, you'll find rare book dealers, small cafes that serve the residents, and small parks where locals and visitors go to relax.

Gamla Stan is also the site of the Nobel Museum, located in a 13th-century plaza. In conventional display cases, but also in movies and via a slow parade of overhead posters, this museum tells the stories of Alfred Nobel, who made his fortune by stabilizing nitroglycerin into what we call dynamite. It also addresses those who have been honored with his namesake prize in the categories of the sciences, the arts and peace. (All except the peace prize are handed out in Stockholm.) After learning about the laureates, have a staffer in the museum's small bistro show its new, but hidden, prizes: Laureates have begun signing the bottoms of the chairs when they visit the museum. Hanging above all is the chair signed by the Dalai Lama. (Open May through September, Wednesday through Monday from 10 a.m. to 6 p.m., Tuesday from 10 a.m. to 8 p.m.; October through April, Tuesday from 11 a.m. to 8 p.m., Wednesday through Sunday, 11 a.m. to 5 p.m. Borshuset Stortorget, in Gamla Stan).

Less than two blocks from the Nobel Museum is the huge Royal Palace, the in-city residence of Sweden's monarchs. Tourists can stroll through the grand reception rooms, as well as museums displaying the crown jewels, armor and art. Take a spot in front of the Palace's curved, open courtyard at 11:45 a.m. each day to witness the changing of the guard at noon; the troops are preceded by a band, and sometimes the soldiers are on horseback. (Open January 2 through May 14, Tuesday through Sunday from noon to 4 p.m.; May 15 through September 16, daily from 10 a.m. to 5 p.m.; September 17 through December 30, Tuesday through Sunday from noon to 4 p.m. Kungliga Husgeradskammaren).

If you want to get an elevated view of Stockholm, you have several options. You can head to the residential island of Sodermalm via a cab or the 2 or 3 buses. Walk over to Fjallgatan Street and its terrass (terrace), which offers an elevated panorama of Stockholm's sights and waterways. Or, you can buy a ticket to Skyview, two 16-passenger, glass-walled gondolas that travel up the side of the world's largest spherical building, the Ericsson Globe arena. The ride lasts about 10 minutes in each direction. (Open Monday through Friday from 9 a.m. to 7 p.m., Saturday and Sunday from 9:30 a.m. to 6 p.m. Globentorget 2).

The most-challenging option is to take the Historic Rooftop Tour, where you'll walk about 130 feet above the city, atop the former Parliament building. Up to 10 participants at a time don helmets and safety harnesses attached to a steel cable. The cable follows a 980-foot-long metal catwalk -- about a foot wide, lacks handrails and includes some stairs -- around the top of the building. For the next hour or so, the guide explains the view below and adds dollops of local history. The tour is offered several times a day, most of the year, including at twilight and during snow or rain; however, it does sell out quickly, so reserve your spot early whether you're booking independently through Upplev Mer or through a ship tour. (Birger Jarls Torg, Riddarholmen).

Do as the locals do, and step aboard sightseeing boats for a cruise through the archipelago, comprising an estimated 30,000 islands. Depending on the time of day, passengers can book a casual sit-down meal in the ship's dining room. Narration of the passing scene is in English. The cruises last from two to eight hours; if you have enough time, step off the outbound boat to stroll the hamlets on various islands, have a meal and a drink, then catch a later boat returning to Stockholm. Some cruises operate several times a day, year-round; some cease in late November and return in February. Boats leave from the downtown harbor, along Strandvagen street, berth No. 16.

City Hall (the Stadshuset) is one of Stockholm's top tourist attractions, with tours given in English and Swedish every day. Visitors come not to observe the 101-seat City Council in action but, rather, to admire the architecture and decor of the building, built in 1923 and designed as a romantic interpretation of an Italian villa. The big draws are the Blue and Golden Halls. The Blue Hall was designed to resemble the piazza of a villa; there is even a false balcony projecting from one wall and beneath it, a fountain. Every December, this vast room becomes the banquet hall for 1,300 guests celebrating the Nobel Prize honorees. (The awards are presented about a mile away.) After the banquet, dancing takes place in the spectacular Golden Hall -- its walls covered by 18-million tiny tiles of gold leaf pressed between sheets of clear glass. The walls are further decorated with heroic-size images of figures from actual history, mythology and religion.

A separate ticket is necessary if you want the view from City Hall's 322-foot-tall tower. An elevator takes you only part way up, however, and there are no viewing windows at that level. (Guided tours: June through August, daily, every 30 minutes from 9:30 a.m. to 3:30 p.m.; January through May and September through December, daily at 10 and 11 a.m., noon and 2 p.m. Hantverkargatan 1).

One of Stockholm's 14 islands, Djurgarden, is both a huge park (part of the Ekoparken that stretches more than six miles) and site of some of the city's most popular attractions. The Vasa Museum is there, as well as the eclectic Spiritmuseum & Absolut Art Collection (daily, 10 a.m. to 5 p.m.), with its dozens of works commissioned for the state-owned vodka company's ads. Also on Djurgarden is a small zoo of Nordic animals, formal gardens, walking/biking paths, a former royal palace, a kids' park devoted to creations by the author of Pippi Longstocking, and a coaster-crazy amusement park.

Taking up the largest space on Djurgarden is Skansen (Djurgardsslatten 49), a collection of more than 150 authentic 19th- and early-20th-century structures gathered from around Sweden. They were taken there by a man who did not want to see progress obliterate remnants of the olden days. To do justice to Skansen and the other Djurgarden attractions, give the island a full day. You can take a ferry to Djurgarden from Gamla Stan, or hop on the No. 44 bus or No. 7 tram.

If you're looking for a different take on the city tour, Stockholm has several unique and themed tours to show you the city in a new way. The Stockholm City Museum offers two-hour, English language tours that trace the haunts of the music group ABBA or Stieg Larsson's "The Girl With the Dragon Tattoo" series. You can also pick up a map with the route to tour on your own. Alternately, try a 1.5- to 2.5-hour Segway tour, offered by both Uppner Upplevelser and Daytrip Stockholm.

If you're interested in old coins, you'll find the three-story Royal Coin Cabinet, or Mint Museum, just across the street from the Royal Palace. Humans have used everything from bones to stones, metal and paper as currency, and you can see collections of coins and other items here. (Open daily 10 a.m. - 4 p.m. Slottsbacken 6).