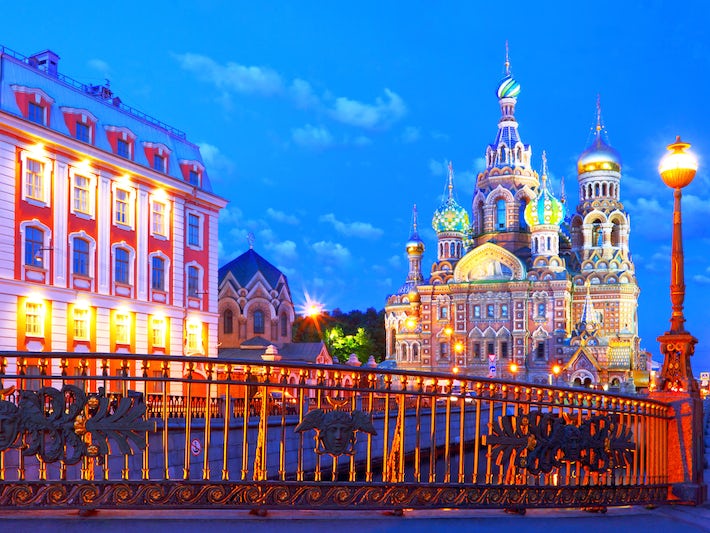 Find Things to Do in St. Petersburg on Viator

Popular Things to Do in St. Petersburg

Food and Drink in St. Petersburg

St. Petersburg's dining scene has experienced a facelift in recent years. While Russian food tends toward simply prepared meat, potatoes and fresh fish, you'll find the quality and cafe atmosphere have improved, especially in the city's historic center. Grab bliny -- pancakes with filling -- for a quick snack, or stop in one of the tempting pastry shops on Nevsky Prospekt for a sweet treat.

In a Russian restaurant, you'll see a bewildering array of "salads" on the menu, many containing fish or meat; try the Salad Olivier, a dish similar to American potato salad that holds a special place in Russian hearts. For something different, try Georgian cuisine, what the Russians consider their "southern" food for its regional flavor. Russians are also fond of soup; if your tour included lunch, you'll nearly always find it served as your first course.

The Idiot Restaurant, named for the Dostoyevsky novel, is a favorite with St. Petersburg's expat and artsy crowd. It's known for its borscht and other vegetarian dishes, served in a quasi-Bohemian atmosphere in a cozy basement space. Wash it all down with a free shot of vodka. The staff speaks English. (82 Moika Canal, not too far from St. Isaac Square. Daily 11 a.m. to 1 a.m.)

Teplo is one of St. Petersburg's more popular restaurants. With outdoor seating and kitschy homestyle decor, it reminds you of an independent cafe you might see in a major American city. The potato pancakes -- which come with Buko cheese, red caviar and smoked salmon -- are delicious, as is the beef stroganoff made with mushrooms and veal. Reservations are recommended. (45 Bolshaya Morskaya Ulitsa, next to the Vladimir Nabokov Museum. Monday to Thursday 9 a.m. to midnight, Friday 9 a.m. to 1 a.m., Saturday 11 a.m. to 1 a.m., and Sunday 11 a.m. to midnight)

Sever is a legendary Soviet-era cake shop, where people used to line up for the brightly colored sweets. Do some drooling before you pick, although prices are reasonable enough that you might choose more than one. (44 Nevsky Prospekt. Daily 7 a.m. to 11 p.m.)

This is one of the few Baltic ports of call where we recommend that passengers take organized shore excursions, either through the ship or a licensed tour operator. Some lines now offer an "at your leisure" tour that gives you the visa, yet allows you time to go off on your own -- really, the best of both worlds. The only way that you can be truly independent is if you obtain a visa prior to your trip.

Hermitage: The world's second-largest art museum (behind the Louvre) is easily St. Petersburg's most famous attraction. The four buildings that make up the museum include the opulent Winter Palace, which was built by Peter the Great's daughter Elizabeth and has undergone major renovations that have left it sparkling. Walk up an imposing baroque marble staircase, marvel at all the gold leaf and check out the several heavily decorated rooms, including a throne room.

Your guide will tell you how the art-collecting began with Catherine the Great (although what she collected could only be viewed by royal eyes and invited guests). Today's art collection is in chronological order. On a recent visit, we started with names familiar to fans of the Ninja Turtles cartoon -- Leonardo (DaVinci), Raphael, Michelangelo. Next, we moved on to the Spanish collection (Velazquez, Goya and El Greco, to name a few).

While the Hermitage's Rembrandt collection is the second-biggest (after Amsterdam's Rijksmuseum), many of the more famous pieces have returned to Holland as part of the Hermitage Amsterdam. Still at the Hermitage is the "Danae," which may or may not actually be by Rembrandt but has a place in history for being slashed and burned with acid in 1985 by a madman. It took 12 years to restore the work.

Get there early to view the museum's famous Impressionist collection, put together by collectors in Moscow. Declared bourgeois by Stalin, the collection sat in warehouses until the end of World War II, when it was divided up between the Hermitage and the Museum of Modern Art in Moscow. Renoirs, van Goghs, Cezannes and Gauguins cover the walls in room after room, followed by a lot of Matisse and some Picasso, too.

Don't miss the fabulous gift shop, which is a great place to buy quality souvenirs. The museum offers a radio system where you can put on headphones and actually hear your guide despite the crowds. (Closed Monday; daily 10:30 a.m. to 6 p.m. except Wednesdays 10:30 a.m. to 9 p.m.)

St. Isaac's Cathedral: The biggest cathedral in St. Petersburg is an immense, awesome spectacle. It's not all that old -- it was completed in the mid-19th century -- but it's replete inside and out with gorgeous mosaic murals, granite pillars and marble floors. Its huge gold dome can be seen for miles around. (Closed Wednesday; Thursday to Tuesday 10:30 a.m. to 6 p.m., check for evening openings in summer)

Church of the Resurrection of the Christ: Also known as Savior on the Spilled Blood, the church gets its gruesome name from Emperor Alexander II, who was assassinated on this very spot in 1881. Modeled after St. Basil's Cathedral in Moscow, the onion-domed exterior immediately fulfills all your dreams of Russia; a photo op there is a must. Inside, there are 7,500 square meters of mosaics, all restored, as well as a shrine to the departed tsar. (Closed Wednesday; open Thursday to Monday 10:30 a.m. to 6 p.m.)

Russian Museum: This museum is housed in the former Mikhailovsky Palace and is one of two top places in all of Russia to experience the culture of the country, from 12th-century icons to the avant-garde. Don't miss the adjacent Mikhailovsky Gardens, a lovely spot to rest during a long day of sightseeing. (Closed Tuesday; Wednesday, Friday, Saturday and Sunday 10 a.m. to 6 p.m., Monday 10 a.m. to 8 p.m. and Thursday 10 a.m. to 9 p.m.)

Peter and Paul Fortress: This is where St. Petersburg began. Built in 1703, it was initially planned as a defense against Sweden, but the Russians won that war before the fortress was completed. It was used, until 1917, as a political prison instead. Many of the czars and other Russian royalty are buried there. Other highlights include the Baroque-style Cathedral of Saints Peter and Paul (open every day) and the Trubetskoy Bastion. (Fortress closed Wednesdays; open daily 10 a.m. to 6 p.m. daily except Tuesday 10 a.m. to 5 p.m.)

Peterhof: If you really want to see how the Romanovs lived, take a trip to some of their magnificent palaces, located outside the city proper. You can do them in a day (but just barely).

Peter the Great's Peterhof lies on the Baltic Sea, a magnificent landmark of Russian artistic culture of the 18th and 19th centuries, founded in the very beginning of the 18th century by Emperor Peter the Great. It's known as the Russian Versailles for its gorgeous fountain-laden grounds and elaborate interiors. Try to schedule your tour on a weekend, when all of the portions of the complex are open.

Catherine Palace: In Pushkin, Catherine Palace neighbors the palace of Pavlovsk, which was built for Russian Czar Paul I, the only son of Catherine the Great. Both were built in the mid- to late-18th century, have been beautifully restored and are situated among gorgeous parks and gardens. At Catherine Palace, don't miss the re-created Amber Room, which took 20 years and cost more than $12 million. (The original amber panels were stolen by Nazis during World War II and sent back to Germany, where they were never recovered.)

Cultural performances: St. Petersburg has long been a magnet for Russian musicians, composers and dancers, and its residents flock to its theaters (where they pay a much lower ticket price than visiting tourists). While the famed Mariinsky Theatre is the best known (the former Kirov Ballet is housed there), the city has enough venues and talented performers that your night out is bound to be special. If ballet isn't your thing, look for a folkloric show, such as "Feel Yourself Russian" at Nikolaevsky Palace.

Nevsky Prospekt: Those with visas should spend at least part of their time on  St. Petersburg's most famous street and the city's major commercial thoroughfare. Nevsky Prospekt is life in Russia on display, with street vendors and exclusive Western boutiques (ranging from Hugo Boss to Versace), cathedrals and parks, cafes and canals.

Nevsky Prospekt is also a good place to pick up edible and drinkable souvenirs (from caviar to vodka); among the handful of mini-markets. One warning to visitors: Despite the presence of pedestrian crossings, there is no such thing as "yield to pedestrians" in this city of frantic drivers; pay close attention to traffic, or cross the street through the underground pedestrian tunnels.

Canal boat ride: One fun diversion is a boat ride along the canals. There are several companies and several routes; the "Golden Ring" route is the most popular, giving views of many of the city's famous palaces. It's best to book tickets in advance, especially to make sure there's an English-language guide or audio.

Nightlife: If you're young, hip, trendy or daring, follow the crew to St. Petersburg's nightlife scene! Because of the city's exotic quality and the overnight in port, the stop in St. Petersburg is a big evening out for cruise travelers. Typically, cruise lines will organize ballet or folkloric excursions, but the city's got some fabulous nightclubs, too. A word of caution: Don't carry any valuables or too much extra cash.