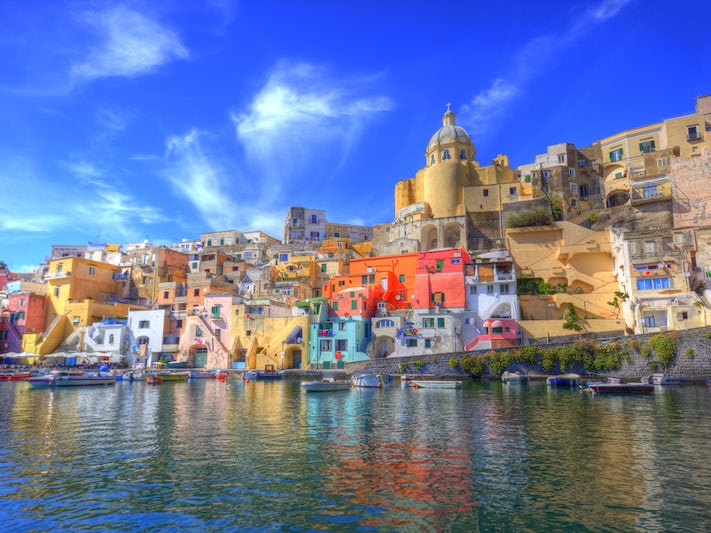 Popular Things to Do in Naples

Though there are many historically significant sights to see in the small town of Naples, Italy, the most stunning of which is the famous Mount Vesuvius, the giant active volcano that many of the city's suburban residences are actually built upon. Cruisers could book excursions to explore the looming Norman castle that overlooks the city, the fort known as Castel Sant'Elmo and other sights like the Gallerias Principe di Napoli, but many also book excursions to nearby destinations including Capri, Positano and Pompeii, among others. Just be sure to grab some Neapolitan-style pizza while you're in town.

Like most European destinations, Naples is busiest during the summer months. Cruisers who want to avoid the hot, sticky weather should consider visiting during the spring when the weather is much more comfortable and the streets are considerably less crowded. Italian is the official language in Naples, and it's best not to assume anyone will speak or understand English. The euro is the official currency.

Find Things to Do in Naples on Viator

Food and Drink in Naples

Naples is famous for its of three classic Italian staples: pizza, pasta and pomodoro (tomatoes). Its residents also enjoy great seafood from the Bay of Naples. Although there are some very expensive restaurants in the city, Neapolitan cuisine is essentially peasant food in origin.

Vegetables are served as antipasti, and desserts consist of basic dishes like baba (a small cake soaked in a liquor like rum), sfogliatelle (filled pastries in the shape of a shell) and zeppole (donuts). Mozzarella made with buffalo milk is the best of the local cheeses.

Neapolitans claim to have invented thin-crust pizza, and Antica Pizzeria Brandi is adamant that it invented pizza margherita, named in honor of Queen Margherita, wife of Umberto I. This is a good place to stop off while shopping and represents the full-on Neapolitan tourist experience. The house wine has a picture of Queen Margherita on the bottle. A photo of famed opera singer Luciano Pavarotti hangs inside the front door, and a guitarist is sometimes on hand strumming "O Sole Mio." Brandi also does pasta, but pizza is its forte. (Salita S. Anna di Palazzo 2; +39 081 416928; open Tuesday to Sunday 12:30 to 3:30 p.m. and 7:30 to 11:30 p.m.)

If you want to eat where the locals eat, try Ristaurantino dell'Avvocato, a relatively new enterprise by a former lawyer, Arcangelo Raffaele Cardillo, who is passionate about food and serves some splendid dishes. The menu is divided in two: pesce (fish) and terra (meat). It's a small, modern, tidy place. Book ahead if you can. (Via Santalucia 115; +39 081 032 0047; open Tuesday to Saturday noon to 11 p.m., Sunday and Monday noon to 3 p.m.)

In the historic center, Pizzeria Di Matteo can claim that President Bill Clinton ate there during the G7 Summit in 1993. It's a solid traditional pizzeria set among Naples' old food markets. (Via dei Tribunali 94; +39 081 455262; open 9 a.m. to midnight, closed Sundays and two weeks in August)

Along the waterfront by Castel dell'Ova and just across the road from Grand Hotel Vesuvio are a cluster of excellent seafood restaurants around what was once a harbor for fishing boats. Try Zi Teresa (Via Borgo Marinari 1; +39 081 764 2565; closed Mondays) with its great view of the Castel dell'Ova (so named because the poet Virgil is supposed to have buried an egg underneath it). La Scialua (Borgo Marinari Banchina 1; +39 081 764 5333; closed Mondays) and Ristorante Circo (Borgo Marinari 29/30; +39 081 764 6006; closed Wednesdays for lunch but open for dinner) are equally good. For an aperitif, ask directions from any of these three to Nase Cane, a hole-in-the-wall bar that belongs to the descendants of the original Nase Cane, a Neapolitan fisherman with a very small nose, resembling a dog's snout (nase cane), hence his nickname and that of the bar.

Limoncello is a favorite drink of the area. The strong Italian liqueur is derived from the bright, plump lemons that prosper in the southern part of the country. Actor Danny DeVito bought a lemon farm near Sorrento so he could produce his own. Bartenders have experimented with cocktails like the Limoncello Mojito.

Pompeii is one of the most important historic sites in Italy. It is thanks to Pompeii and nearby Herculaneum that we know so much about everyday life in the Roman world. Until 79 A.D., Pompeii was a prosperous city with 20,000 residents. The eruption of Vesuvius that year buried the town, preserving buildings, pottery, mosaics and even the remains of Pompeiians for more than 1,700 years. The city of Pompeii was rediscovered in the mid-18th century as a result of excavations bankrolled by the king of Naples. Today, visitors can wander the streets of this ancient, doomed city. Sites of interest include several temples and bath houses, the open-air forum, the plaster casts of Pompeiians who collapsed and died in the streets, plus many houses and small shops. There is even a brothel with 10 rooms and stone beds. (+39 081 857 5111 ; open November to March daily from 8:30 a.m. to 5 p.m., last admission 2:30 p.m., and April to October daily from 8:30 a.m. to 7:30 p.m., last admission 6 p.m.)

The sea port of Herculaneum was also destroyed during the eruption of Mount Vesuvius. This smaller town of about 5,000 inhabitants has only been partially excavated, but more everyday objects have been left "in situ." Houses still contain carbonized doors and wooden beams, furniture and papyrus scrolls. (Open April to October daily from 8:30 a.m. to 7:30 p.m., November to March from 8:30 a.m. to 5 p.m.)

Take a bus ride up to Vesuvius itself. Eavbus departs every day from 9 a.m. to 10:15 a.m. from Piazza Piedigrotta (the last departure from Mount Vesuvius is at 2 p.m.) It takes 90 minutes from Naples to the crater (1,000 meters above sea level). You hike the last section along a slippery path across volcanic rocks.

The museum also features a world-class collection of classical sculpture, Egyptian antiquities, paintings, murals and mosaics. This is one of the few attractions where a cab from the ship is the best bet; plan to pay about 15 euros each way. (Piazza Museo 19; +39 081 442 2149; open Wednesday to Monday from 9 a.m. to 7:30 p.m.)

Other historic sites in the city include the 13th-century Castel Nuovo (Piazza Municipio; +39 081 795 7722; open Monday to Saturday 9 a.m. to 7 p.m.), which can be admired for its white marble triumphal arch, and the Palazzo Reale di Capodimonte (Via Miano 2; +39 081 749 9111; open Thursday to Tuesday from 8:30 a.m. to 7:30 p.m.), which is an 18th-century palace built by the Bourbons when they wanted to make Naples a powerful and impressive kingdom. This hilltop palace features splendid ballrooms and bedrooms and is also the location for an excellent collection of Renaissance art, including works by Da Vinci, Michelangelo and Raphael.

Shopping in Naples is a favorite pastime. The city's retail hub is a relatively easy 10-minute walk from the Stazione Marittima. Head past Castel Nuovo and up to Via Chiaia, a (mostly) pedestrian street lined with shops and bars. Via Chiaia, Piazza dei Martiri and Via Calabritto are the best places to browse if you are looking for the big-name Italian designers -- Prada, Armani, Gucci, Ferragamo. Also, don't miss poking around the designer shops on Via Carlo Poerio.

Librerie Feltrinelli (Via Santa Caterina a Chiaia 23; +39 081 240 5411) is a huge, multilevel bookstore that is part of a well-known Italian chain. The shop has books in English as well as Italian and is good for introductions to Italian art and culture.

Right around the corner is Vinarium (Vicolo S. Maria Cappella Vecchia 7; +39 081 764 4114), a workman-like wine bar-cum-shop that specializes in wines from Campania (Naples is part of this region) and also Sicilian wines. Many of these vintages are made by small producers that you'll not find outside of southern Italy.

Marinella (see Souvenirs) is at the bottom of Via Calabritto. Marinella's main competitor is Ulturalecravatte (Via Carlo Poerio 115; +39 081 248 1151,), which is a new company making ties with lucky charms sewn inside them. (Neapolitans are very superstitious.) Lello Pagnotta (Via Carlo Poerio 96; +39 081 7646995;) is a remarkably inventive furrier who makes fur stoles that can double as handbags and even fur finger-rings.

The island of Capri, just across the Bay of Naples, is the St. Tropez of Italy, much visited by the stars of Hollywood and Italian cinema in the '50s and '60s. It was also visited by writer Oscar Wilde after his imprisonment. One hotel threw him out after the guests petitioned for him to leave, but another took him in and erected a plaque to commemorate its kindness. Capri also is a great place to shop if you have a serious amount of money.

Less costly is a local boat trip to the Blue Grotto (regular departures daily from 9 a.m. throughout the day, from Marina Grande). Also, check out Villa San Michele, an 18th-century home of a Swedish physician with lovely furnishings, great art and some gorgeous gardens. (Via Axel Munthe 34, Anacapri; +39 081 837 1401; open daily from 9 a.m. to 6 p.m.)

To get to Capri or the neighboring island of Ischia, head across the cruise terminal to the hydrofoil station. The trip across the Bay of Naples takes 50 to 90 minutes each way.

Whether by shore excursion or hired driver, head to Sorrento, the "capital" of the gorgeous Amalfi coast. (Some ships actually call at Sorrento, but stops there are highly unpredictable, particularly if weather is blustery.) This is a grand resort with superb old-world hotels on the top of its cliffs but also narrow Roman streets behind. Galleria Russo (Via Tasso 43; +39 081 878 1748) is an art gallery that is well worth visiting for genuine local paintings. Beyond Sorrento, the roads get very slow, but foodies should head for Don Alfonso 1890, which is said to be the best restaurant in Italy (Sant'Agata Sui Due Golfi; +39 081 878 0026). Positano, Amalfi and Ravello are all wonderful -- but be sure you can get back to the ship in time.