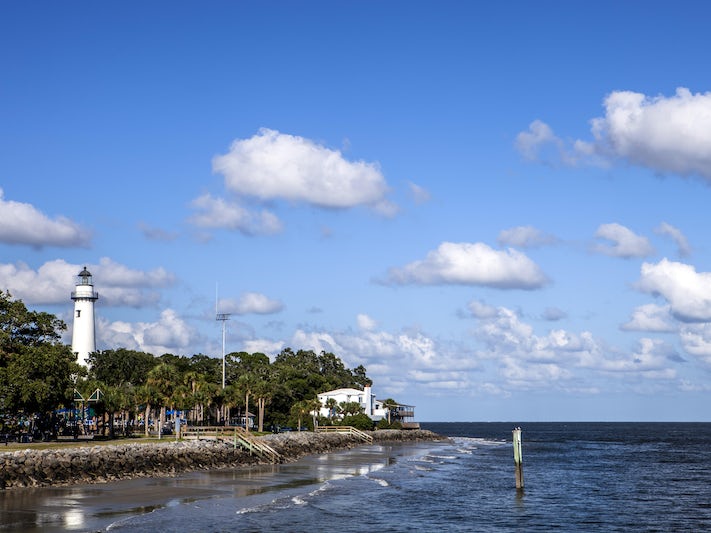 Find Things to Do in St. Simons Island on Viator

Popular Things to Do in St. Simons Island

Trolley Tours: If it's a hot day or you just don't know where to begin your exploration, hop on the St. Simons Trolley for a guided tram tour of the 240 acres that comprise the historic district (board at St. Simons Fishing Pier; 912-638-3333; daily tours depart at 11 a.m. and 1 p.m. from April through August and 11 a.m. from September through March). Tours last between 90 minutes and two hours.

Bloody Marsh Battle Site: Anyone who appreciates history should visit this battle site off Old Demere Road (912-638-3639; open daily 8:30 a.m. to 4 p.m. except for Thanksgiving, Christmas Day and New Year's Day). It's here on July 7, 1742, that an outnumbered force of English troops trounced the Spanish whose goal was the taking of Fort Frederica. Britain's victory was so decisive that it turned the tide and Spain never again encroached onto Georgia territory. Today the site is part of the Fort Frederica National Monument and is managed by the National Park Service. You'll find markers and information panels that tell the story of the battle.

Christ Church, Frederica: John and Charles Wesley planted the Christ Church, Frederica at the north end of St. Simons Island and preached there before returning to England to found the Methodist Church. The tranquil setting for Christ Church -- an open lawn dotted with massive live oaks, cedar and holly trees -- is stunning. Built in 1820, Union troops partially destroyed this house of worship during the Civil War. In 1884 Reverend Anson Phelps Doge, Jr. built the church that stands on the grounds today. Visitors are especially enthralled by the stained glass windows; one designed in 1899 by Mayer & Company of Munich, Germany, and another window that is credited to Louis Tiffany. You'll also find a cemetery onsite with the graves of early settlers and some famous Georgians, like novelist Eugenia Price. (6329 Frederica Road; 912-638-8683; open Tuesday to Sunday, 2 to 5 p.m. except Christmas and Easter)

St. Simons Lighthouse Museum: Even though the St. Simons Lighthouse is operational, you can still climb to the top if you can handle the 129 steps. James Gould, a Massachusetts native that became the first lighthouse keeper, built the original lighthouse in 1810. Confederate forces smashed the structure in 1862 and the current lighthouse was built 10 years later as a charming Victorian design made of red brick. Today you can ascend the lighthouse, visit the museum and stroll through the gift shop. (610 Beachview Drive; 912-638-4666; open Monday to Saturday, 10 a.m. to 5 p.m.; Sunday, 1:30 to 5 p.m. with the exception of major holidays)

St. Simons Island Trail System: Rent a bike and explore more than 30 miles of pathways that will lead you around the island. If you stick to Frederica Road, you'll find the Sea Palms Golf Course, some shopping areas and plenty of restaurants to stop at for a meal or snack. Alternatively, you can visit the south end of the island and Pier Village. There are a variety of bike rental shops located throughout the island, including Monkeywrench Bicycles (1708 Frederica Road; 912-634-5551; open daily, 10 a.m. to 6 p.m.) and Ocean Motion Surf Company (1300 Ocean Boulevard; 912-638-5225; open daily, 9:30 a.m. to 6 p.m.).

Hit the Beach: Locals and visitors will tell you that all of the island's beaches are gorgeous, but the most sought-after location is at the U.S. Coast Guard Station (First Street Beach Access; 912-638-4666), which also houses the Maritime Museum. The station and museum are closed until 2018 for renovations, but you can still visit the beach, which has a shaded picnic area, restrooms and showers.

St. Simons Island Pier: Whether you plan to go fishing or crabbing or just want to commemorate your visit with photographs, the St. Simons Island Pier (Pier Village at the end of Mallery Street) is the place to be. There is an onsite bait and tackle shop. And, if you visit between December and March, you just might spy a North Atlantic right whale from the pier.

Search for Tree Spirits: In the 1980s an artist named Keith Jennings painstakingly carved eerie faces in 20 of the island's oak trees. The faces eulogize all the sailors lost at sea in ships made of St. Simons oak. Stop by the Welcome Center (Brunswick on I-95 between exits 42 and 38; 912-264-0202) to get a map for your search party.