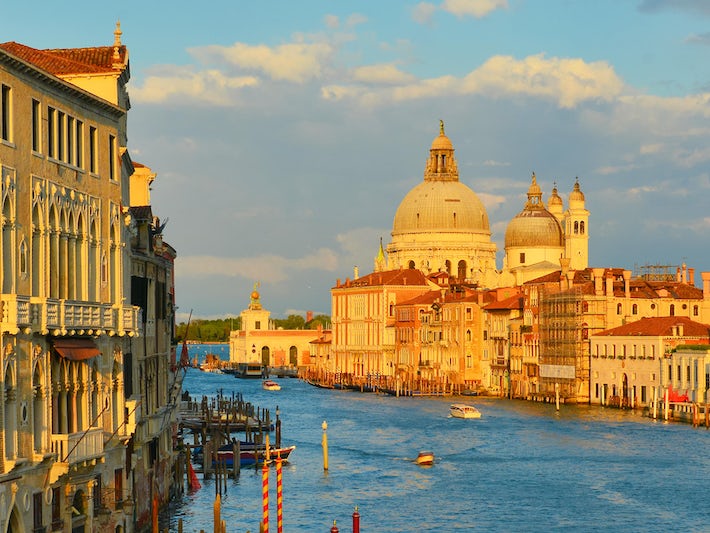 Popular Things to Do in Venice

Venice and its legendary canals and winding streets are the things of which dreams are made. Though a smallish city, Venice is inimitable with a culture and history so deep and rich that its identity endures today, even while tourism rules. Cruisers will need plenty of time to explore, whether taking a shore excursion to ride a gondola on the Grand Canal, visiting museums like Doge's Palace and historic churches like the Basilica di San Marco, people-watching in the piazzas or simply strolling the streets to shop, eat and peruse the beautiful homes. For a unique-to-Venice souvenir, pick up some authentic Murano glass.

Peak travel season in Venice is during the summer, when it's actually quite hot and humid. The fall and spring months are much less crowded and temperatures are much more comfortable. Venetians speak their own Italian dialect known as Veneziano, and few speak English. The currency in Italy is the euro.

Find Things to Do in Venice on Viator

Food and Drink in Venice

At lunchtime, eat at the poolside restaurant at Hotel Cipriani on Giudecca. For dinner, try the Cip's Club, an outdoor pizzeria-grill with tables that sit on a deck right on the lagoon. Tip: Reservations for the Cip's Club absolutely need to be made in advance.

There's also a branch of the famed Harry's on Giudecca. While it's breathtakingly expensive (pasta entrees start at 34 euros), the food is marvelous, the ambience is authentically Venetian, and fellow diners, more or less, are all locals.

Ristoteca Oniga is a small, cozy place at Campo Barnaba whose cooking philosophy is part of the Slow Food movement that's growing in Italy -- and even in America. It subscribes to the theory that you should take your time and rediscover your tastebuds. The restaurant, packed with locals rather than tourists and featuring an all-Italian menu that refuses to condescend to those who won't learn Italian, is a refreshing change.

Piazza San Marco: According to Napoleon, this gracious plaza was Europe's first drawing room. It's a huge piazza surrounded by the Basilica di San Marco, the Torre dell'Orologio clock tower and the arcade of Procuratie Vecchie and Nuove. The Basilica is the primary tourist attraction; plan to wait in line during high season. It dates back to 1094 and represents a range of architectural styles, such as Byzantine, Romanesque and Renaissance. (Note: You will be denied entry to this and many other Italian churches if your attire is deemed inappropriate -- be sure your knees and shoulders are covered.)

Also check out the Bell Tower, a 324-foot structure originally built in the 10th century. It had to be rebuilt early in the 20th century when it completely collapsed. Climb to the top for a great city view. Almost as much of a Piazza tradition is a visit to one of the square's two famous cafes -- Caffe Florian and Gran Caffe Ristorante Quadri. Their outside tables offer fabulous people-watching; just be prepared for the stiff prices. Incidentally, San Marco is as big an attraction for pigeons as it is for people -- you may want to wear a hat.

Art galleries abound. The best-known include Gallerie dell' Accademia (Boat Line 82 to Accademia), featuring Venetian art from the 14th to 18th centuries and the Peggy Guggenheim Collection (Palazzo Venier dei Leoni, 701 Dorsoduro) for contemporary masterpieces and sculpture. Guggenheim was an American who resided in the Palazzo; she and her dogs are buried out back in the sculpture garden. The Scuola Grande di San Rocco (S. Rocco, Frari) features the work of Venetian artist Tintoretto.

The Grand Canal: The Venetian equivalent of a superhighway, this S-shaped canal runs through the heart of the city. It offers fabulous views of palazzos that date back to the 12th century and line the waterway. The best way to traverse the Grand Canal is via vaporetto, line #1. The Grand Canal also divides the city in a way; the east side contains most of the best-known tourist attractions (San Marco Square, et al.), while the western part is generally more residential, boasting wonderful trattorias and local shops. Pedestrians can cross over the canal in just three places: Rialto Bridge, Accademia Bridge and Scalzi Bridge.

A gondola ride: Yes, it's the ultimate touristy thing to do, but it's also incredibly romantic (particularly at sunset). And it also offers a different perspective of Venice -- from the water, along tiny canals, where vaporetti cannot go. Gondolas typically take anywhere from two to six people, and you pay per trip, not per person. The ride lasts anywhere from 30 to 50 minutes. Negotiate the rate before you get in, and plan to shell out about 80 euro.

First-timers who are interested in glass-making should trek to the island of Murano. (Boats run on a regular schedule from San Marco Square -- #7 is an express bus operated for tourists that runs every 20 minutes during the day.) There are numerous stops on Murano; the most central is Corinna. You can see the process and technique of glass-making, at several factories and there are numerous art galleries that specialize in glass. (In fact, that's pretty much the only type of retailer you'll find!) Although you don't have to go to Murano to buy glass designed by Murano and other artisans (numerous shops and galleries sell it), for the best selection -- from traditional to quite contemporary pieces -- you really should venture to the island.

A bit farther afield is the charming island village of Burano, known for its brightly colored houses and its exquisite handmade lace. (Note: These days, not all lace for sale there is made locally; be sure to ask before buying.) A Lace Museum (Museo del Merletto) is there if you want to learn a bit more about the art and history of lace-making. And don't worry if your cruise won't take you to Pisa -- Burano's campanile, or bell tower, has its own distinct tilt.

Giudecca, an island facing Venice (so you get gorgeous views), is where wealthy Venetians built their residences and where many locals have settled, as Venice itself has become tourist-clogged and expensive. Check out Chiesa del Redentore, built in the 16th century. The highlight of Giudecca for foodies is a meal at the fabulous Hotel Cipriani. (The hotel offers a free water shuttle from San Marco Square.)

The Lido, serviced by the vaporetti and fronting both the Venice Lagoon and the Adriatic sea, is Venice's beach island. It's a great place to escape the summer heat.

Take a gondola lesson in Venice -- If you're looking for a connection to a local's Venice try The Venetian Club. It aims to introduce small groups of travelers to local arts and recreation. Why not try to pilot your own gondola? On a recent trip there, a two-hour lesson on rowing -- Venetian style -- offered not just a great excuse to get out on the water but also an introduction into a distinctive local tradition.