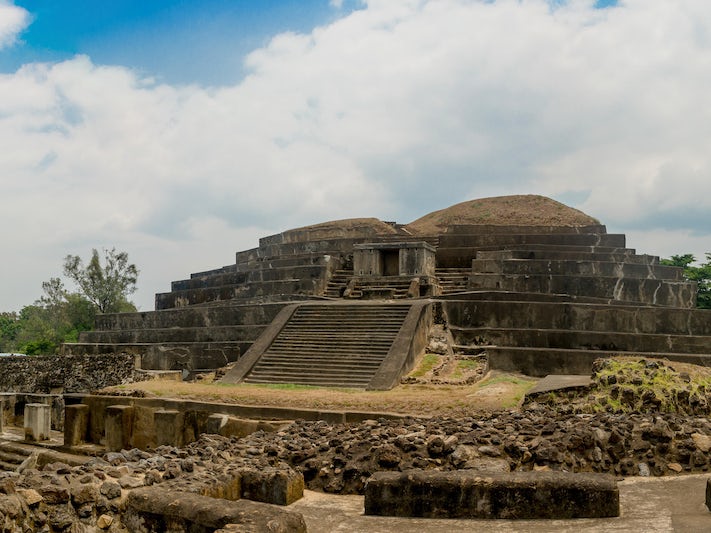 Find Things to Do in Acajutla on Viator

Popular Things to Do in Acajutla

Food and Drink in Acajutla

El Salvadoran cuisine is a mix of Mayan and Spanish influences, so lots of corn, beans and pork. The national dish is the pupusa, which is a soft corn tortilla stuffed with a variety of ingredients. Most typically, the stuffing is cheese, beans and a ground pork paste called chicharron; vegetarian options are available as well. You can get a pupusa at the small craft market near the port.

Acajutla Restaurante: This local spot is the only restaurant in the area that guides recommend to visitors. The seafood is fresh, waiters are friendly, menus are in English, and the prices are fair. You'll need to take a taxi to get to the restaurant and arrange for the taxi driver to stick around or come back for you. (Avenida Miramar; 503-24524375)

El Salvador's national drink is the guaro sour, which is rarely drunk straight. If you want to give it a try, go for a Cacique Guaro, which mixes the sour liquor with fruit juice or a soda.

Easiest to Get to: Bearing the same name as the port, Acajutla Beach is a small stretch of sand located within the grounds of the port complex. A courtesy shuttle takes cruisers from their ship to the beach and back, and runs every 20 to 30 minutes. There's nothing onsite except bathrooms, so you'll want to bring a bottle of water with you.

Where the Locals Go: If you want a more authentic beach experience, you'll need to go beyond the confines of the port. One of the most popular choices is Los Cabanos Beach, where you'll find a long stretch of white sand and reefs for snorkeling (bring your own mask). As with anything you want to do outside of the port, you'll need to arrange for a taxi driver to take you there and bring you back.

Cerro Verde National Park: Learn more about some of El Salvador's most active volcanos at this national park, located on the site of an inactive volcano some 6,500 feet above sea level. (Wear long pants as it gets pretty chilly up there.) During a 40-minute walk you'll get great views of the Izalco Volcano, which formed in 1770, last erupted in 1966 and still belches smoke today. It has a perfect cone shape with the top completely void of vegetation. (Independent cruisers can book a three- to four-hour hike to the top of the volcano through a local tour operator.) A second volcano you'll see is Ilamatepec (or Santa Ana); it erupted more recently in 2005. Another highlight of the walk is the stunning view of Coatepeque Lake, which was a runner-up for the eighth wonder of the world. Cerro Verde National Park is located about 45 minutes from the port. (Open daily, 8 a.m. to 5 p.m.)

Ruta de Maya Translating to "Mayan route," this is a stretch of archaeological sites that include Joya de Ceren, Tazumal, Casa Blanca and San Andres.

Joya de Ceren: The remains of this small village were declared a UNESCO World Heritage Site in 1993. Covered by the Loma Caldera Volcano explosion in 200 A.D., Joya de Ceren is often compared to Pompeii because many of the structures and everyday items used by the inhabitants were preserved by the volcano's ash. (No bodies were preserved, unlike at Pompeii.) A small onsite museum exhibits many of the items found, giving visitors a glimpse into pre-Hispanic Mesoamerican life. (Open Tuesday to Sunday, 9 a.m. to 4 p.m.)

Tazumal: The ruins at Tazumal, the tallest ancient structure in El Salvador, are located in the city of Chalchuapa. The small complex, which is surrounded by the city's business district, comprises the 75-foot-high Tazumal pyramid, which dates back to 1,500 B.C.E., as well as a handful of other structures including the remains of tombs and a ball court, and an archaeological museum full of artifacts and recovered relics. The importance of Tazumal to the El Salvadoran people cannot be understated; the pyramid is featured as the background image of ID cars and is a national symbol for the country.  (Open Tuesday to Sunday, 9 a.m. to 4 p.m.)

Casa Blanca Archaeological Park: Located close to Tazumal, this assemblage of Mayan ruins is composed of several pyramids that date from 500 B.C.E. through 900 A.D., the most well-known of which is El Trapiche, a rounded pyramid. (Open Tuesday to Sunday, 9 a.m. to 4 p.m.)

Archaeological Park of San Andres: Yet another grouping of Mayan ruins, San Andres was an active center of Mayan government and religion from 600 to 900 A.D. Visitors to the site can climb small pyramids, see where indigo was originally produced in the 17th century, and visit the small onsite museum. (Open Tuesday to Sunday, 9 a.m. to 4 p.m.)

El Imposible National Park: El Salvador's largest natural protected area, El Impossible National Park is home to a diverse range of wildlife including wild boars, pumas, haws and eagles. An onsite museum offers a brief history of the park and the wildlife that lives there.

Ataco: The town of Ataco is the biggest producer of coffee in El Salvador. A visit to one of the plantations here offers cruisers a glimpse into the history of coffee making, culminating in a delicious cup of joe. The town itself is a colorful place where weavers using giant looms still practice traditions handed down from their ancestors.