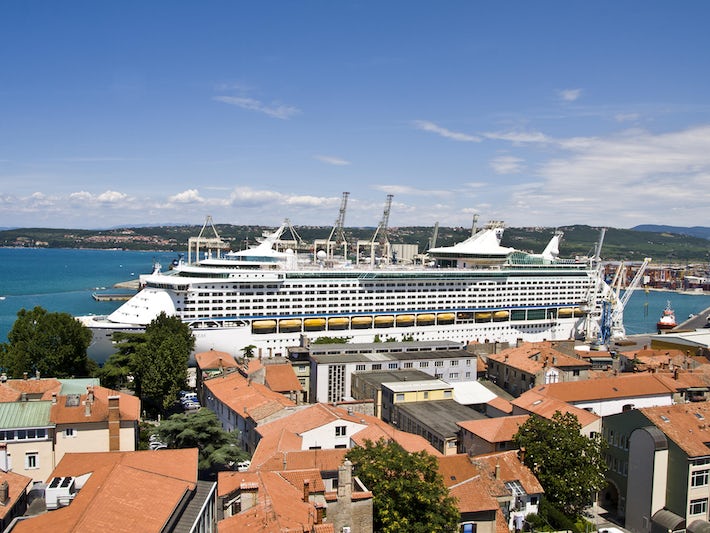 Find Things to Do in Koper on Viator

Popular Things to Do in Koper

Food and Drink in Koper

If you've spent time in Italy, many dishes you'll encounter in Koper may seem similar -- minestrone soup, for example. But because Slovenia changed hands so much through the ages, you'll also find other influences, like Hungarian goulash or Ottoman kebabs and burek, round, flaky pastries with savory fillings.

Fish and seafood are popular, as is the use of local olive oil and pumpkin seed oil. Pastas and risotto make an appearance, too. But there are also hearty traditional dishes: stews, grilled meats and sausages that might make cruise food seem light by comparison. Traditional vegetarian dishes include struklji (dumplings) with vegetable fillings and zganci, which is like a fine-grained polenta but made from corn, wheat or buckwheat. You'll also find potatoes served with many main courses.

The national dessert is prekmurje gibanica, an eight-layered cake with poppy seeds, walnuts, apples, raisins and ricotta fillings. You might also encounter smorn, a large, thick pancake that's chopped up while still in the skillet and served with fruit sauce; it's a popular street food.

Wash your meal down with local wines, including whites, Rebula and Malvasia (Malvazija), or reds, Refosco (Refosk) and Teran. Slovenia has more than 28,000 wineries and at least 52 varieties of vines -- so you're sure to find something to your taste!

Loggia Caffe Kaverna: This is a great place to relax and take in the scene on Old Town's historic main square with a cappuccino or glass of wine. The stone loggia is cool in the summer, and snacks include panini (Italian-style sandwiches), as well as savory and sweet pastries (Titov Trg; 386 5673 2689; open daily, 9 a.m. to 10 p.m.)

Okrepcevalnica Istrska Klet "Slavcek": This little Old Town hideaway, located below the 18th-century Carli Palace, offers Istrian home cooking, including bean soup with sausage or ham, fish soup, goulash, Trieste-style tripe, grilled meats, and squid, sardines or anchovies. The stick-to-your-ribs food is tasty and reasonable, while the atmosphere is like traveling back in time (in a good way!). (39 Zupanciceva Ulica; 386 5627 6729; Sunday to Friday, 8 a.m. to 10 p.m.)

Capra: For cuisine and decor that's thoroughly modern, head to this restaurant near the small-craft marina. Its large outdoor space is perfect for sunny days, and the menu abounds with fresh seafood, including octopus, fried sardines, tuna carpaccio, pasta with scampi, and lasagna with shrimp, porcini and truffles. Meat eaters will find veal steak, beef tagliata (sliced, marinated steak) and creative burgers, like one smothered in Brie and grated truffles. Dishes are colorful and artfully plated, but the real works of art are the desserts, which are almost too beautiful to eat (but do devour them!). As an added bonus, much of the produce comes from the restaurant's own farm. Reservations recommended, particularly on weekends (3 Pristanishka Ulica; 386 4160 2030; open daily, 9 a.m. to 10 p.m.)

Gostilna "Za Gradom" Rodica: Located about a 10-minute drive from the port, this exceptional restaurant serves ever-changing, prix-fixe menus bursting with creativity and fresh flavors. Along with every dish, you get a story from the owner, Darko Rodica, who speaks several languages -- but is definitely fluent in food! The emphasis is on seafood and seasonal ingredients, including octopus, crab, razor clams and scallops. Expect surprises, like a plate that arrives enveloped in fog. The decor is pleasant, but far less elegant than the food, which holds center stage. Reserve well in advance. (10 Kraljeva Ulica; 386 5628 5505; open Tuesday to Saturday, 8 a.m. to 11 p.m.)

Best Nearby Beach: Walk along the coastal street, Kopalisko Nabrezje, to your right from the port. Less than a quarter-mile later, you'll arrive at pebbly Koper City Beach (Mestno Kopalisce Koper), which has a cordoned-off swimming area. It's backed by a grassy park and has several cafes with outdoor seating.

Best Resort Beach: Located about 20 minutes southwest of Koper by car, 30 minutes by bus, Portorose (Portoroz) Beach is Slovenia's most popular seaside spot. The swath of sand is lined with resorts, shops, cafes and restaurants, creating a lively scene and making it the top spot to take a dip in the Adriatic.

Praetorian Palace: A 15th-century structure, easily recognizable by its crenellated facade and carvings of the Venetian winged lion of St. Mark, this palace now contains an excellent tourist office, with plenty of brochures and booklets about Slovenia and the area around Koper. The building also serves as town hall, and you can take a guided tour of the building by inquiring at the tourist office. The building has been somewhat modernized, so the interior may be a bit disappointing, compared to the exterior. The tour visits the mayor's office, a reception room and city council chambers, with a large mosaic of Koper's symbol, a sun with a face. In the various rooms, you'll see painted rafters and decorated ceilings, Venetian chandeliers and some furnishings from a medieval pharmacy. (Tourism Office, Titov Trg; 386 5664 6403; open daily, October to May, 9 a.m. to 5 p.m.; and June to September, 9 a.m. to 8 p.m.)

Cathedral of St. Mary's Assumption: The cathedral's religious history dates to the sixth century, but the current facade combines Gothic and Renaissance styles. Its greatest treasure is the painting "Madonna with Child on the Throne and Saints," by Vittore Carpaccio, painted in 1516. You'll find this large masterpiece on the right side of the church's interior. Carpaccio also decorated the organ with two paintings, "The Presentation in the Temple" and "The Slaughter of the Innocents." Koper's patron saint, St. Nazarius rests here, too, in a 15th-century stone sarcophagus. Near the cathedral's left exterior, there's an even older structure, the Rotunda of Mary's Assumption (no entry), which was used as a baptistery. You'll find a number of historic churches in Koper; visit the tourism office if you're interested in seeing others. (Titov Trg; 386 5627 3173; open daily, except during mass.)

Bell Tower: The city bell tower, next to the cathedral, was originally a fortified Romanesque structure. It was converted into a bell tower between the 15th and 17th centuries. If you're willing to climb 205 steps, you'll get a wonderful panoramic view of the city and the Gulf of Koper. (Titov Trg; hours vary.)

The Foresteria and Armeria: On the opposite side of Tito Square from the cathedral, these historic buildings date to the 15th and 16th centuries. The Foresteria provided accommodations for the podesta's guests. Note the lovely stone Renaissance doorframe, the Porta del Corte. Next to it, the Armeria, was used for weapon storage until 1550. The buildings are now owned by a university. (No entry.)

Loggia: A 15th-century Venetian-style loggia (remodeled in the 17th century) completes the square. It's housed a coffeehouse since the 19th century. Note the terracotta statue of the Madonna and Child on the corner of the building; it commemorates the devastating plague of 1554.

Entrance to Cevljarska Ulica: An arched portico between the wings of the Praetorian Palace leads to Old Town's prime shopping street. As you pass through, look to your right for the stone plaque with writing and a small, oval opening cut into it. In times past, this is where you could insert a piece of paper denouncing someone in the town. Fortunately, the practice has been discontinued!

Walking Tour of Old Town: After exploring Tito Square, head through the portico to Cevljarska Ulica, which has interesting small shops to browse. Turn left on Zupanciciva Ulica (Piranske Soline salt shop is on the corner where you turn). Check out the wild, handmade shoes in Tash, a shoemaker's shop, along the way. You'll soon arrive in Preseren Square, home to Da Ponte Fountain, built in 1666 and modeled after the Rialto Bridge in Venice. Keep going toward the large archway at the end of the square. This is the Muda Gate, built in 1516, where tolls were once collected for entering the city. It's the only preserved city gate out of an original 12. Walk through it, noting the heraldic decorations. You're now at the ring road, which was once water separating Koper from the mainland. Walk along it to your right, for about five minutes, until you reach the water. Just before the water, on the opposite side of the street, there's a large farmers market (open from about 6:30 a.m. until midday). Wander along the lovely seaside promenade, bordering the small-craft marina until you reach an old stone building with a series of arches. This is the 15th-century salt warehouse. Walk through the open arches and into Carpaccio Square, which was once a fish market. On one corner of the square stands gothic Carpaccio's house, now home to a small multimedia exhibit about the painter's work, worth a visit only if you're a fan, since the interior has been completely remodeled (Carpacciov Trg 6; 386 4155 6644; open Wednesday and Thursday, 8 a.m. to 4 p.m.; Friday to Sunday, 8 a.m. to 6 p.m.; combined ticket with the Koper Regional Museum). Keep walking along the water until you reach the cruise terminal, or continue through the far side of the square to Kidriciva Ulica, where there are some medieval houses with multicolored facades, as well as the Koper Regional Museum, which traces cultural heritage through artifacts, paintings, sculpture, weapons, clothing and decorative arts. It's located in the splendid Belgramoni-Tacco Palace. (19 Kidriciva Ulica; 386 4155 6644; open Tuesday to Friday, 8 a.m. to 4 p.m.; Saturday to Sunday, 10 a.m. to 4 p.m.; additional hours May to August, Saturday, 6 p.m. to 9 p.m.)

Predjama Castle: About 15 minutes from Postojnska Cave (and often combined in a shore excursion), this looming Renaissance castle built into the mouth of a cave perched on a 400-foot cliff is also a big draw. You can tour the armory, filled with weapons, and visit renovated rooms -- in addition to getting some great views. (Predjama; 386 5700 0100; open year-round, with tour hours that vary depending on season; in summer months there is a free shuttle bus between the castle and Postojnska Cave; combined tickets are also available.)