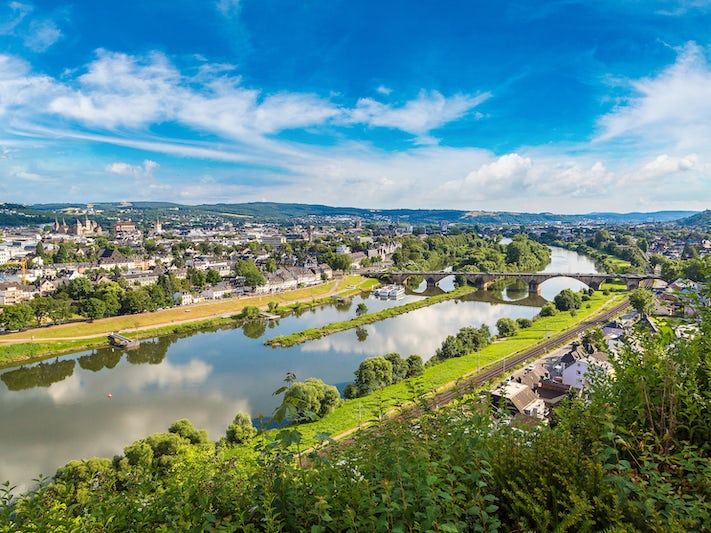 Find Things to Do in Trier on Viator

Popular Things to Do in Trier

Porta Nigra: Located right next to the tourist office, the Black Gate was once part of the Roman wall that surrounded the city and is today the largest Roman city gate north of the Alps. Built in the second century, it is one of many Roman ruins scattered throughout the city, and is a mainstay on any walking tour. The gate, including the upper floors, is open to visitors.

Constantine Basilica: One of the most impressive Roman architectural relics in Trier, the basilica, located right in the heart of the city, was built by the emperor Constantine around 310 AD as his imperial throne room -- a "room" that measures 239 feet long, 93 feet wide and 103 feet high, boasting the second largest Roman interior in existence. Today the structure is used as the city's Protestant Church. It's free to go visit. Right next door is the city's archaeological museum (called the Landesmuseum).

Trier Cathedral: Though the foundation of the Trier Cathedral date back to 336, the present building was built in 1035, making it the oldest cathedral in Germany. Mostly Gothic in style (thanks to a 13th-century remodeling), visitors will also find Baroque tombs (there are four archbishops buried inside) and altars.

Karl Marx House: The father of modern communism was born in this 18th-century home in 1918, though he actually grew up across town. Today the house serves as a three-floor museum detailing Marx's origins, family, career and time in exile, as well as his writings, their influence on the rise of socialism and the history of communism in Europe and beyond. Signage is in German but an audio guide (included in the entrance fee) provides plenty of context for the exhibits.

Amphitheater: A bit off the beaten track (you'll probably want to take a taxi), the Roman amphitheater in Trier, which seated some 20,000 people, is the oldest Roman site in the city, dating back to 100 CE. It, along with several other Roman-era archaeological sites in Trier, is part of the Trier UNESCO World Heritage Site. Visitors can enter the arena, walk along seating tiers and go into rooms beneath the arena where animals were kept penned up before being released to battle the gladiators.