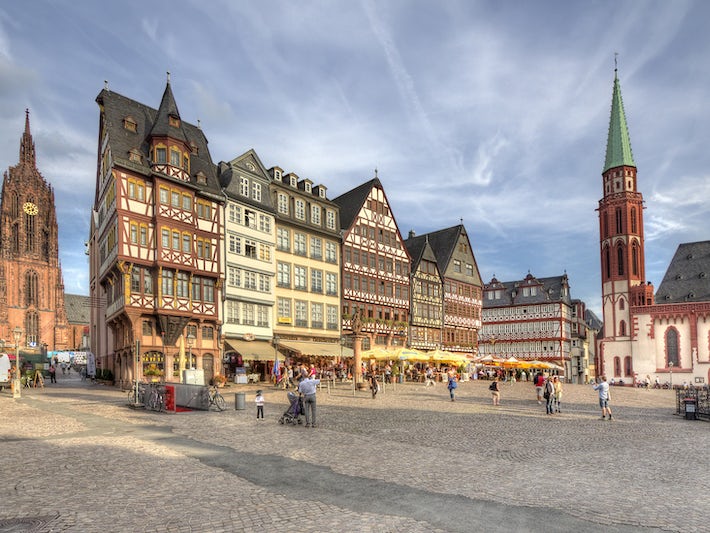 Find Things to Do in Frankfurt on Viator

Popular Things to Do in Frankfurt

Food and Drink in Frankfurt

Where would the frankfurter be without Frankfurt? Yes, the local sausage here inspired that American favorite, the hotdog. So by all means, pay homage. Here, they're all-pork, a bit longer and lightly smoked; they're usually served with brown bread and mustard, so don't expect a bun. Other typical dishes include grune sosse (green sauce), made from seven different herbs, oil, vinegar, sour cream and yogurt, and served with hard-boiled eggs and boiled potatoes; handkas mit music (cheese marinated in oil, vinegar, onions and caraway seeds) and rippchen (pork chops cooked with sauerkraut).

For something sweet, keep an eye out for Bethmannchen, little marzipan balls with three almonds pressed into them. They're named after a Frankfurt banking family that first served them in the 1800s. Each almond represented one of the family's sons. There were originally four almonds, but sadly, after one son's death, the number was reduced to three.

Want to take a break from German food? Frankfurt's international community means there are ethnic restaurants here of all sorts. You'll find Italian, Japanese, Thai, French, Middle Eastern, African, Greek and just about any other cuisine you can name.

Here are our picks for lunching in Frankfurt:

Kleinmarkthalle: This local market hall, not far from Romerberg Square, is the perfect place to graze your way through lunch. You'll find all the favorite Frankfurt dishes and ingredients here. Some of the butchers sell hot sausages and sandwiches, while others offer grune sosse. There are numerous tempting bakery stands and cheese displays. Head upstairs for an oyster bar, an Italian deli and a traditional, full-service restaurant. (5 Hasengasse; 49 (0) 69 212 33696; open Monday through Friday 8 a.m. to 6 p.m., and Saturday 8 a.m. to 4 p.m.)

Lafleur: Offering something a bit more upscale, Lafleur -- located in the Palmengarten botanical park -- holds two Michelin stars and serves an international gastronomic menu. It's also known for offering an outstanding vegan alternative menu. The prix-fixe business lunch is an excellent value in this expensive city -- and, like the evening menu, includes a full vegan option. (11 Palmengartenstrasse; 49 (0) 69 900 29100; open Tuesday 6:30 p.m. to midnight, Wednesday to Friday noon to 3:00 p.m. and 6:30 p.m. to midnight, and Saturday from 6:30 p.m. to midnight)

Atschel: In the Sachsenhausen district (known for its apple wine restaurants), one of the best is Atschel. Founded in 1849, this pub serves big portions of traditional German food  -- we're talking huge portions of schnitzel or pork knuckle (and they also serve steak) -- washed down with pitchers of apfelwein. In the summer, you can dine in an outdoor garden. (7 Wallstrasse; 49 (0) 69 619201; open daily noon to 11 p.m.)

Fujiwara: If you want to go 180 degrees from German food, there are plenty of Asian restaurants in the city. Try Fujiwara, on the south side of the river not far from the museum district. It offers lunch combos that include sushi, sashimi, tempura, fried chicken karaage and more, served with soup and sala, all at reasonable prices for Frankfurt. (1 Cranachstrasse; 49 (0) 69 663 71816; open Wednesday through Saturday noon to 2 p.m. and 6 p.m. to 10 p.m., and Sunday 6 p.m. to 9:30 p.m.)

Aha! You thought we were going to suggest you quaff the local beer, right? Well, there are definitely breweries in Frankfurt, but the iconic local drink is actually apple wine (apfelwein). It's typically poured from a blue-painted earthenware jug into small glasses decorated with a diamond-shaped pattern. Don't expect it to be sweet like cider; the taste is tart and a bit sour, and some locals like to mix it with sparkling water. You'll find pubs specializing in apple wine in the riverside Sachsenhausen district, where less-traditional spots may even shake it up in cocktails.

Romerberg Square (Romerplatz): This large square in Old Town (Altstadt), mostly reconstructed after World War II, gives you an idea of what Frankfurt's many half-timbered buildings once looked like. On one side, three gothic houses with step-roofs were turned into the city hall (Rathaus) more than 500 years ago. You can tour the Imperial Hall, located in the center building, where emperors held their coronation banquets. The tourism office is also located on the square, as are traditional restaurants where you can sample local fare. Wondering how the square got its name? "Romer" means Roman in German, and this area was the location of early Roman settlements.

St. Bartholomew Cathedral (Dom St. Bartholomaus): Locals refer to this striking, red-sandstone church as "the Cathedral" or "the Emperor's Cathedral." Rebuilt after World War II, it was founded in the 13th century on the site of an even older structure. In the Election Chapel, seven prince-electors chose the Holy Roman Emperor and he was crowned here in the Dom. At first glance the interior might seem a bit plain, but there are some lovely carvings in the choir and chapels. If you want to work off some of that heavy German food, climb partially up the 311-foot spire to a viewing platform with great views of the city. (1 Domplatz; 49 (0) 69 297 0320; open Monday through Thursday and Saturday 9 a.m. to noon and 1:15 p.m. to 8 p.m., Friday 1:15 to 8 p.m., and Sunday 1 p.m. to 8 p.m.)

Stadel Museum: One of the best museums in Germany, this gallery houses a collection that spans 700 years of European art. Highlights include Old Masters including Vermeer, Rembrandt and Botticelli; Impressionists such as Monet and Degas; and more modern works from Picasso and Francis Bacon. The Stadel is located on the south side of the river, on the Museum Embankment (Museumsufer), which is a lovely area to stroll. (63 Schaumainkai; 49 (0) 69 6050 98232; open Tuesday, Wednesday, Saturday, Sunday from 10 a.m. to 6 p.m., and Thursday and Friday from 10 a.m. to 9 p.m.)

Goethe House (Goethe Haus): Johann Wolfgang von Goethe is Frankfurt's favorite son, and Germany's most famous writer. You can visit the (reconstructed) house where he was born and see his writing room, the puppet theater he played with as a boy, and paintings depicting Goethe, his friends and his family. Even if you're not a fan of Goethe's works, the house is a fascinating peek into 18th-century life, with a kitchen, music room, library and more throughout the house's four floors. (23-25 Grosser Hirschgraben; 49 (0) 69 138 800; open Monday through Saturday 10 a.m. to 6 p.m., and Sunday and public holidays, 10 a.m to 5.30 p.m.; no wheelchair access)

Commerzbank-Arena : Germans are serious soccer fans. Why not get tickets to a game? Or sign up for a guided stadium tour that includes the dressing rooms, VIP facilities, press areas and museum. You can check tour availability and sign up online (use Google Translate to convert the website into English). (362 Mörfelder Landstrasse; 49 (0) 69 23 80 80 121 or email office@commerzbank-arena.de)

Shopping: The main commercial zone is along the Zeil shopping promenade, stretching between Hauptwache and Konstablerwache streets. Here you'll find department stores, specialty shops and international chains, as well as the MyZeil Mall, located in a showy glass-enclosed structure. For the top designers, head to Goethestrasse, while Brückenstrasse is home to local designers and independent boutiques. If you want to wander a street with both interesting shops and cafes, head to lower Berger Strasse. For home decor boutiques, check out the area north of Romerberg Square. Major stores are open weekdays from 9 a.m. to 8 p.m. and Saturday 9 a.m. to 4 p.m.; smaller shops close at 6:30 p.m. on weekdays and at 2 p.m. on Saturdays. Stores are closed on Sundays, aside from a few rare dates when Sunday shopping is permitted.