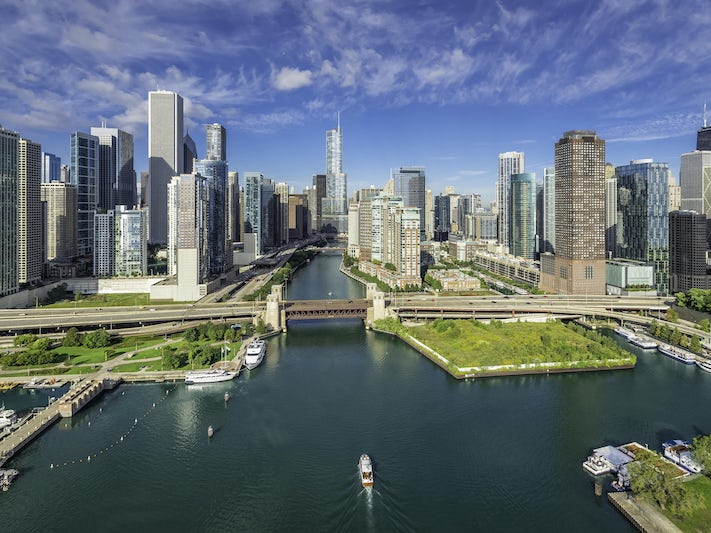 Popular Things to Do in Chicago

Though nowhere near the ocean, Chicago is typically a stop on a handful of American river cruise itineraries in the Great Lakes area. It's a city worth exploring to the full extent if you get the chance. Whether you take an excursion to tour the Windy City's legendary sports stadiums or its world-class museums, take a food-based excursion to sample its most well-known goodies or take in a comedy show at The Second City, you're sure to have a memorable experience. Surprisingly, you'll even find a beach in Chicago -- there are 18 miles of protected shoreline along Lake Michigan.

Chicago winters are bitterly cold, so most travelers visit during the much sunnier spring and summer months. English is the official language and the U.S. dollar is the official currency.

Find Things to Do in Chicago on Viator

Food and Drink in Chicago

Celebrity chefs like Charlie Trotter and Rick Bayless put the Second City on the map as a first-rate dining destination. Although Chicago's avant-garde culinary scene has a world-class reputation, plenty of moderately priced fare is available to satisfy anyone's appetite. Three must-try items are deep dish pizza, the messy Italian beef sandwich and the Chicago-style hot dog, loaded with everything except ketchup.

If you really want a taste for a messy Chicago favorite, make the trip to Al's Italian Beef's original location in the city's Little Italy neighborhood. Order an Italian beef sandwich with hot peppers and ask for it dipped. (1079 W. Taylor Street; 312-226-4017; open 9 a.m. to 11 p.m. Monday to Friday, 10 a.m. to 11 p.m. Saturday and closed Sunday) There's also a location at 169 W. Ontario Street in the River North neighborhood, closer to the bustling Magnificent Mile and Navy Pier.

Everything in the garden, from pickles to tomatoes to peppers, even cucumbers, can go on a Chicago dog. There's just one rule: No ketchup! Not to worry though. Being Midwesterners, they're pretty accommodating. If you insist, Wiener Circle, a popular hot dog joint about a mile south of Wrigley Field, will give you your ketchup. (2622 N. Clark Street; 773-477-7444; open 10:30 a.m. to 4 a.m. Sunday to Thursday, 10: 30 a.m. to 5 a.m. Friday to Saturday)

Stand in line for your corned beef or half and half (half corned beef, half pastrami) piled high on rye at Manny's Coffee Shop and Deli, a Chicago tradition for more than 50 years. Take a look at the photos on the walls of this humble cafeteria and you'll see it's been a required stop on the campaign trail for decades. Famous for its corned beef and potato pancakes, Manny's customers come from all over the country to dine at this family owned delicatessen. (1141 S. Jefferson Street; 312-939-2855; open 6 a.m. to 8 p.m. Monday to Saturday, closed Sundays)

Lao Sze Chuan is a Chinatown favorite, located in the southwest corner of Chinatown Square. It takes reservations only for parties of six or more. Leave your name as soon as you arrive, and instead of standing around waiting, check out the surrounding gift shops, selling everything from Chinese toys and trinkets to exotic herbs and teas. (2172 S. Archer Avenue; 312-326-5040; open 11 a.m. to midnight daily)

Galileo's Cafe, the outdoor patio of the Adler Planetarium, offers a jaw-dropping view of the Chicago skyline, and the telescopes are a fun way to check out the details of the skyscrapers lining the lake. A tip: You don't need to pay museum admission to enjoy an alfresco lunch there. You just can't bring your own food. (1300 S. Lake Shore Drive; 312-922-7827; open 10 a.m. to 2:30 p.m. daily)

The base of the iconic Tribune Tower, home to the Chicago Tribune newspaper, is the perfect spot for an alfresco lunch. Drink in the view of Michigan Avenue and the landmark Wrigley Building, along with your choice from hundreds of beers at Howells and Hood. The restaurant's named after the Tribune Tower's architects and serves classic American fare with a fun twist. A "Blues Brunch" with live music is offered Sundays. (435 N. Michigan Avenue; 312-262-5310; open 11 a.m. to 10 p.m. Monday to Thursday, 11 a.m. to 11 p.m. Friday to Saturday and 10 a.m. to 10 p.m. Sunday)

Generations have dined in style just off the Mag Mile, inside the historic 1890s McCormick Mansion at Lawry's The Prime Rib. Meals in this ornate dining room are wheeled to your table on silver carts. Don't feel like wearing a suit and tie? Adjacent to the formal dining room is the more casual, and hipper, SideDoor. (100 E. Ontario Street; 312-787-5000; open 5 p.m. to 9 p.m. daily)

Located on the 16th floor of the Trump Hotel Chicago, Sixteen serves breakfast, lunch and dinner in an elegant setting with million-dollar views. Not surprisingly, those exclusive views from the floor-to-ceiling windows come at a high price. During the warmer months Sixteen opens its doors to the outdoors. There may be nowhere better to dine on a starry summer night in Chicago than the Terrace at Trump, overlooking the twinkling lights of downtown. (401 N. Wabash Avenue; 312-588-8030; open 5:30 p.m. to 9 p.m. daily)

Consistently ranked as one of the best restaurants in North America and the only one in Chicago with Michelin's coveted three star rating, is Lincoln Park's Alinea. Reserve a table far in advance to experience Chef Grant Achatz's innovative modernist fare. (1723 N. Halsted Street; 312-867-0110; open 5 p.m. to 9:30 p.m. Wednesday to Sunday, closed Monday to Tuesday)

Walk 1.5 miles along Lake Michigan to Millennium Park and enjoy some of the many free activities at the urban park. In the summer, enjoy free concerts and the innovative work of contemporary architect Frank Gehry at the Jay Pritzker Pavilion. Check out your reflection in artist Anish Kapoor's Cloud Gate sculpture known as "The Bean." On a hot day, Millennium Park's Crown Fountain (two, 50-foot glass block towers at each end of a shallow reflecting pool) becomes a whimsical urban water park.

Buckingham Fountain is a majestic lakefront landmark (301 S. Columbus Drive) and serves as one of the largest fountains in the world. During the warmer months, the fountain shoots off a 20-minute water display, every hour on the hour.

Michigan Avenue, known as the Magnificent Mile, or Mag Mile, is the Fifth Avenue of the Midwest. It's home to high-end shops, including Gucci and Tiffany's. But you'll also find a bustling Apple Store and the flagship American Girl. Not only can you buy dolls, but there are aisles of clothing (including matching outfits for children and their dolls), a doll hair salon, even a doll hospital. Or you can try a romantic carriage ride around the surrounding Gold Coast neighborhood.

In the mood for a laugh? Chicago is renowned for its comedy clubs. The most famous, Second City (1616 N. Wells Street; 312-337-3992), acts as a training ground and has produced generations of Saturday Night Live cast members. It's a quick three-mile ($12 to $15) cab ride from Navy Pier and offers nightly shows.

The ivy-laced landmark Wrigley Field (1060 W. Addison Street; 773-404-2827) celebrated its 100th birthday in 2014, and unlike other sports stadiums in Chicago, Wrigley Field is planted right in a bustling neighborhood of bars and restaurants, known affectionately as Wrigleyville. Make sure to stay for the seventh-inning stretch tradition of singing "Take Me Out to the Ball Game."

Chicago is considered the capital of the blues. A first-rate venue for hearing this soul-stirring music is Buddy Guy's Legends (700 S. Wabash Avenue; 312-427-1190). The club was opened by legendary guitarist and singer Buddy Guy in 1989, and the blues musician still performs there regularly.

One of the most respected art museums in the U.S., the Art Institute of Chicago (111 S. Michigan Avenue; 312-443-3600) holds one of the world's best collections of impressionist art. The Chagall stained glass window is not to be missed.

The city is known as the birthplace of modern architecture. A variety of groups offer architectural tours, walking and by boat along the Chicago River, but the most respected tours are run by the Chicago Architecture Foundation (224 S. Michigan Avenue; 312-922-3432). Certified docents provide more than 80 tours, from the landmarks of downtown to tours of the hidden gems in the city's many neighborhoods. The most popular is the Architectural River Cruise, a 90-minute tour that leaves from the nearby riverfront.

Venture outside Chicago's bustling downtown Loop to Hyde Park, about seven miles south. It's home to the University of Chicago as well President Barack Obama's house -- on South Greenwood Avenue between 50th and 51st streets. The Obama house isn't open for tours. However, the Frederick C. Robie House (5757 South Woodlawn Avenue; 800-514-3849), one of architect Frank Lloyd Wright's masterpieces and a U.S. National Historic Landmark, is open to the public. Serenity-seekers should stroll through nearby Osaka Garden, a Japanese garden nestled on the north end of the Wooded Island in historic Jackson Park.

Chicago prides itself on being a city of neighborhoods, many reflecting the ethnic heritage of the immigrants who planted new roots. One of the most vibrant immigrant neighborhoods is Chinatown, one of the largest in the U.S. Hop on the downtown water taxi at the Chicago River and take it directly to Chinatown.

You can chart your own course between the towering skyscrapers that line the Chicago River in a kayak. Urban Kayak rents them for $30 an hour. They also offer guided tours. (260 E. Riverwalk South; 312-965-0035)

Families will love touring the Museum of Science & Industry (5700 S. Lake Shore Drive; 773-684-1414) on Chicago's South Side. Originally built for the 1893 World's Columbian Exposition, visitors enjoy descending into the coal mine exhibit and stepping aboard the Zephyr Train and the U-505, the only German submarine on display in the U.S.

Didn't know Chicago had beaches? Many people make the scenic 1.5-mile walk north from Navy Pier to Oak Street Beach. On a hot day, you might mistake it for Miami Beach, with its sunbathers, rollerbladers and volleyball games in the sand. Along the way you'll pass the area known as "the playpen," where boaters tie up together for a massive party in the lake.