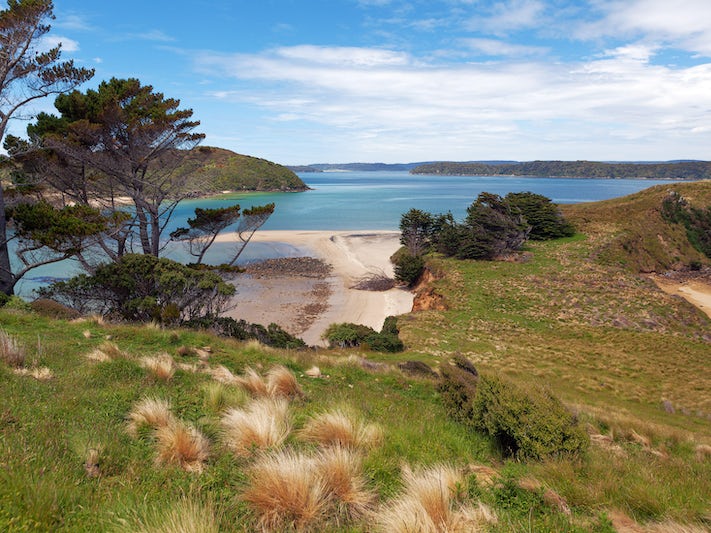 Find Things to Do in Stewart Island on Viator

Popular Things to Do in Stewart Island

Food and Drink in Stewart Island

Seafood -- crayfish, green-lipped mussels, salmon and blue cod -- is Stewart Island's specialty, although there are only a handful of restaurants to enjoy these dishes. Stewart Island's four or five eateries are in Oban and include a pub/restaurant inside a hotel and a couple of places serving casual meals and good coffee.

The island's most highly-rated restaurant (Church Hill Restaurant and Oyster Bay (www.churchhill.co.nz/dining) is mainly a dinner venue, and while it does advertise lunch (offered between noon to 2pm), it advises diners to ring and check availability first. Prices tend to be higher on Stewart Island than elsewhere in New Zealand due to its remoteness and the fact that staff are often hard to retain.

Casual Joint KaiKart Takeaway You can't miss this blue caravan selling classic fish and chips, blue cod burgers and battered mussels. Located next to the museum, it's an ideal place for a hearty snack before or after a town ramble. You can pull up a chair outside the "food cart" or take your meal down to the waterfront and dine on the grass. Fish and chips get the thumbs-up from locals and visitors alike. It's open from 11.30 am to 2 pm, and from 5 pm to 9 pm. (7 Ayr Street; +64 03 219 1225)

Local favourite South Sea Hotel The large cream-and-red roofed hotel is an Oban icon. It has hotel rooms, a restaurant and pub, and views over Halfmoon Bay from the ground floor terrace. Seafood is the focus and you'll find marinated mussels, Stewart Island battered blue cod and baked cod on the menu, along with pizzas, burgers, burritos and salad. Lunch is served from 11.30am- 2pm. If the weather is fine grab one of the tables on the terrace and watch all the maritime activity. (26 Elgin Terrace; +64 03 219 1059)

Great coffee spot Kiwi-French Creperie Here's a little one-stop shop that offers not only great coffee and crepes but a chance to pick up a souvenir of locally-made jewellery and ceramics. Apart from savoury and sweet crepes (the chocolate and banana crepe is very tempting), the menu also offers soup and sandwiches.(10 Main Road; +64 27 314 6192, or 27 218 1366)

Although Stewart Island isn't your classic sunbathing and swimming destination, the island is surrounded by several beautiful bays and beaches. If the weather's fine and warm they are perfect for a dip; if the weather's not ideal, then a walk along a sandy strip of shoreline is an invigorating experience.

Best for swimming The suitably-name Bathing Beach is just a short walk or an even shorter drive west from Oban along Kamahi Road. It's a sheltered spot; at low tide you can walk the entire length of the curved beach, but it is divided in half at high tide by a rocky headland. Just around the headland from Bathing Beach is the equally peaceful Butterfield Beach. It's 1.3 km from Oban village or a 30-minute walk along Horseshoe Bay Road.

Best for long walks Horseshoe Bay is another lovely, long beach, accessed via Horseshoe Bay Road from Oban. It's 3.4 km from the village. Pick up a snack at either the supermarket or one of the cafes and enjoy a half-day excursion. Several walking trails branch off from the bay. Interestingly Horseshoe Bay and Halfmoon Bay were the subject of a name mix-up by early cartographers. Horseshoe Bay is in fact shaped like a half moon, while Halfmoon Bay is more like a horseshoe

Oban village: Located on lovely Halfmoon Bay this is the "big smoke" of Stewart Island, where three-quarters of the island's population of about 380 live. The village sign, at the beach, is written in Gaelic script and is one of the many Scottish aspects of the little town. Streets are named after Scottish towns (there's Ayr, Dundee and Argyle), the main church is Presbyterian and Oban itself was taken from the name of a town on the north-west Scottish coast,

Visit the Rakiura Museum to see a significant collection of artefacts telling the story of the early Maori inhabitants, as well as sealers, whalers and shipbuilders who settled in the 19th century. (Ayr Street; +63 3 219 1221; open Monday to Saturday, 10 am to 1.30 pm, Sundays noon to 2 pm between October and April.)

Take a 30 to 40-minute walk to Ackers Cottage (also called Ackers Stone House) located on Harrolds Bay to the east of the village. Built in 1836, it is the island's oldest structure. (Follow the main harbour street of Elgin Terrace to the east, passing various bays including Lonneker's Beach and Leask Bay).

Walking Trails: Fresh air and wide open spaces are Stewart Island's assets (along with its birds and fauna), so take a walk on a variety of easy to medium trails that either hug the coastline or provide beautiful forest views. See the On Foot section above. Ask the Oban Visitor Centre for details (Red Shed; 12 Elgin Terrace; +64 3 219 0056)

Ulva Island: This island inside Paterson Inlet is a popular tour offered by cruise ships, but can also be visited independently using one of the water taxi operators or the Ulva Ferry. Measuring 266 hectares (or 400 rugby fields as New Zealanders like to say) the island is considered a primeval beauty spot with natural forests and sandy beaches. Located a seven-minute boat ride from Golden Bay, Ulva Island is predator-free. Rats were eradicated in 2012 and there are no possums or stoats, which normally prey on native birds. In fact, the island was deemed a "game and flora" reserve by the New Zealand government as early as 1899 and today is home to 20 native birds including wekas, saddlebacks, robins, oystercatchers and 30 to 40 Stewart Island Brown Kiwis (called the tokoeka) and the rare kakapo, the world's only flightless parrot.

Scenic Cruises: Paterson Inlet is dotted with some 20 islands - the largest being Ulva - and its waters are home to penguins, dolphins and seabirds. Several companies offer two- or three-hour scenic cruises, or cruises that also combine guided walks and visits to a former Norwegian Whaler's Base. (Aihe Water Taxi/Cruises, 14 Main Road, Oban; +64 3 219 1066; www.aihe.co.nz)