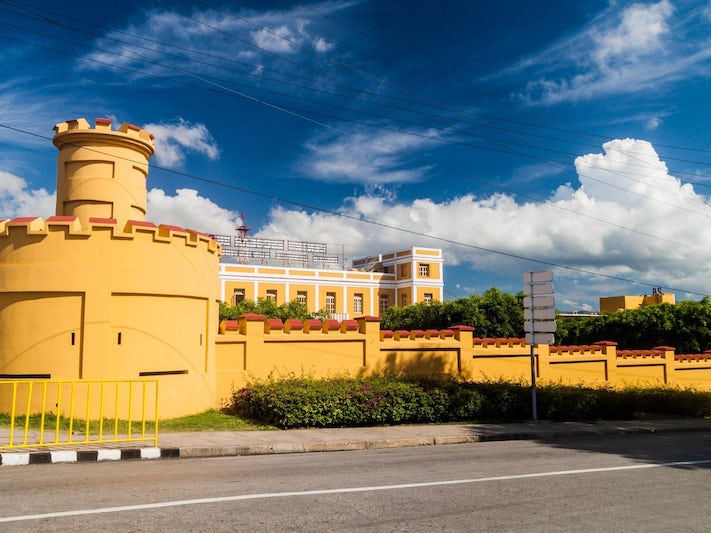 Find Things to Do in Santiago de Cuba on Viator

Popular Things to Do in Santiago de Cuba

As with the whole of the rest of the country, Santiago de Cuba has benefitted greatly from the relaxation of the laws restricting the ownership and size of privately run restaurants, known as paladars. While not quite at the cutting edge of cuisine, there are a number worth seeking out both in the town center and slightly outside.

Compay Gallo leads the charge when it comes to reinventing Cuban cuisine, with interesting twists on traditional dishes such as rice and fried beans, served and presented in a stylish way. Perhaps the oddest dish is the shrimp cocktail, which has a live fish swimming around in a bowl below the dish. The setting is lovely, on two floors with a waterfall. It's just a few blocks from Parque Cespedes. (San German No. 503, corner of C/Carniceria)

Rumba Cafe is a good central spot to grab a sandwich or a snack at a reasonable price. Each drink includes a little tapa, Spanish style. Service is excellent, and there's a shady patio at the back. (San Felix 455)

It's worth jumping in a cab to make a visit to El Palenquito, located about 10 minutes from the city center. Ranked first in TripAdvisor's ratings, this paladar is located on a quiet residential street and has a barbecue pit. Suckling pig, roasted chicken and seafood kebabs are on the menu, which will set you back 8 CUC per person, which is a real bargain. (Avenida de Rio 28, Calle 6 y Carretera del Caney)

With Daiquiri beach nearby and Santiago being home to the island's first rum factory, it has to be a daiquiri.

Best for Families: Playa Siboney is effectively the city beach, lying just a few miles from the center. The vibe there is relaxed and friendly, and families arrive on weekends. The beach isn't spectacular -- Hurricane Sandy saw to that -- but it is a pleasant place to escape for an afternoon.

Best for Active Types: There are more than 70 scuba diving sites along the coast, primarily centered on one spot: Centro Internacional de Buceo Carisol los Caroles, a hotel and dive center about 27 miles east of Santiago.

Best Secluded Beach: Many of the beaches were badly damaged by Hurricane Sandy, but a few gems remain, including Playa Baconao, which is on the corner of the lake of the same name. It lies about 31 miles from Santiago.

Parque Cespedes, flanked by wonderful examples of Colonial and older architecture, was once the place for locals to sit under shady palms, hang out and gossip and watch the world go by. When Hurricane Sandy hit in October 2012, it sadly ripped out all the palm trees that gave this space such character. They have not been replaced, and while the square is still a popular spot, people generally don't linger because there's no shade.

Still, there are several culturally significant buildings worth checking out. Casa de Diego Velazquez is the most outstanding. Dating from 1522, this is the oldest house on the island and was the official residence of the island's first governor. Heavily restored in the 1960s, it opened as the Museo de Ambiente Historico Cubano, a cultural museum; sadly, it has been closed since 2014. Flanking the entire south side of the square is the Catedral de Nuestra Senora de la Asuncion, a stunning example of neoclassical architecture, again heavily restored and, like many buildings in Cuba, undergoing ongoing restoration. It can be visited and is worth a peak inside, with beautiful frescoes and carvings adorning the walls. Just below is the state tourist agency, which sells books, postcards, caps and T-shirts at inflated prices.

The east side of the square is home to the imposing Hotel Casa Granda, with its wonderful rooftop terrace, and beside this, Casa de la Cultura Miguel Matamoros, a former private members club for rich locals. The north side of the square holds the town hall, or Ayuntamiento, a beautiful neoclassical building best known for Fidel Castro's proclamation from a balcony on the night of January 2, 1959, that the revolution had succeeded.

No trip to Santiago is complete without a visit to the Museo del Ron, (which is a shrine to all things rum-related on the island. There's also a welcome bar at the end where you can sample the wares. (C/Bartolome Maso, 358; open 9 a.m. to 5 p.m Monday to Saturday; admission 2 CUC)

There is also the Bacardi Rum Factory at the other end of town near the train station. Unfortunately, Bacardi does not offer tours, but there is a small bar attached where you can have a drink and buy the product. (Av. Jesus Menedez, 703; open 9 a.m. to 6 p.m.)

A couple of blocks north of there, just off Aguilera, is another museum with the name most closely connected with rum -- Bacardi. Museo Municipal Emilio Bacardi Moreau is a stunning building dedicated to Emilio Bacardi's extraordinarily diverse collection of artifacts amassed from a life of fascinating travels. You also learn about how he became one of the wealthiest men of the age, as well as a hero during the Spanish-Cuban-American wars in the late 19th century. (C/Aguilera; open 1 p.m. to 5 p.m. Monday, 9 a.m. to 5 p.m. Tuesday to Friday, 9 a.m. to 1 p.m. Sunday; admission 2 CUC)

Hurricane Sandy did not destroy the palms in Plaza de Dolores, a pretty square, which is a popular spot for locals to hang out, watch people, hustle, enjoy a quiet game of dominoes or just have a drink. There are bars all around where you can sit outside. Expect a certain amount of hassle, which dies down after you've said you're not interested in buying anything or listening to "Guantanamera" strummed for the umpteenth time.

A few blocks up from there, you'll get to the top of town to another square, Plaza Marte, which marks the end of the old quarter. While it doesn't have quite the atmosphere of the other squares, it's always bustling with life, people using it to cut through, and permanently traffic choked with cars and scooters. It's a good place to get your bearings, though: just down from there is the Cuartel Moncada, where arguably the seeds of the "Cuban Revolution" were sown.

Cuartel Moncada, or the Moncada Barracks, are as significant to "La Revolucion" as Revolution Square in Havana. It was at the barracks on July 26, 1953, that a ragtag group of young revolutionaries led by a young Fidel Castro stormed the barracks and surrounding buildings. The 100 or so revolutionaries were poorly organized and the attack ill thought out. Within 10 minutes, it was over, with Castro's troops having fled, been killed or captured. Co-leader Abel Santamaria and the band of troops he led were captured and executed. Castro fled to the nearby mountains and was subsequently captured, but his life was spared because of public criticism at the brutality of the Fulgencio Batista regime in killing Castro's co-conspirators. He was tried and jailed, but his course was set, and within six years the Batista regime would be overthrown, and Castro's would begin.

It's a huge complex, part school, part hospital and part barracks, and you can wander around the outside at will, peering in at the various revolutionary slogans and bullet holes that pockmark the walls. The museum is by Gate 3, where the attack took place and near the bottom end of the sloping hill, where Avda. Moncada joins Paseo de Marti. It's well worth a visit, even if you have just a passing interest in the history of the revolution, as it details exactly how the whole attack played out. Plus, there are photographs of those captured and killed. (Open 9 a.m. to 5 p.m. Monday to Saturday, 9 a.m. to 1 p.m. Sunday; 2 CUC)

There is a pretty park opposite the barracks dedicated to Santamaria -- Parque Historico Abel Santamaria -- which is the location of the hospital that he and his compadres stormed that day in 1953. Its centerpiece is a huge fountain with the likenesses of Santamaria and another revolutionary, Jose Marti, on the side.

One other museum, Museo de la Lucha Clandestina, is well worth a visit. It is located toward the bottom of town a short walk from the port. It details the underground resistance against the Batista regime. Opposite, is the house where Fidel Castro lived for two years when he studied there. (C/General Jesus Rabi, 1; open 9 a.m. to 5 p.m. Tuesday to Sunday; admission 1 CUC)

Granjita Siboney is another spot enshrined in revolutionary history. It was there on July 26, 1953, that Castro and his revolutionaries set off in a convoy of cars to attack the Moncada Barracks in Santiago. The house is well preserved and has a number of artifacts relating to the attack, including photos and various weapons.

La Gran Piedra (admission 1 CUC) lies about 45 minutes from Santiago and is named after the huge stone that stands atop the hill. It's lush and green, a former coffee plantation that is part of a UNESCO Biosphere Reserve. You can climb to the summit with relative ease, and there are breathtaking views over the mountains and the sea. Cafetal la Isabelica (open 8 a.m. to 4 p.m.; 2 CUC), lies about two kilometers away and is the site of Cuba's first coffee plantation, dating from the 19th century.

Parque Baconao is a UNESCO Biosphere Reserve that has one of the largest endemic species of flora and fauna on the island (some 1,800 at last count). The park stretches down to the shore and east to the river after which it's named. It's most famous for its Valle de la Prehistoria (Prehistoric Valley), which has more than 100 life-size dinosaur models and probably will remind you of a scene from Jurassic Park (except the dinosaurs don't move). There also is an old car museum, Museo Nacional de Transporte Terrestre (open 8 a.m. to 5 p.m.; admission 1 CUC), but you question the point when you can stand on any street corner in any Cuban town and see the same cars driving past.