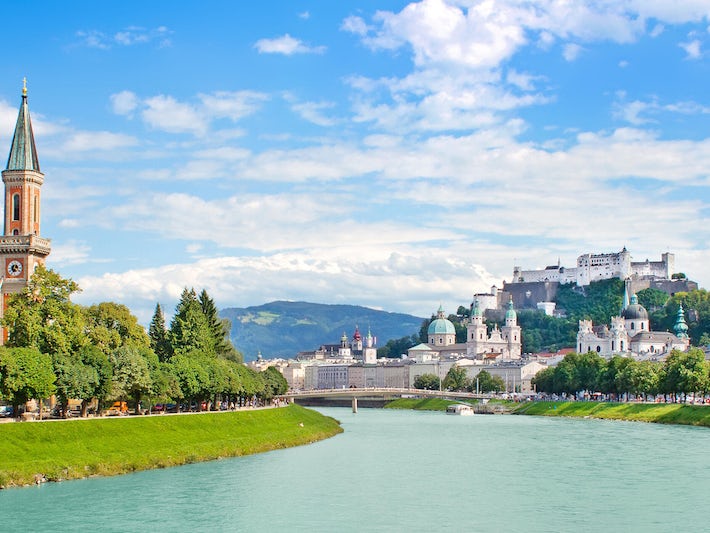 Find Things to Do in Linz (Salzburg) on Viator

Popular Things to Do in Linz (Salzburg)

Food and Drink in Linz (Salzburg)

Austrian food is a varied affair, having been shaped over several centuries with a multitude of cultural influences. The Bavarian influence is heavily felt in Upper Austria, where dumplings, krauts (pickled vegetables), meat, potatoes, salads and fish dishes are the tradition. Linzertorte is a famous dessert cake from Linz, and Salzburg is known for its Kasnocken (cheese dumplings) and Salzburger nockerl (a meringue-like dessert). Other well-known traditional Viennese-Austrian offerings include wiener schnitzel (breaded veal) and apfelstrudel (apple strudel pastry). And of course, the national drinks are very much beer, schnapps and the Wachau Valley white wines. In Upper Austria, there is also an uncarbonated cider known as Most (or apfelwein).

Salzburg has no shortage of lovely cafes, and you won't struggle to find good food here, but here are a few of our top recommendations.

Augustiner Braustubl: The Augustine Brewery at Mulln has been Salzburg's home for gemutlichkeit (warmth, friendliness, and good cheer) for ages. Founded by monks in 1621, the brewery continues to brew craft beer in wooden barrels and serve it up to patrons in large (and larger) ceramic steins. On nice days, the beer garden is a great place to sit under the chestnut trees and enjoy a range of food from the onsite food stalls offering meats, salads, pickled vegetables and fish dishes. The food is inexpensive and the beer is tasty. It's all self-service, and the picnic tables are shared, so you'll be sure to make new friends while you're here. (Lindhofstrasse 7, 5020 Salzburg; +43 662 431246; open daily from 3 p.m. to 11 p.m., Saturdays, Sundays and holidays: 2:30 p.m. to 11 p.m.; hot meals served until 10 p.m.)

Magazin: Not far from the easygoing brewery is a far more chic and refined affair called Magazin. If you're looking for gourmet, go there. The menus and the ingredients are seasonal, and the restaurant has an enormous selection of wines on hand. You can eat indoors in the modern, industrial space or outside in a courtyard at the foot of Monchsberg's sheer rock wall. Menus are a la carte, but there are also tasting menus available. (Auginergasse 13a, Salzburg; +43 662 84 15 84; open 10 a.m. until midnight, Monday through Saturday)

M32: Another chic affair, this modern fusion restaurant and coffee bar offers some of the best views in the city. Another perk? You can get a two-course lunch for around 15 euros -- a bargain compared to the price of the mains or five-course dinners. Menus are seasonal and ingredients are local and organic when available. The restaurant is all glass walls leading out to a terrace that looks out over Salzburg and Alpine peaks beyond. (Monchsberg 32, Salzburg; +43 662 84 10 00; open 9 a.m. to 1 a.m., Tuesday through Sunday).

You'll find no shortage of beer in Austria, and the white wines -- particularly the Gruner Veltliner and Riesling varietals of the Wachau Valley in Lower Austria -- are good, too. In Upper Austria, where Linz and Salzburg are located, the regional classic is called Most, a non-carbonated cider. Austria is also known for its schnapps -- distilled fruit liquor. Schnapps is often drunk after a meal as a digestif. Be careful, it's strong.

Because of its historic importance in the salt trade (both the city and the river running through it get their names from the seasoning), Salzburg has long managed to incorporate both sophistication and traditional regional culture. Called the "Rome of the North," Salzburg's powerful rulers, the Catholic Prince-Archbishops, brought baroque architecture to Salzburg from Italy in the 17th century. And given its proximity to southern Germany, Salzburg's culture has strong Bavarian ties. The most celebrated historical achievement of Salzburg, however, is its music, and in particular the symphonies, concertos and soaring strings of the city's prodigal son, Wolfgang Amadeus Mozart.

Mozarts Geburtshaus: Mozart is the city's main draw, and not just one, but two museums commemorate his early life in Salzburg before he left for Vienna. This particular museum celebrating the child prodigy's early years from his birth in 1756 until the family moved when he was 17 is hard to miss. Painted in bright yellow and adorned with the German "Mozarts Geburtshaus" (Mozart's birth house) in golden letters, the museum contains portraits, instruments -- including his toddler-sized violin -- and other personal effects. (Getreidegasse 9, Salzburg; open every day from 9 a.m. to 5:30 p.m. and from 8:30 a.m. to 7 p.m. in July and August, + 43-662-84 43 13)

Mozart-Wohnhaus: Regarded as the more comprehensive of the two Mozart museums, this house was the Mozart family residence from 1773 to1787. Mozart lived here until the age of 25, when he moved to Vienna. The residence houses scores and portraits as well as Mozart's original pianoforte. (Makartplatz 8, Salzburg; open daily form 9 a.m. to 5:30 p.m. and 8:30 a.m. to 7 p.m. in July and August)

Festung Hohensalzburg: The Hohensalzburg Fortress (Monchsberg 34, Salzburg; January through April and October to December: 9:30 a.m. to 5 p.m., May through September: 9 a.m. to 7 p.m., Advent weekends and Easter: 9:30 a.m. to 6 p.m., December 24, last entrance at 2 p.m.) built in 1077 by Prince Archbishop Gebhard is one of the largest medieval castles in Europe. Set atop Monchsberg Hill, the castle dominates the city skyline with its position and bulk -- it's large enough to hold a community of 1,000 and engineered so that it can be self sufficient if necessary. The fortress never actually faced an attack, though local peasants unsuccessfully laid siege to the spot in 1525. The castle is walkable, and the views from the hill and the castle's ramparts are the best in the city. There is easy access via a funicular railway, called the Festungsbahn. (Festungsgasse 4, Salzburg; 9 a.m. to 5 p.m. October through April, 9 a.m.to 8 p.m. May, June and September, 9 a.m. to 10 p.m. July through August)

Schloss Mirabell and Gardens: The Mirabell Palace and Gardens should look familiar to "The Sound of Music" enthusiasts as the spot where Julie Andrews' Maria and her von Trapp children bounced up and down the steps, singing the classic "Do-Re-Mi" song from the musical. Built around 1606, the palace itself was an ode of sorts from Prince-Archbishop Wolf Dietrich von Raitenau to his mistress Salome Alt. It was redesigned in the baroque style in the 18th century and severely damaged by Salzburg's great fire of 1818. The palace is now home to the town's municipal offices, and the palace's Marble Hall plays host to hundreds of weddings each year. The beautiful Mirabell Gardens date from about 1690, with design flourishes -- the Pegasus Fountain, for example -- added as recently as the 20th century. Emperor Franz Joseph I opened the gardens to the public in 1854.

Sound of Music Tour: There is no shortage of options and events trading on the popularity of "The Sound of Music," and you can pay for a tour that will take you to some of the locations featured in the 1965 film adaptation of the Rogers and Hammerstein musical. You can make your own self-guided tour, however, by simply picking and choosing from some of the sights. A good place to start is the Mirabell Gardens, mentioned above. Behind the Hohensalzburg Castle, there's a path to the Nonnberg Benedictine Abbey that was used as Maria's nunnery in the film (Nonnberggasse 2, Salzburg; open 7 a.m. to dusk, daily) Continuing down Nonnberggasse to the Almgasse and through the park-like lands below Monchsberg Hill, walking down Leopoldskroner Allee will bring you to Schloss Leopoldskron, a rococo palace set on a lake. The setting should look familiar, and the grounds were one of the main exterior locations for the movie although the palace itself is not the von Trapp villa. The Villa Trapp, actually, is across the river and outside the old town, quite a long way away.