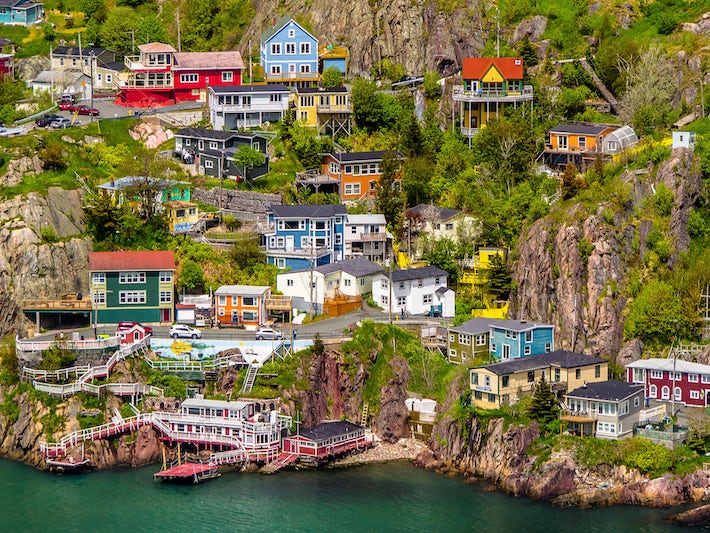 Find Things to Do in Newfoundland on Viator

Popular Things to Do in Newfoundland

Food and Drink in Newfoundland

St. John's claims it has more pubs for its population than any city in Atlantic Canada, and many of them are found on George Street. So, what could be more natural than a pub lunch or pub dinner of fish and chips? The fish is generally cod. Don't miss the local favorite of cod cheeks or crispy cod tongues. Both are fleshy parts of the cod's head and as tender as you might imagine.

Near Attractions: Grab a bite at The Rooms Cafe. when visiting the cultural museum of the same name. The menu offers soups, salads, sandwiches and traditional fish dishes. (9 Bonaventure Avenue; open 10 a.m. to 5 p.m. Monday to Saturday and noon to 5 p.m. Sunday)

Signal Hill National Historic Site, at the mouth of St. John's Harbour, commemorates the cliff top where signal flags once alerted merchants, customs officials and harbor pilots to approaching ships, be they friend or foe. Cabot Tower, built in 1897, is perched atop the hill. The tower was used for signaling until 1960 and houses exhibits of Marconi's historic, first-ever transatlantic wireless message, received on the hill in 1901. (Open 8:30 a.m. to 9 p.m. daily, June to August; 9 a.m. to 5 p.m., mid-April to May and mid-September to January)

Cape Spear, seven miles southeast of town, is the easternmost point in North America. It's the site of Cape Spear Lighthouse, Newfoundland's oldest surviving lighthouse. Built in 1836 and actively used until 1955, it has been restored to its original appearance. Depending on the time of year, from the top of Cape Spear, you might see icebergs (they float over from Greenland), whales or seabirds. (Open 10 a.m. to 6 p.m., Wednesday to Sunday, May 22 to June 11; daily, June 12 to September 4; and Saturday to Wednesday, September 5 to October 15)

The Rooms is a cultural museum, art gallery and provincial archives rolled into one. Though the colorfully painted sides of the building are based on simple, oceanfront fishing rooms where families once processed their catch, the massive structure is strikingly modern and dominates the skyline. Displays and dioramas depict the history of Newfoundland and Labrador, starting from the glacier age. (9 Bonaventure Avenue; open 10 a.m. to 5 p.m., Monday to Saturday and noon to 5 p.m. Sunday, June to mid-October; closed Mondays, mid-October to May)

Johnson Geo Centre showcases geology of the world in general and Newfoundland and Labrador in particular. The museum is built largely underground in 550 million-year-old rocks. It also includes a fascinating Titanic exhibit that tells the complete story of the ship's sinking. (175 Signal Hill Road; open 9:30 a.m. to 5 p.m. Monday to Saturday; noon to 5:30 p.m. Sunday; closed Mondays mid-October to mid-May)

An accident of storing port wine in St. John's in the late 1600s seemed to give the wine a better flavor. Hence, the practice of leaving port to mature in Newman Wine Vaults, not to mention the ensuing ghostly tales. The brick and stone vaults that remain are among the city's oldest structures, and tours capitalize on the haunted factor to build intrigue. Sampling port helps, too. (435 Water Street; Open 1 p.m. to 5 p.m. Wednesday to Sunday, July to August)

Train buffs will be fascinated by the Railway Coastal Museum. It's located on the ground floor and passenger platform of the century-old Newfoundland Railway station. Learn about trains that once criss-crossed the island, providing links to coastal steamers. See the interiors of vintage dining cars and sleepers. (495 Water Street; open 10 a.m. to 5 p.m. daily, June to mid-October. The rest of the year, hours are 10 a.m. to 5 p.m. Tuesday to Saturday and noon to 5 p.m. Sunday)