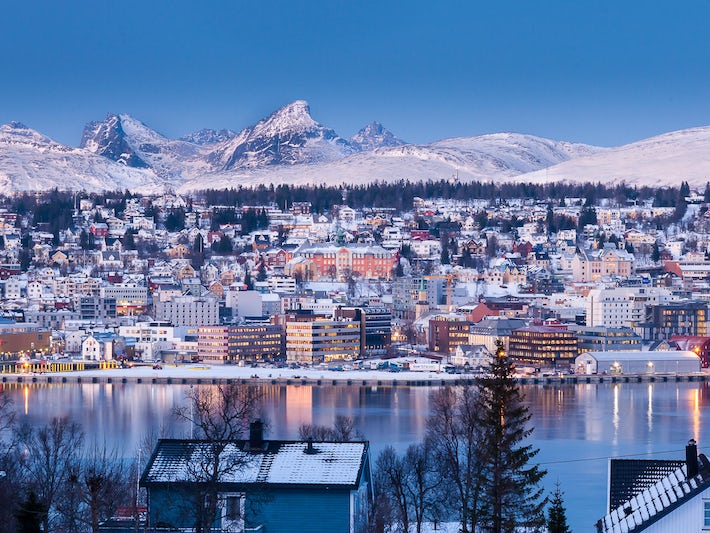 Find Things to Do in Tromso on Viator

Popular Things to Do in Tromso

Food and Drink in Tromso

Tromso, like most places in Norway, is heavy on seafood given its proximity to the sea and access to fresh fish, shrimp and even whale (worth noting that Norway is just one of three countries where whaling continues and whale meat is still served, though it's not a staple). Reindeer is ubiquitous.

Mathallen: This is one of the best restaurants in Tromso, specializing in locally sourced, seasonal ingredients, fish and meats, cooked in a traditional Norwegian way but with a modern twist. It is open for lunch and dinner, and doubles as a delicatessen during the day, with local fish and meat. You can opt for a multicourse tasting menu, with wine pairing (there is a vast range of wine) or a la carte.

There is plenty to do in Tromso, both in the city and just outside, whether that's husky sledding, skiing (downhill and cross-country), kayaking, snowshoeing or snowmobiling. The city itself has a wealth of museums, shopping and sights, all within easy walking distance.

Tromso Science Centre and Planetarium: If you only do one excursion, it should be this one. The Science Centre of Northern Norway is located on the University of Tromso campus, so is well-served by bus routes from the city center, or a short taxi ride. It's a lovely center -- especially geared up for kids -- with the highlight being the planetarium at the top. The science center has two floors of kid-focused science activities (you'll often see school groups here), a cafe and a gift shop.

The planetarium shows an extraordinary northern lights movie called "Extreme Auroras," every day at 2 p.m. in a cinema in the round. The 45-minute show is well worth the entrance fee alone, and if you don't get the chance to see "the lights" while you are in Tromso, this is a great substitute. It can't be emphasized how extraordinary this movie is in capturing the colors, the shapes, even the feelings the aurora evokes, all filmed by a local.

Husky Sledding: About a 20-minute taxi ride out of town lies the Villmarkssenter; it's one of the most popular shore excursions offered by the lines here and provided by one of the biggest adventure companies in Norway. The center houses and breeds the huskies, which you meet as part of the experience. There are also a number of traditional Sami huts, where you'll head for a drink and a bite to eat afterward.

The husky sledding takes place in the area surrounding the center. You can opt to lie down in the sled, enjoy the ride and take pictures; or you can stand at the back with the guide, learning how to be a musher. It lasts around an hour. The dogs go out in every weather, but if it's particularly bad, you do get the option to skip -- it's much more pleasant in the brilliant Arctic sunshine rather than a blizzard. Snowsuits are provided.

Afterward, you get to meet the dogs and the puppies and then enjoy a steaming hot bowl of reindeer soup.

Skiing: Tromso has a ski center, around 15 minutes out of town, called the Tromso Alpinpark, which you will need to book independently (though Hurtigruten is looking to add this to its extensive list of shore excursions). It is small, with just three slopes, one of which is for stunts. There is a shop for ski and snowboard rentals and accessories, a small cafe for snacks and small meals around a central log fire and a marquee area opposite for apres-ski.

The lower slopes are perfect for beginners, with very gentle nursery slope. The red/black slopes -- accessible by a separate drag lift -- takes around 10 minutes to get up and is reasonably challenging with a section for moguls and some off-piste. The view up here are stunning -- right across the islands, the mountain tops and the fjords.

Cable Car and Snowshoeing: Floya, one of the mountains above Tromso on the mainland, is accessible via a cable car called Fjellheisen. Take this to the top and you get breathtaking views (weather permitting) of the town and the mountains around, including Tromsdalstinden, the mountain above town.

You could simply admire the views from the viewing platform up here, or have a bite to eat in the restaurant at the top. Or, you could participate in the most popular activity during the winter months: snowshoeing. Head out from the restaurant toward the slopes where you'll find plenty of marked paths to the top. It's tiring work trudging through the snow, and it can get windy up here, so wrap up warmly. During the summer there are good hiking trails around here. Take sunscreen and plenty of water.

Arctic Cathedral: The most popular shore excursion offered by Hurtigruten in Tromso on the southbound journey is the Midnight Concert at the Arctic Cathedral. This stunning Lutheran church, built in 1965, is not actually a cathedral and is, in fact, a parish church called Tromsdalen Church, (but everyone knows it as the Arctic Cathedral).

You can't miss it -- the cathedral is directly opposite the bridge which connects the island to the mainland and dominates the skyline. Even if you don't opt for the Midnight Concert, it's worth a look inside at its stunning interior. The concert lasts about an hour and is really very beautiful, with an emphasis on traditional Norwegian folk songs.

Polaria Aquarium: Just yards from the main cruise terminal and easily walkable, the aquarium is where you can observe all kinds of fish. More of a draw, it's one of only two places in Europe where you can get up close and personal with the bearded seal. There is also a small cinema where you can catch short films on Arctic wildlife and the northern lights -- ideal for kids.

Walking Tour: If you'd rather explore this port on your own, the city -- dotted with colorful, cube-shaped buildings that resemble Lego blocks -- is easily walkable. This won't take you long, but it's a pleasant stroll, which takes in some of the main sights. The town center spreads out from a pretty main square, Stortorget, near Kirkeparken, at the center of which is the actual Tromso Cathedral, dating from 1861 and famous for being the only Norwegian cathedral made of wood. It's open to visitors.

The main road, Storgata, which is pedestrian-only for part of the way, runs across the top of the square, and you'll find most of the cafes, restaurants and smaller shops along this stretch or just off it. Most of the city center sights are here, too, including the Radstua Theater and the Cultural Center, which includes a cinema.