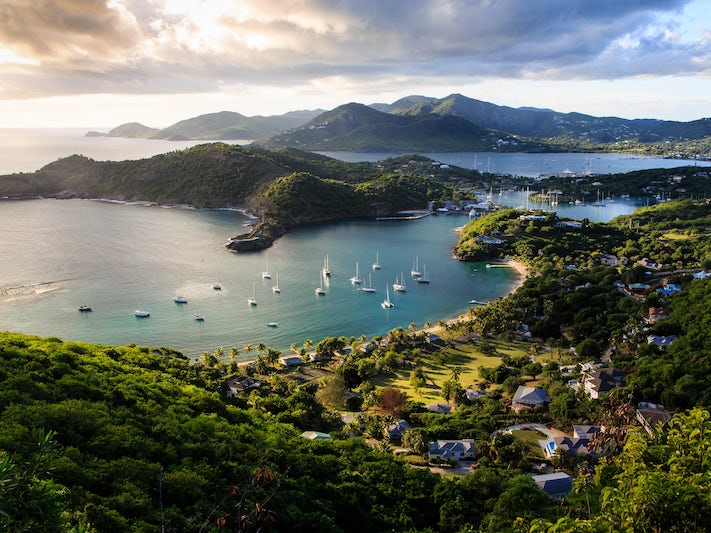 Find Things to Do in Puerto Quetzal (Antigua) on Viator

Popular Things to Do in Puerto Quetzal (Antigua)

Guatemalan cuisine is derived, in large part, from dishes the Mayans used to eat. Most feature some variation of rice, corn or beans. Soups with chicken, beef and seafood are also popular, and flavoring is often done with chilies.

Restauranta Pez Vela: The only restaurant in Puerto Quetzal, this little open-air venue, on the path just past the Wi-Fi zone and behind the marina, is a great place to stop for a cold beer and some grub. What you'll find on the menu is a mix of fresh fish, seafood, chicken and beef in the form of sandwiches, soups and more. There's also an entire page dedicated to various types of ceviche (spiced fish cooked with onions and lemon juice), and you can choose from sides like rice and beans or French fries. Prices are reasonable, and the menu is in both Spanish and English. (Km 112, Monday through Thursday, 9:30 a.m. to 10 p.m.; Friday through Sunday, 6 a.m. to 11 p.m.)

Hotel Posada de Don Rodrigo: Located along one of the main streets in Antigua (Calle del Arco, or Arch Street), the restaurant located within this picturesque hotel is a quiet place to stop for a delicious bite to eat; ask for a table overlooking the lovely courtyard. The restaurant serves a combination of international dishes along with Guatemalan specialties, including freshly baked soft tortillas. (Calle del Arco No.17, Daily 6 a.m. to 10 p.m.)

The Guatemalan beer Gallo is very popular and -- of course -- coconuts, which are cracked open so you can drink their water with a straw. Try coconut with some some rum added; it makes for some exceptional warm-weather refreshment. You'll also find Gallo in restaurants and cafes throughout Antigua, as well as Arabica coffee, considered by the locals to be the best in Central America.

Best Overall Beach: Getting to Monterrico, the nicest beach near Puerto Quetzal, will require a boat ride. However, once you've crossed the Chiquimulilla Canal to get there, it's a great place for sunbathing away from the masses.

Best Beaches for Families: Take a taxi about three miles west to Balneario Chulamar, which offers relaxing and pristine white-sand beaches with lots of space for kids to run and play.

Best Beaches for a Resort Atmosphere: Nearby Balneario Likin, also a short cab ride away, is a resort town with several beaches that are worth your time. Surfing is a popular pastime there, so it's also an ideal spot for active beachgoers.

Antigua: Named a UNESCO World Heritage Site in 1979, the small city of Antigua is the place to visit if you've never been to Guatemala before. The colonial town, which was founded in 1542 by the Spanish and measures just seven streets by nine avenues, is easily walkable (it's mostly cobblestone, so you'll need to be steady on your feet) and filled with museums, churches, art galleries and cafes. It takes about 90 minutes to get from Puerto Quetzal; you'll need to book an excursion or grab a taxi outside the port to get there. Highlights of the city include: Parque Central with its pretty fountain and Jacaranda trees, which are glorious to behold when in bloom in early winter; the Cathedral de Santiago, located on one side of Parque Central, which features the ruins of earlier incarnations of the church; La Merced Church (Church of the Virgin of the Mercy), built between 1749 and 1767; and Casa Santo Domingo, a museum/restaurant/hotel set in a former convent, which features six museums to check out including the Colonial Museum, Archaeology Museum and Museum of Pre-Columbian Art.

Coffee Plantations: Coffee is a major cash crop in Guatemala and coffee plantations are everywhere. Several coffee farms offer tours giving visitors the change to learn about coffee from its history to how it's grown, harvested and prepared. Tours can be booked via cruise ship excursions, with third party tour companies like Viator, or directly with farms like the Filadelfia Coffee Resort.
Editor's Note: CruiseCritic.com is published by The Independent Traveler, Inc., a subsidiary of TripAdvisor, Inc., which also owns Viator.

Tikal National Park: If you're in good shape and are interested in Mayan culture, this national park and UNESCO World Heritage Site -- with 1,500 archaeological sites inside it -- is a must-visit; the central part of the ancient city alone contains about 3,000 buildings. Dating back to approximately 900 BC, Tikal was one of the most important Mayan ceremonial, cultural and commercial cities; it grew to a population of some 100,000 people by around the eighth century AD. Getting there is a trek, as you'll need to pre-book a pricey excursion, take a prop plane and make your way through a tropical forest. Once there, however, you'll get to explore one of the greatest Mayan cities, only rediscovered in 1848 after hundreds of years of being hidden by the jungle.

Pacaya Volcano: Guatemala has about 33 volcanos of which 17 are active. When you arrive at Puerto Quetzal you'll see three of them pretty clearly (all of them are active), and might even greet you with a puff of smoke or a small ash eruption. You can get up close to the Pacaya Volcano on a trek from the Pacaya Tourist Centre, which is about a 1.5-hour drive from the cruise terminal. You'll need to be very fit for this hike and a local guide is required for the visit, so you'll want to book ahead. (Some operators offer mule rides for those who don't want to walk it.) Most cruise lines offer a Pacaya Volcano trek, as does Viator and several local tour companies.

Shopping: This is pretty much the only activity in Puerto Quetzal. You can find everything from the cheesy (shot glasses and T-shirts) to the authentic (handmade scarves, blankets and jewelry) at the open-air market just beyond the welcome center. Most stalls sell identical wares, and with the number of cruise ship calls dwindling slightly of late, there will be fierce competition for your business. From a consumer perspective, it's good and bad: you can pretty much name your price for any souvenir, but you'll have to prepare yourself to be bombarded by dozens of shop owners as you attempt to browse.