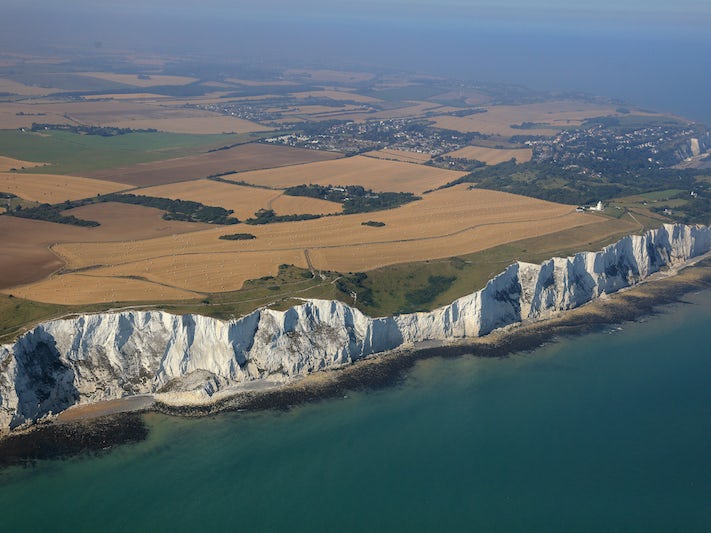 Popular Things to Do in Dover

Find Things to Do in Dover on Viator

Food and Drink in Dover

Old Lantern Inn: In an old 1636 farm house, they serve up some good vegetarian options. But we say try the Stilton and chestnut pate. Per-person cost for three courses including wine will run about $34. Noon - 2:30 p.m. daily. Martin St.

Wallett's Court: Without a doubt, the best and most impressive (and formal) eatery in the area. Try the Kentish huntsman's platter, a terrine of game partnered perfectly with apple jelly. Per-person cost for three courses including wine will run about $40. Sunday - Friday, noon - 2 p.m. West Cliff.

The Churchill Hotel: We mention this restaurant with reservations. It's the most scenic "eatery" in Dover, located on directly on the harbor, and serves up basic pub fare (there are outdoor tables as well as indoor seating). We can't, however, wholeheartedly rave about the food or service -- after an hour of waiting for a ham and cheese sandwich we finally asked for a refund and left, lunch-less. Noon - 2 p.m. daily. Dover Harbor.

One of the oldest castles (12th century) in England -- Dover Castle was built by Henry II. Check out the Pharos lighthouse that is said to have been built by the Romans during the 1st century. Inside is a military museum that includes a great exhibit of WWII spy equipment. This is where to see the Secret War Time Tunnels that were used during the excavation of Dunkirk for Operation Dynamo and the Battle of Britain during WWII. The 200-feet-below-the-ground (60 meters) tunnels were originally excavated to house cannons to be used on Napoleon if he invaded. Check out the English Channel from a hidden, cliff-top balcony just as Churchill did during the Battle of Britain. April - October: 10 a.m. - 6 p.m. daily. November - March 10 a.m. - 4 p.m. daily.

Nearby, the White Cliffs are impressive and looming. Stroll along Prince of Wales pier for an excellent view. There are 40-minute White Cliff Boat Tours that leave from the Clock Tower in the Marina. Try to thumb a free boat ride with one of the local fishermen in Deal (about 5 miles/8 kilometers from town). Even better -- drive to the White Cliffs Park, where you'll find glorious views of the English Channel (and any ship lover will find the cruise lanes, just below your perch, a fascinating spectacle as cruise ferries pull in and out on a regular basis). The park features miles of gentle hiking trails as well.

To see the sights of Dover, we suggest the 50-minute Open Top Double-Decker Bus Tours. Tickets valid for 24 hours and you can get off and on at any one of eight stops as you please. Market Square.

Walmer Castle was built by Henry VIII in 1539 as an artillery fortress to counter the threat of invasion from France and Spain. It's fun to cross over the moat to see this Tudor Castle's private royal apartments -- in particular, the yellow chintz armchair in which the Duke of Wellington died back in 1852 that is exactly as it was then. The formal gardens are impressive -- and be sure see the Queen Mother's Garden that was designed and presented to her on her 95th birthday. During WWII, both Queen Elizabeth (then Princess) and her mother made regular visits here to see Churchill. Some of the rooms they used are open to visitors. A must for afternoon tea. Through September 10 a.m. - 6 p.m. daily. October until 4 p.m.

England's largest collection of 1940 related items are on public display at the Kent Battle of Britain Museum. Check out the display of British and German 1940 flying equipment plus artifacts recovered from over 600 shot-down aircraft from both sides. Through September Tuesday - Sunday 10 a.m. - 5 p.m. Closed Monday. Aerodrome Rd, Hawking.

One of England's earliest Christian sites, Canterbury is considered its ecclesiastical capital. Once completely walled with many of its old fortifications standing today, the idyllic landscape of apple orchards, hop farms and cottage gardens is 90 minutes from London. Must-sees: The shrine of Archbishop Thomas Becket at Canterbury Cathedral that drew thousands of medieval pilgrims and inspired Chaucer's "Canterbury Tales" and the magnificent stained-glass windows; the Roman Museum's intricate mosaics and other archeological evidence of Roman settlement in England. Open bus and walking tours available. Canterbury. Starting at $9, depending on sites selected. Note: Come early or late to avoid busloads of tourists. Beyond the Cathedral, Canterbury has a plethora of sights to see; in particular, check out Higham Park Stately Home & Gardens.

Considered one of the world's loveliest castles (and we can attest to that fact -- it's fully furnished and in fact was inhabited by a family until the 1970s so it has a combination of historic appeal and a lived-in look), Leeds Castle, located in Maidstone, is like the Disneyland of Castles. There's much to do and see -- a day's worth, really; beyond the manse itself there is an aviary, maze, grotto, gorgeous gardens, a duckery, woodland walks, restaurants and shops. Open all year; 10 a.m. - 5 p.m. daily.

We spent a magical pre-cruise weekend at the aforementioned Rye. This medieval port city (which these days actually lies a few miles inland from the English channel due to shifting tides) features an incredibly atmospheric village center, museums, art galleries, boutique shopping, tearooms, pubs and restaurants. Accommodations -- all of the upscale B&B variety -- are also lovely.