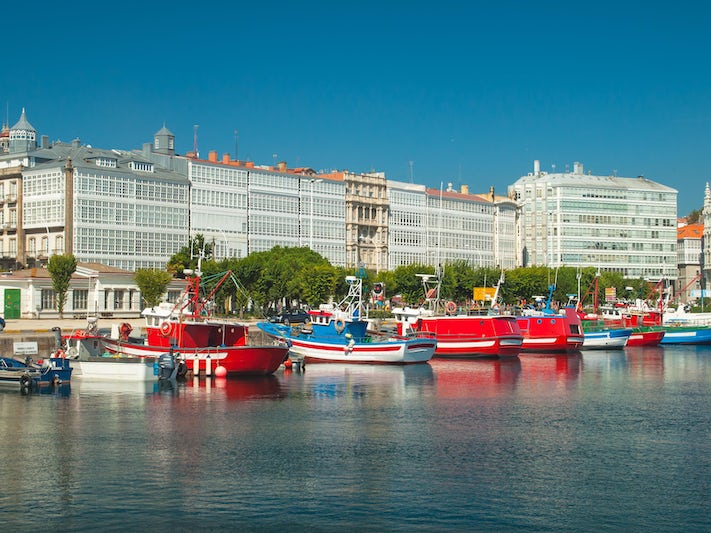 Find Things to Do in La Coruna on Viator

Popular Things to Do in La Coruna

Food and Drink in La Coruna

Seafood lovers are in their element in A Coruna. Freshly caught fish and shellfish are abundant, and prices won't mangle your wallet. You'll find everything from boiled octopus and stuffed squid to shrimps (usually fried in garlic), scallops, mussels, crayfish, eels, choquitos or chipirones (different kinds of small squid served in its own ink) and grilled sardines -- which are best enjoyed with local red wine.

Speaking of wine, local wines have no "denominations of origin" (well-known growing areas), but Galicia produces excellent white and red wines that are often drunk from white china bowls and accompanied by platters of seafood. Specialties include fish stews with baked potatoes or sausage and bacon stew with potatoes, beans, turnips and cabbage. Empanadas, patties filled with pork, eels or lampreys, make a filling snack.

If you prefer weak coffee, look for cafe Americano on menus; coffee with milk is "con leche," strong black coffee that comes in a tiny cup is "solo." If beer is more your thing, Estrella Galicia is A Coruna's signature beer.

Pablo Gallego: This is a classy, midpriced restaurant with cozy atmosphere. It serves creative Galician cuisine with a seafood emphasis. Choices range from simple anchovy dishes and monkfish medallions to grilled octopus with piperrada (stewed peppers) and tuna with sun-dried tomato pesto. (Calle Capitan Troncoso 4; 981 208 888; open 1:30 p.m. to 4 p.m. and 8 p.m. to midnight Monday to Saturday)

A Coruna has several beaches, though swimmers might find the sea a bit chilly at times.

Best Close to Town: Playa del Orzan and Playa de Riazor are the main beaches, usually both busy in fine weather, popular with surfers and with good locations right in town. (Before swimming, check whether the green flag is hoisted; waves can be severe when it's windy.) These are public beaches with lifeguards and plenty of sunbeds for hire. Being in town, there are plenty of restaurants and bars nearby.

Best for Active Pursuits: Playa San Amaro is a blue flag beach which means that it's environmentally friendly. It's good for scuba diving too. It's just over a mile out of town. This public beach is equipped with showers and wheelchair ramps and has a lifeguard service. There are restaurants within 300 meters.

Best for Relaxing: Playa Santa Cristina is a quiet public beach a mile or so outside A Coruna, ideal for relaxing or enjoying a picnic. It has little in the way of facilities but is popular with sunbathers.

Torre de Hercules: The Tower of Hercules is the world's oldest Roman lighthouse, dating to the second century. The still-working lighthouse and surrounding area have UNESCO World Heritage status. As your legs will achingly testify, the 234 steps make for a hefty climb, but the views from the top -- more than 193 feet high -- are utterly magnificent. Nearby, you'll find a sculpture park and the Millennium Obelisk, a 150-foot crystal needle that depicts important moments in A Coruna's history. (Avenida de Navarra; 981 223730; open 10 a.m. to 9 p.m. June to September and 10 a.m. to 6 p.m. October to May)

Monte de San Pedro: This hilltop park is just a couple of miles north of the city center. This is where to find the Cupula Atlantica, an observation dome, as well as a maze, a restaurant and two rather forbidding looking restored gun emplacements that once protected the entrance to the harbor. (This was a military area.) If you don't want to walk up the hill -- it is pretty steep -- hop in the Ascensor Panoramico, a glass-ball shaped elevator that slowly ascends the hillside from the Paseo Maritimo. We all know it's easier to walk down than up, and at the bottom is a bus stop where you can get a ride back to the city center. You can buy a ticket from the driver for 1.20 euros.

Promenade: Walk along here to soak up A Coruna's architecture, culture and atmosphere. At six miles, it is Europe's longest promenade and serves almost like an outdoor gym for locals who can be seen jogging, walking or cycling (there is a bike lane).

Shopping: A Coruna is where the global fashion chain Zara opened its first store in 1975. It's now a far cry from the early days when its founder, Amancio Ortega, started his business by selling aprons to housewives (Calle de Juan Florez 64-66; 10 a.m. to 9 p.m. Monday to Saturday). The main shopping area is at Cuatro Caminos (Calle Ramon y Cajal), a bustling center with around 100 shops and restaurants. The lanes off Calle San Andres, which are hemmed with cafes and tourist shops, also offer many retail options. Most shops are open 9:30 a.m. to 8 p.m. Monday to Saturday, and some close for a few hours in the afternoon. El Corte Ingles, a large city center department store, sells almost everything you might need (Calle Ramon y Cajal 57-59; 981 189400; open 10 a.m. to 10 p.m. Monday to Saturday).

Santiago de Compostella: Since the Middle Ages, the city not far from A Coruna has been one of the world's great pilgrimage destinations and the site of the shrine of Saint James the Apostle.