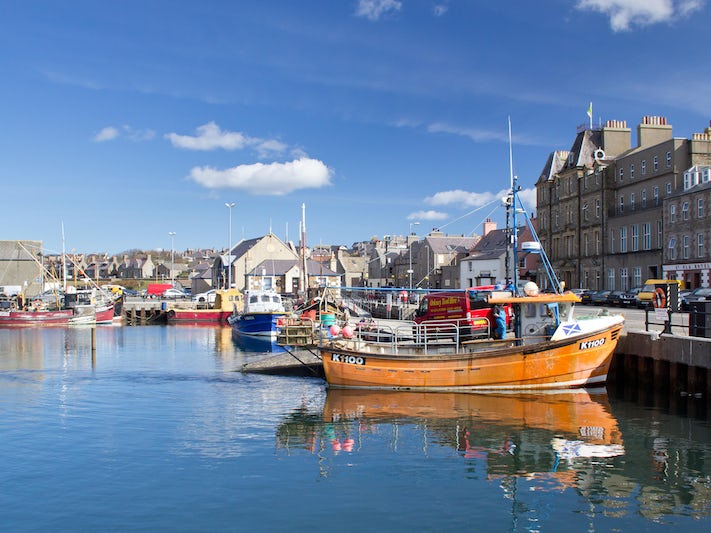 Find Things to Do in Kirkwall on Viator

Popular Things to Do in Kirkwall

Food and Drink in Kirkwall

There's a bounty of great ingredients in Orkney, including beef and sustainably fished crab, lobster, scallops and salmon. Add to it a tradition of high-quality dairy products, and you know you can dine well. Add to the mix award-winning beers, several cheese-makers, local ice cream, oatcakes (we even found a sundried-tomato version) and Orkney Fudge. The fudge comes in several flavors, including one with Highland Park whisky. You'll find it in gift shops. Be sure to duck into a bakery, too, to check out the vast array of tempting goodies. We bought wonderful shortbread at Argo's Bakery (44 Albert Street).

Traditional Scottish dishes include haggis -- sheep's heart, liver and lungs, minced with onion, oatmeal and spices, cooked in a sheep's stomach and traditionally served with a shot of whisky; tatties and neeps (mashed potatoes and turnips) and black pudding (blood sausage with oatmeal).

Judith Glue Real Food Cafe: This is a great resource for all sorts of food gifts, and it offers a cafe at the rear. You'll find lots of tasty choices using high-quality local ingredients, including salads, homemade soups, sandwiches, quiche, stuffed baked potatoes, an all-local cheese board and the "Orkney Smorgasboard," which gives you a taste of seafood, meats, cheeses, oat cakes, bere bannock (a type of local barley cake) and chutney. Don't forget to check the specials board, and if you have room, go for the Orkney fudge cheesecake. (25 Broad Street; +44 (0)1856 874225; open 9 a.m. to 7 p.m. Monday to Saturday and 10 a.m. to 6 p.m. Sunday)

Helgi's: This establishment dishes up traditional Scottish fare, as well as burgers, fish and chips, and vegetarian dishes -- all adhering as much as possible to fresh, local, organic ingredients. This pub also offers free Wi-Fi for customers. (14 Harbour Street; serving food noon to 9 p.m.; 18 and older only)

When in Scotland, go for the Scotch! Many whisky labels never make it to the United States, so sip and experiment. Scotches made on the islands tend to be more "peaty" or smoky from the peat used as fuel in the production process. You might even want to visit Highland Park, the world's most northerly whiskey distillery (see below). You'll also find a number of Orkney-produced beers and ales.

Skara Brae: Skara Brae, a 5,000-year-old Neolithic village, was uncovered just over 150 years ago when a howling storm blew away dunes that were covering it. The small homes are still partially buried, and you walk on pathways looking down into the excavations. At first, it might not look like much, but as your guide starts to explain, you'll see beds, cupboards, fire places and possible altars and fish tanks -- all made from stone, so the setting is more intact than you'd expect. A small, but excellent, visitor center has exhibits that explain what life was like in the village. And don't miss the recreated home just outside the visitor center as you head to the village site. It really puts what you'll see into context. (Sandwick, off the B9056 road; open 9:30 a.m. to 5 p.m. daily April to September and until 4:30 p.m. October to March)

Maes Howe: More than 5,000 years old, Maes Howe is the finest chambered tomb in northern Europe. It's so well preserved because it's constructed from huge sandstone slabs. The treasure inside didn't fare well, though. Vikings plundered it in the 12th century, leaving lewd graffiti on the walls. You enter through a low, 39-foot passageway, which opens up into the main chamber, with three other chambers attached. Timed tickets must be purchased in advance, and groups are limited to 25 people, which means the site isn't offered on many lines' shore excursions. Tours last 20 minutes. (West of Kirkwall at Tormiston Mill, off the A965 road; +44 (0)1856761606; reservations may be made at other Historic Scotland sites by requesting them to telephone for you)

Ring of Brodgar: The circle of standing stones known as the Ring of Brodgar is at a dramatic location, overlooking the Loch of Harray. After climbing uphill on a well-maintained pathway, you reach the huge circle, which is surrounded by a ditch (or henge), bridged in two spots by causeways. Of the original 60 stones, 27 are still standing, and you can wander the site freely.

St. Magnus Cathedral: The vast St. Magnus Cathedral, built by a Norse earl to honor his murdered uncle Magnus, was completed in 1152. It's Britain's most northerly cathedral. As you enter, check out the lovely doorways and huge hinges that were added later. Inside, square pillars next to the organ screen hold relics of St. Magnus and his nephew Earl Rognvald, who had the cathedral built. Later in the day, the sun strikes the exterior wall, illuminating the pink sandstone. (Broad Street; open 9 a.m. to 6 p.m. Monday to Saturday and 1 p.m. to 6 p.m. Sunday from April to September and 9 a.m. to 1 p.m. and 2 p.m. to 5 p.m. Monday to Saturday from October to March, may be closures for weddings)

Highland Park: About a mile south of Kirkwall, 200-year-old Highland Park is a well-regarded distillery -- one of a handful that still has a traditional malting floor. It offers five tours, from the standard one-hour visit, in which you see a film, tour the distillery and taste 12-year-old Scotch, to the two-hour Magnus Eunson tour, during which you get to sample seven Scotches under the tutelage of a senior guide. The top three tours must be booked in advance, and they include transfers to and from Kirkwall.

Italian Chapel: The remarkable Italian Chapel was built from Quonset huts, barbed wire, concrete and other odds and ends by Italian prisoners during WWII. The prisoners were brought in to build causeways connecting some of the islands in order to block German ships. Working in their free time, the prisoners painted the chapel interior to mimic brick walls, carved stone, vaulted ceilings and buttresses. They created frescos of angelic figures, stained glass windows and an altarpiece depicting the Madonna and Child. An ornate scrollwork screen and gates surrounding the sanctuary were made from scrap metal. It's a true testament to dedication and ingenuity. (On Lambholm Island, about eight miles south of Kirkwall; +44 (0)1856 872856; open 9 a.m. to 10 p.m. April to September and until 4:30 p.m. October to March)

Skaill House: Built in 1620, Skaill House is located near Skara Brae. The house was originally the country manor of a bishop, though it's been expanded through the years. There's a rather eclectic assortment of furnishings inside, but one item of note is Captain Cook's china set, which made its way there when his ship docked at Stromness after his death. You'll also see good examples of Orkney chairs. (Sandwick, off the B9056 road; open 9:30 a.m. to 5:15 p.m. daily April to September)

Earl's Palace: Discover other remnants of Kirkwall's past. Across Palace Road from the cathedral is the early 17th-century Earl's Palace. It's a ruin but interesting to explore, particularly the great hall and adjoining rooms. Across from it is the 12th-century (with a number of remodels) Bishop's Palace, also a ruin.

Orkney Museum: The free Orkney Museum, nearby on Broad Street, is housed in a 16th-century mansion. It's a wonderful treasure-trove of Orkney history, including Pictish stones, artifacts from a Viking boat burial and displays about country life.