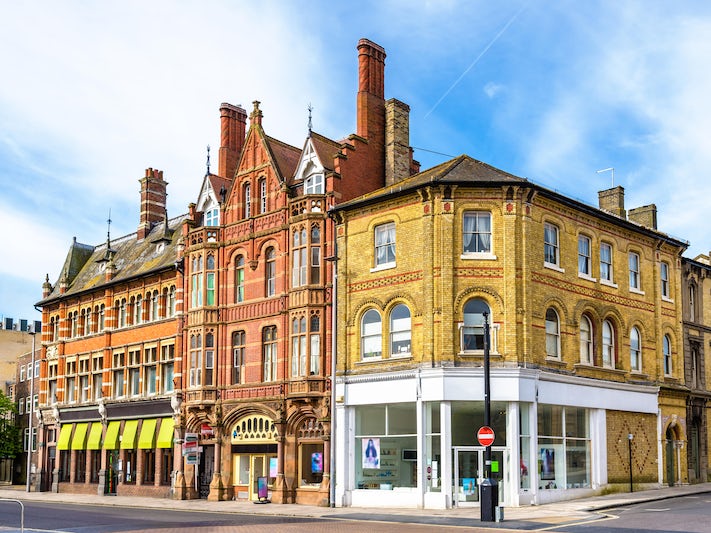 Find Things to Do in Southampton on Viator

Popular Things to Do in Southampton

Food and Drink in Southampton

Head over to Southampton's upscale district -- a few block stretch along Oxford Street -- where places like the Oxford Brasserie (33 Oxford Street, (023 8063 5043), for bistro fare. The White Star Tavern and Dining Rooms (28 Oxford Street, 02380 821 990) started life as a seafarers' hotel, and since opening early in the new millennium, it has proven itself to be a flagship establishment in Southampton. The interior pays homage to the history of the building, with chandeliers and comfy leather sofas. and cuisine is "modern British" with familiar names such as local sausages and mash, beer battered fish and chips and healthier options, such as pan fried fillet of salmon or breast of free range chicken. There are also three different canape menus. There are numerous other chain and bistro-style eateries in this stretch, including pizzeria Prezzo; Chimichangas, for Mexican food and Caf? Brazil, on adjacent Latimer Street.

On the Quayside, the Italian Ennio's (Town Quay Road, 02380 221 159) is a favourite for lunch and dinner. Cuisine is hearty, service is lovely, and the ambience is charming. Another popular choice on this stretch of road is the Spanish La Regata (Town Quay, 023 8022 3456 ) for tapas and seafood; it's open for lunch and dinner and has outside seating. Cuccini's on the Quay (023 8033 5045, open 11 a.m. until late) is another Italian option for lunch and dinner; evenings it features a jazz musician.

Newly-opened The Pig in the Wall is primarily a hotel, but is also serves hot and cold tapas-style piggy nibbles from its Deli counter at lunch and dinner.

Other recommendations in the city include Que Pasa (104-108 Above Bar Street, 023 8023 5930), a lively bar cafe right in the center of the city. The location is good if you've worn out your feet while shopping, as it is only a stone's throw from the West Quay Mall. The restaurant overlooks a small park, and it has tables outside as well. This is a casual place that starts to serve lunch at 11:30 a.m. and remains open past midnight each day. The food is nothing special -- burgers, fish 'n' chips etc. -- but at very reasonable prices.

SeaCity Museum (Havelock Road; Open 10am-5pm, Mon-Sun) moved to the Civic Center in 2012, to coincide with the centenary of the sinking of Titanic. Even if you think you've seen and read everything there is to know about the Titanic, the permanent Southampton's Titanic Story exhibition is well worth a visit. Fascinating, thought-provoking and moving, it starts with a wall of names and faded photographs of everyone onboard and invites you to follow a number of passengers and officers, drawn from across classes, through the various rooms. You learn about their loves and lives and, at the end, whether they survived. The ship left Southampton on her maiden journey, with hundreds of Southampton residents as members of the crew, so it is especially poignant to have it here. There are scale models (including of the Queen Mary) interactive exhibits (including newspapers from the time) and a wide range of artifacts such as letters, jewelry and even a pocket watch stopped at the exact time the ship went down. A particular highlight is recordings from the inquiry set up after the disaster, which are played with still images, in the former council chamber. There is a coffee shop and gift shop on the ground floor selling all sorts of Titanic-themed stuff; and adjacent is another room which houses temporary exhibits..

If you are keen to learn more about the city's Titanic connections, there is a walking tour leaving from the museum that takes in memorials to the ship's musicians and engineers, none of who survived. When you leave the museum, head for Above Bar Street to the Titanic Engineer Officers Memorial in East Park (opposite the Cenotaph). Then walk to Oxford Street next to The Grapes Pub, where four members of the ship's crew had a lucky escape - they stayed too long drinking on the day of the departure and were refused entry onboard as it was about to set sail! At the end of the street, you'll spot the impressive fa?ade of South Western House, where many families stayed the night before. Finally, walk down Canute Road to Canute Chambers, the former headquarters of the White Star Line.

Southampton City Art Gallery is located in the Civic Center and houses an eclectic collection of art from medieval to modern. The core of the collection is twentieth century and contemporary British art, with a focus on local artists, although it also has works by well-known British modern painters such as Laurence Stephen Lowry and Duncan Grant.

The Southampton Tourist Guides Association offers Heritage Walks for a small fee at 11.00 a.m. (Oct-May, Sundays only; June & July and Sept., Sun, Tue, Thurs. and Sat; and in August specialist walks every day) from the Bargate Monument in the city center, which dates back to the 12th century. The route visits the medieval town walls and vaults, St. Michael's Church (oldest section from 1070), and the site where the Mayflower and Speedwell sailed for America in 1620.

Southampton Shopping: One thing the city excels in is shopping, with three large shopping centers and numerous specialist shops in the old town. Walk along Above Bar Street towards the waterfront, and you will see the Marlands shopping center on your left at the junction of Civic Centre Road; then West Quay Mall on your right. The latter is the newer, bigger, high-end mall housing large stores, such as John Lewis, Waitrose and Marks & Spencer, plus a number of specialty shops and boutiques. The Marlands was the original mall, which despite having a significant refurbishment, is still the poorer cousin. Bargate Shopping Centre is further down the street, at the start of the Old Town. Above Bar and its continuation, High Street, have a number of pubs, cafes and restaurants to rest your feet and have a meal or drink ... or both. The 15th century Red Lion pub is one.

There are a number of harbor and ferry trips worth considering which leave from landings at the Town Quay, which is directly opposite the end of the High Street, or Ocean Village, a few minutes walk to the east. A free shuttle bus runs from Southampton Central train station.

The shortest trips are run by Blue Funnel Cruises which offers a docks' tour best enjoyed when one or more cruise ships are in, various river cruises and a day trip to Portsmouth. The boats leave from Ocean Village. The ferry to Hythe, a small town on the far side of the harbor, is another chance to get up close and personal with the big ships as it sails right past them on a 15-minute trip which connects at Hythe Pier and an ancient miniature train that rattles along the length of the pier to the town. A pub with outdoor seating affords a good view of the ships sliding by. Departures are every half-hour.

For a half-day or all-day trip, ride the Red Funnel Line ferries to East Cowes, Isle of Wight. Take one of the roomy passenger and vehicle ferries (not the hydrofoil) for the leisurely 55-minute trip past the southernmost berths then down Southampton Water and the Solent, or the high-speed ferry in less than half that time.

At East Cowes, a Southern Vectis #4 or #5 bus will take you the two miles to Osborne House, a large Italianate-style villa and Queen Victoria's favorite residence. If you want to visit the house and gardens, ask for a combined ticket for the ferry and the house. It was here that Victoria passed many a blissful summer with her husband Prince Albert and nine children, and where she died on January 22, 1901, at 6:30 p.m. at the age of 81. For further details, check the English Heritage Web site or call 01983 200022. The house is open daily from 9.00 a.m. to 5 p.m. from Feb-Nov; weekends during winter.

A second I.O.W. destination is the town of West Cowes, reached from East Cowes by using what is called the floating bridge (free) that crosses the narrow river dividing the two. The attractive main street is lined with antique stores, pubs and restaurants, and there you'll find Beken of Cowes, a famous photography store that chronicled the comings and goings of the great ocean liners and sailing yachts.

Hampshire Country Houses and Palaces: The home of the late Earl Mountbatten, Broadlands was the site of two royal honeymoons, those of Queen Elizabeth II (then Princess Elizabeth) and Prince Charles. The New Forest showcases old shipyards and a museum; the New Forest was created by William the Conqueror as a royal hunting ground. Broadlands is roughly 12 miles from Southampton, a 20-minute drive.

While in the New Forest, check out the Beaulieu Abbey-Palace House -- dating back to 1204 -- and the surrounding gardens. Also worth seeing is the National Motor Museum -- one of the biggest automobile museums in the world -- with some 250 vehicles, from antique to electric. These sites are 12 miles from Southampton; driving time is 30 minutes.

You can also jump on a train in Southampton for a half-hour ride to the market town on Salisbury. The early gothic cathedral, built from 1220 to 1258, houses the oldest working clock in Europe (it dates back to 1386) and features the tallest spire in Britain. The town also has a number of museums, and nearby you will find a number of other attractions, including Wilton House, a former convent and the seat of Earls of Pembroke since the 16th century. The Double Cube Room features a magnificent painted ceiling and splendid works of art by Sir Anthony van Dyck, furniture by William Kent and Thomas Chippendale, and an Axminster carpet.

A bit further afield, Longleat House near Warminster, is widely regarded as one of the best examples of high Elizabethan architecture in Britain and one of the most beautiful stately homes open to the public. It is currently home to the 7th Marquess of Bath. The grounds also house one of the country's top safari parks. It is about an hour and 20 minutes drive from Southampton.

Southampton is less than an hour from one of Britain's most famous natural attractions: the huge prehistoric stone circle of Stonehenge, which is located near Amesbury. The site has been undergoing an ambitious revamp, with in an attempt to return the stones to their natural environment by diverting roads nearby. The first phase -- the new Visitor Centre -- opens in December 2013.

History Afloat: Heading east on a 45-minute train journey to Portsmouth Harbour train station you can visit the Royal Naval Museum (023 9272 7562). The entrance to the museum area will be opposite a small square about five minutes walk from the station. The museum itself tells the story of the Royal Navy from early days to the present, and you can also visit HMS Victory, a three-deck ship built in 1766 and the flagship on which Admiral Nelson died at the Battle of Trafalgar on October 21, 1805. The ship remains commissioned in the Royal Navy, and it is the flagship of the Second Sea Lord (in plain English, the personnel director of the Navy). Nearby is HMS Warrior, a much larger steam frigate built in 1860, which is also open to the public.

A well as some wonderful naval heritage, Portsmouth is also the birthplace of Charles Dickens. The house where he was born in 1809 is a few minutes' walk from the dock and has been turned into a small but fascinating museum (393 Old Commercial Road; opening hours Tuesday-Sunday (closed Mondays) from 10 a.m.-5.30 p.m.).

Portsmouth has a tiny but well-preserved old town, which includes the original city walls and a number of houses as well as a pub, the Spice Island, which sits literally at the Port's mouth and makes a perfect spot to watch ships come in and out.