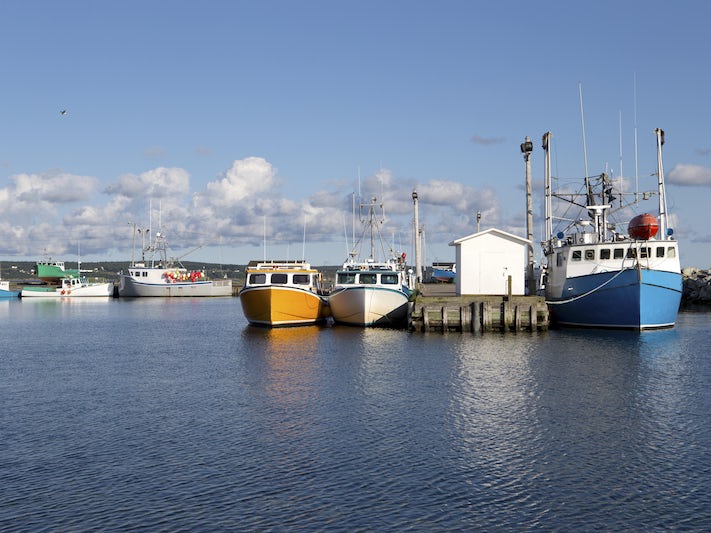 Popular Things to Do in Sydney (Nova Scotia)

Find Things to Do in Sydney (Nova Scotia) on Viator

Locally caught seafood is the first choice in Sydney, so look for lobster rolls, chowder and fish dishes on many menus. But creative chefs also have brought an international flavor, and Thai and middle-eastern dishes are well worth sampling.

Flavor Downtown: This downtown outpost of a local caterer has an intriguing fusion menu with local chowders and standards sharing space with unusual choices like its signature chicken, apricot and almond wrap, a crusted haddock wrap with mango salsa and truffle aioli, and the award-winning Poppin' Patty, filled with grilled chicken, Thai coconut chili mayo, bacon, tomato, spinach and mozzarella. You can build your own Thai coconut curry with a choice of noodles and rice, meats and seafood and different curries. (16 Pitt Street; 902-562-6611; open 9:30 a.m. to 8:30 p.m. Monday to Saturday, closed Sunday)

Try a mug of Sydney's favorite beer from Big Spruce Brewing, made locally in nearby Baddeck.

Jost House: One of the oldest wooden buildings in town, this interesting home shows how life changed over two centuries. Guests are received in the restored 18th century cellar kitchen, where guides make history come to life, telling stories about life in the old days and pointing out the cooking fireplace, separate beehive bake-oven and beamed ceiling. Thomas Jost, a Halifax merchant bought the home in 1836, and it remained in the family until 1971. The ground floor reflects their lives into the Victorian era in the parlor, dining room, bedroom and a one-time store. Upstairs bedrooms serve as a mini-museum with a well-stocked early 20th century apothecary and a marine room with model ships. (54 Charlotte Street; 902-539-0366; open 10 a.m. to 4 p.m. Monday to Saturday, June 1 to October 31; closed Sunday)

Cossit House Museum: The oldest home in Sydney still looks a lot like it did in 1785, when it was built by the Rev. Ranna Cossit, a British loyalist, who was given land by the Crown as inducement to move to the growing British colony. His wife, Thankful, might not have matched her name -- she died at age 47 during the birth of their 13th child. Members of the family lived in the house until 1975. Now restored with authentic period furnishings, the house's costumed guides tell what family life was like for the Cossits. Guides may invite visitors to partake in daily activities of the 1700s, like stitching a sampler or churning butter. Some of the upstairs bedrooms display early uniforms and clothing. (75 Charlotte Street; 902-539-7973; open 9 a.m. to 5 p.m. Monday to Saturday, 1 p.m. to 5 p.m. Sunday, June 1 to October 15)

St. Patrick's Church Museum: Originally built as a Roman Catholic church in 1828, the building has a handsome hand-carved wooden ceiling resembling the hull of a boat, reflecting the town's maritime life. Some of the hand-hewn stones from the destroyed Fortress of Louisbourg were used in the 3-foot-thick walls. In addition to local worshippers, the church had congregants from many nearby towns who came to Sydney by boat each Sunday. Eventually, the membership outgrew the space and a new church, Sacred Heart, was built on George Street in 1874. The Old Sydney Society was formed in 1966 to restore the church, and it serves now as a museum with artifacts of the early years, including the old church bell that visitors are invited to toll. (87 Esplanade; 902-562-8237; open 9 a.m. to 5 p.m. Tuesday to Saturday, June 15 to August 24, 9 a.m. to 3 p.m. on days when ships are in port, August 25 to October 30)

The Cape Breton Centre for Heritage and Science: Located in the Lyceum, a 1904 building, next door to Sacred Heart Church, this museum has changing exhibits focusing on the town's colorful history. Most town walking tours end there with refreshments that include oat cakes, a town specialty that can also be found in local bakeries. (225 George Street; 902-539-1572; open 9 a.m. to 5 p.m. Monday to Saturday, June 1 to August 24; rest of year, 1 p.m. to 4 p.m. Monday, 10 a.m. to 4 p.m. Friday)

Membertou Heritage Park: For those interested in Native American history and culture, this is an interesting stop worth the cab ride. The Mi'kmaq tribes of Canada were removed from their land and relocated to reservations like Membertou. Interactive exhibits tell the story of Membertou then and now, and there are often demonstrations of dancing and drumming. The Petroglyphs Gift Shop features aborigine crafts, including baskets, sculptures, books, music, clothing, jewelry, potter, paintings, drums, and dream catchers. (35 Su'n Awti, Membertou; 902-567-5333; open 9 a.m. to 6 p.m. daily, June 1 to October 31; rest of year, 9 a.m. to 5 p.m. Monday to Friday)

Cape Breton Miners' Museum: The best thing at this museum devoted to the island's coal mining past is the rare chance to go underground and tour an actual mine, the Ocean Deeps Colliery, led by a retired miner. There's also a recreated miners' village. (42 Birkley Street, Glace Bay, about 30 minutes from Sydney; 902-849-4522; open 10 a.m. to 6 p.m. daily, June 1 to August 31 and September 2 to October 31, rest of year, 9 a.m. to 4 p.m. Monday to Friday)