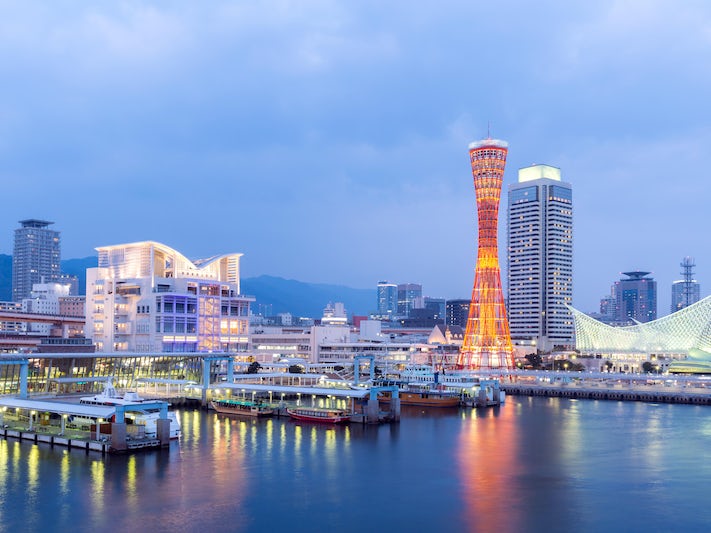 Find Things to Do in Kobe on Viator

Popular Things to Do in Kobe

Food and Drink in Kobe

There's nowhere better than Kobe to eat Kobe beef, which is tender and distinctively marbled with white fat. This beef, from pedigree Tajima herds, is usually served as single steaks, as shabu-shabu (thin slices of meat boiled in a broth) or sukiyaki (slices simmered in a hot pot). At a teppanyaki restaurant, the chef will flamboyantly grill the meat on an iron griddle in front of you.

You may also want to try bokkake, Japanese stew with beef and strips of salty konjac. It is usually served with noodles or rice. Sobameshi is fried rice mixed with chopped yakisoba (pan-fried soba) flavoured with yakisoba sauce.

Misono, within walking distance of the Port Terminal, was the birthplace of teppanyaki in 1945. Okagawa in the Shochiku Building specializes in shabu-shabu and sukiyaki. If you miss European cooking, try the filet mignon at the predominantly French-themed Kitano Club.

Daiei is a good place to get Kobe beef. (7-1-6 Shinohara Minami Machi)

Okan, near the Sannomiya Station is an izakaya, or casual Japanese drinking establishment, which also serves food to accompany the after-work drinking. (1-7-5 Kitanagasa dori)

Momotarou nearby is famed for it its yakitori (grilled skewered chicken). (7 Jalman Building 1F, 2-10-11 Kitanagasadori)

Try a rainbow cocktail at Ko's, a sky lounge bar on the 14th floor of the Meriken Park Oriental Hotel, which has 270-degree views of the Seto Inland Sea. The view alone is worth the expensive cover charge and drink prices. For something cheaper, try a mineral water in one of the plastic Kobe Port Tower bottles. Taira no Kiyomori is a cocktail named after a 12th-century warlord from Kobe city and is the speciality of the ANA Crowne Plaza hotel's Level 36 bar.

There are a few beaches near Kobe city, and swimming is possible from July to September. Suma Beach is 30 minutes west by train. Okura Kaigan Beach is in Akashi, 50 minutes west of Kobe by train.

Meriken Park contains the Port Tower with a fifth-floor view well worth its admission charge. The waterfront park also contains a much-visited Maritime Museum (2-2 Hatobacho) and a memorial to the victims of the 1995 Great Hanshin Earthquake. This is a small section of the old waterfront preserved in its concertina-ed state, with its lampposts still leaning at crazy angles.

Farther into the center of the city, don't miss Sorakuen (2-8-16 Motomachidori), a serenely traditional Japanese landscape garden that used to belong to the city's mayor.

On the slopes at the northern edge of the city, Kitano-cho is a much-visited neighborhood for its Ijinkan, Gothic Victorian stone houses built above the old city for foreign traders and diplomats. The period interiors of these buildings -- Dutch, Chinese, English and Italian -- are beautifully preserved. South of Kitano-cho, very close to Sannomiya Station, stands the Ikuta Shrine for which this stretch of coastline used to be famous. It is pleasant but much copied and seems unremarkable today.

More impressive is a visit to the Arima Onsen on Mount Rokko. This hot spring was made popular by the Emperor Jomei (593 to 641 A.D.) who was said to have bathed there for 86 days. It takes an hour by public transport from Kenchomae Station to Arima Onsen or 40 minutes by taxi from Kobe Tower.

A truly impressive day trip would also include the ancient volcano Mount Rokko, which is an hour by taxi from Kobe Tower and allows you to take in Arima Onsen on the way back.

Kobe's Nada district is Japan's top sake (rice wine) producing region, a result of high-quality rice, excellent water and favorable weather conditions. Nada stretches for approximately three kilometers to the west of the port. The various breweries offer exhibitions and tastings, and some operate museums, too. The Hakutsuru Sake Brewery Museum (6-1-1, Sumiyoshiyama-minami-machi) is probably the best for visitors in a hurry because of its comprehensive use of English language.

Himeji is a pretty city to the west of Kobe that's just 40 minutes by train. It contains Japan's oldest surviving feudal castle, which was one of the first UNESCO World Heritage Sites in the country. Next door, the idyllic Koko-en Garden, built in 1992, also is much visited.

Awajishima is an island in the Seto Inland Sea, separated from the mainland by the Akashi Strait and connected to Kobe by the Akashi-Kaikyo Bridge. This is the longest suspension bridge in the world, and at night, it is illuminated in seven alternating colors. Awaji Ningyo-Joruri, a form of puppet theater more than 500 years old performed in Minamiawaji, in the southern part of the island, has been designated part of the Intangible Cultural Heritage of Japan. The Hompuku-ji WaterTemple and Awaji Yumebutai in Awaji were both designed by Tadao Ando, one of Japan's most interesting modern architects.

Kyoto needs no introduction. The loveliest historic city in Japan is six hours inland by train from Kobe.