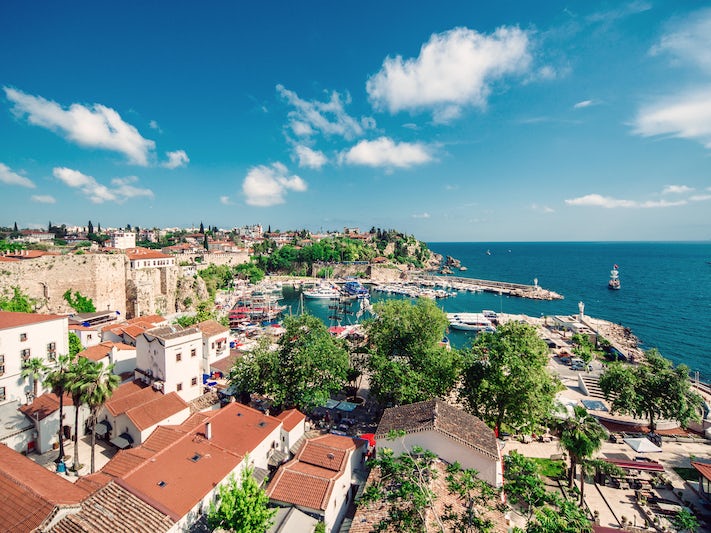 Find Things to Do in Antalya on Viator

Popular Things to Do in Antalya

Food and Drink in Antalya

Antalya is known in Turkish as The Paradise of the Vegetables. Oranges used to be harvested from trees that grew in the city streets. Olive oil is produced locally and used extensively in cooking. You'll find plenty of fresh seafood on the menu: sea bass, perch, calamari -- all caught that morning. There are also plenty of stalls selling kebabs. The doners are spicy, while urfas are gentler.

There are no set mealtimes. Once a restaurant opens in Turkey, you can order breakfast, lunch and dinner any time of day. Piyaz is a local appetizer containing beans, onion and eggs. Pide is an oval Turkish pizza.

Best for Views: Club Arma is a glamorous bar restaurant overlooking the old port. In Ottoman times it was a flour store built by Italian merchants. Attractively converted to resemble a yacht club, Arma is now a great place to watch the ships come and go below, while dining on fresh seafood. There are also great views of the old city and Bey Daglari mountain range. (Iskele Caddesi 75)

Best for Buzz: Leman Kultur is an extremely Turkish popular cafe chain based on the satirical magazine Leman. Expect to be surrounded by young people and some scurrilous cartoons, in a location not far from Hadrian's Gate. Menus in English offer burgers, salads and fajitas. (Ataturk Caddesi 44)

Best Beach Dining: Salvador Dali Restaurant & Bar in the Antalya Beach Park is one of a number of great spots for light bites -- pasta, salads and grills at reasonable prices.

Best for Lunch on the Run: Isiklar Caddesi is a very good place for kebab stalls, which you'll find under large metal awnings next to Umbrella Street (which is decorated with scores of colorful umbrellas).

The drink of choice in Antalya is Turkish coffee (Turk kahvesi), which comes in small cups and has a distinctive spicy quality. It's best taken with a little sugar. When you order, make sure you specify this because sugar is added in during the brewing, not after. Be careful as you finish it too. At the very bottom of the cup there are some pretty potent dregs that you don't want to hoover up. There are plenty of picturesque cafes to check out around the old port, but one of the most interesting contemporary cafes is Leman Kultur on Isiklar Caddesi.

Best Overall: Running from Akdeniz Port all the way to the old port is a long stretch of beach facing south across the Turkish Mediterranean known as Konyaalti. There are cafes at intervals, groups of umbrellas and sun loungers -- and occasional showers closer to the road. You'll also find water sports activities along this stretch, such as banana boats, parasailing, windsurfing and water skiing. The beach also contains Antalya Beach Park, a complex with AquaLand, DolphinLand, restaurants and clubs.

Best for Families: Lara Beach on the eastern side of the city is very similar to Konyaalti but quieter, with pebbly sand and clear water. Sun lounger prices vary during the day depending on how busy the beach is. The Turks tend to go to the beach in the morning and late afternoon, so it's quieter in the heat of the day.

Experience the Anatalya Museum -- one of Turkey's most important archaeological museums -- which contains more than 12,000 objects dug up from around the area. One gallery contains statues and frescoes of Greek gods, another is devoted to the Roman emperors Trajan, Hadrian and Septimius Severus. There are also artifacts from ancient civilizations like the empires of Lycia and Pamphylia that once ruled this land. Make time to visit the excellent museum shop, too, to pick up superior souvenirs.

Better known as Old Antalya, Kaleici is a protected historic zone with buildings that date to the 13th century. Enjoy wandering the narrow lanes that rise up between the ancient port and the city walls. It's a great place to shop for souvenirs or find a cafe quietly tucked away within the warren.

Antalya erected the triumphal Hadrian's Gate with its three double arches for the visit of the Roman emperor in 130 A.D. One of its towers is Roman, but the other was rebuilt by a conquering Seljuk sultan, Alaaddin Keykubat I, in the 13th century. It's also a good vantage point to view what remains of the city walls.

Inside Kaleici, you'll find a 13th-century mosque with a grooved minaret known as Yivli Minare. Built by the Seljuk Turks who conquered Antalya in 1207, it's a much simpler structure than the later Ottoman mosques for which Turkey is famous. After removing your shoes, note the ancient underfloor heating system that is visible below glass panels in the floor.

It's difficult to underestimate the importance of Mustafa Kemal, known as Ataturk to the Turkish nation. It is similar to the relationship of Winston Churchill to the British, but Churchill never had to reconstruct his country after a bitter defeat. The Ataturk House Museum, a replica of the villa where the country's first president stayed during his several visits to the coast, is one of many museums dedicated to his memory throughout Turkey.

You can take a taxi to Karpus Kaldran on the east side of the city where the River Duden drops 40 kilometers off a rocky cliff directly into the Mediterranean Sea, creating the spectacular Lower Duden Falls. Or you can take one of the pleasure boats from the old port to see the Antalya City and watch the Duden enter the Mediterranean Sea from below -- often through a rainbow.

Opened in 2012, the Antalya Aquarium is one of the biggest in Europe with the world's longest underwater tunnel -- 131 meters of fish swimming above you and at your side. It also contains Snow World, the largest indoor snow venue with real snow that is manufactured overnight.