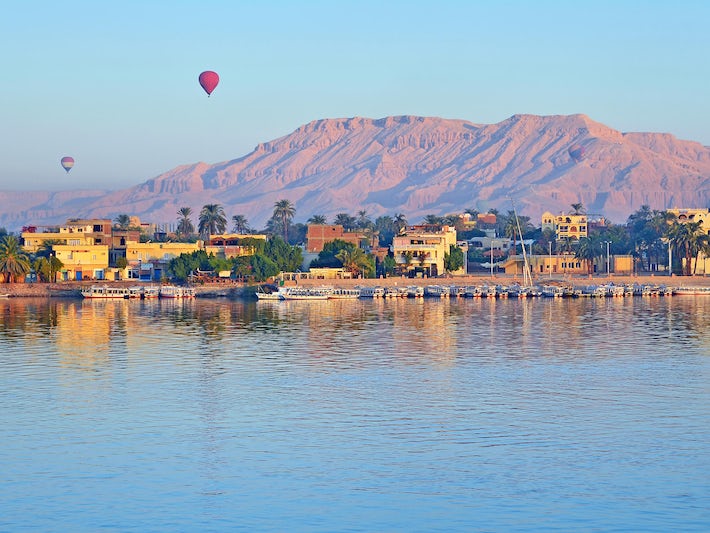 Find Things to Do in Luxor on Viator

Popular Things to Do in Luxor

Food and Drink in Luxor

An Egyptian meal often begins with pita bread and a selection of delicious appetizers, such as baba ganoush or taboule. Main courses might include meat or poultry and be accompanied by yogurt or gibna bayda, a creamy feta-like cheese. As with any popular tourist area in Egypt, it's never hard to find Western food in Luxor. Alcohol is generally not consumed by Egyptians, but imported wine and beer can be found in most hotels and some restaurants. Locally produced alcohol is less expensive, but some varieties, especially the wine, can be an acquired taste.

Hotel Dining: Many of the hotels have fantastic restaurants. The Sheraton has four to choose from, including La Mamma, which offers pizza and has a beautiful outdoor setting. The Old Winter Palace also offers two well-regarded restaurants.

Local Fare: Sofra is an atmospheric restaurant in Luxor's old town, featuring some of the best food in Egypt. Sit out on the roof terrace for great views, and order a meze feast. No alcohol is served. (90 Mohamed Farid Street)

On a Budget: The Lantern Restaurant is British-owned and offers tasty and reliable English and Egyptian food.

Valley of the Kings: This World Heritage site contains at least 65 tombs, decorated with hieroglyphics and elaborately painted walls and ceilings. The tombs no longer contain the gold treasures that made their discovery so eventful in archaeological history, but the necropolis is still a sacred place well worth a visit. A ticket buys you admission to three tombs (not all are open), plus there's an extra charge to view the grave of Tutankhamun (the famed King Tut) and King Ramses VI. Choose the latter; while the boy king has greater name recognition, most of the artifacts are stored at the Egyptian Museum in Cairo. The tomb of Ramses VI, on the other hand, holds a stunning depiction of the Egyptian Book of Day and Book of Night on its ceiling. Other tombs to try include those of Ramses I for the vivid colors, Ramses III for its long corridor of hieroglyphics and stars on the ceiling, and Ramses IX because of the cool snake hieroglyphics. (Sadly, you can't capture what you see; photos are forbidden.) There's little shade outside the tombs, so dress appropriately for the heat, and bring plenty of water.

Karnak Temple: Located outside Luxor, Karnak Temple is the largest place of worship in the world. It took 1,300 years to build this 42-acre temple, and you can see the one-upmanship among a succession of pharaohs as you wander through it. The bigger and more elaborate the temple, the more religious and thus more popular the king. The farther you step into a temple, the further back you travel in time. Look out for the statue of one of sun god Ra's incarnations -- a scarab beetle -- which symbolizes eternal life. Supposedly, if you walk around this bug three times, you're granted health, wealth and many children.

Luxor Temple: Conveniently located on the Nile's East Bank, Luxor Temple is best known for its avenue of Sphinxes that line the road to Karnak, which makes for great photo ops. Above the upper part of the temple is a sacred mosque, built before the sand was swept away. On the outer walls, you can faintly make out a painting of the last supper, in among the hieroglyphics, from a time when Christians were banned by the Romans from building churches. It's easy to spot Min, the god of fertility; he stands proudly displaying his, ahem, equipment. Interestingly, the carving is darkened in a certain area, where women hoping to become pregnant have eagerly stroked it.

Hatshepsut Temple: Egypt's ruling class experienced more than its share of power plays. One of the more famous coups came from Queen Hatshepsut, who took on the pharaoh duties after her husband Thutmose II passed away and had herself depicted in traditional male garb in temples and public places. Her temple near the Valley of the Kings is considered the most classical of the ancient civilization, with elegant pillars akin to those you'd see in Greece.

Felucca Ride: The old-fashioned, single-sail boats that ply the Nile make a lovely outing, particularly around sunset. Many river cruise operators include a felucca ride as one of their excursions, but if yours doesn't, you can book a trip on your own at the cornice. Expect to encounter a wall of touts and a lot of haggling; before you board, make sure you know the exact price (per person or per group) in the correct currency and how long you will actually be on the water.

Colossi of Memnon: These monster stone statues, rising about 60 feet high, once marked the entrance of the temple of Amenhotep III and date back to 1350 BC. While the temple itself has been destroyed, the sheer size and weight of the statues harken back to a time when the complex, near the Valley of Kings, was the largest and most opulent in the region. At one time, the statues were believed to "sing," although no reliable documentation exists in modern history.

Balloon Ride: Some river cruises offer early morning balloon rides, where you can check out the temples and desert vistas from a birds-eye view. If you decide to do this independently, be extremely careful of your provider: in February 2013, a hot air balloon crashed, and 19 of 21 passengers died. Although flights were temporarily banned, they resumed in April 2013.

Temple of Dendera: Located several hours from Luxor, the 2,200-year-old Temple of Dendera is all about Hathor, the cow goddess of motherhood. Apparently, if someone says you have cow's eyes it's a compliment, and despite her bovine features, Hathor is regarded as very beautiful. Admire the faded scenes colored using ochre, lapis and egg white, the most vivid of which pictures Nut, the goddess of water, swallowing the sun. Time has ravaged the temple, and you can see where embittered Christians later destroyed the statues and defaced the walls.