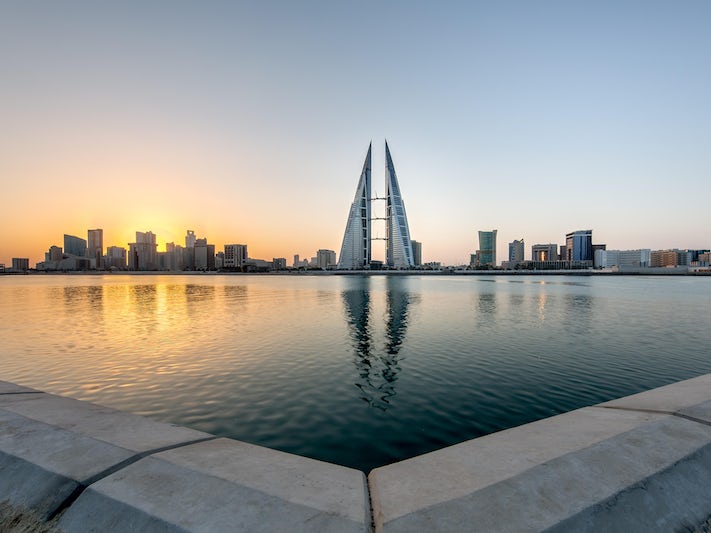 Find Things to Do in Bahrain on Viator

Popular Things to Do in Bahrain

Food and Drink in Bahrain

Similar to other Gulf countries, Bahrain's restaurant and social scenes are often centered on the country's luxury hotels, which don't have the same alcohol restrictions as other venues. (Three star hotels, however, were prohibited from serving alcohol in 2014.)

The Adilya District, near the post office and souk, is your best bet to find restaurants and cafes. This area isn't far from where the cruise ship shuttle bus drops you off.

Cafe Lilou: This French charmer has Parisian brasserie-style decor and a menu of pastries, salads and sandwiches. The comfy couches and terrace are a good place to retreat from the heat. (Saturday to Thursday, 8 a.m. to 11 p.m.)

Gulf Hotel: This five-star hotel reigns as one of Manama's best, rivaled only by the new Four Seasons Bahrain Bay. The building has nine restaurants with varying cuisines (Iranian, Thai, Chinese, Japanese, Italian, Mexican, Indian and "Western") and four cafes/lounges, as well as two bars.

Qal'at al-Bahrain: Also known as Bahrain Fort, this structure outside Manama has provided the most clues to the ancient Dilmun civilization, which dates back to 2300 BC. Archaeological excavations are ongoing outside the fort itself, which most recently was reinforced by the Portuguese, who ruled the region in the 1500s. It was singled out as Bahrain's first UNESCO World Heritage Site in 2005 as an example of 4,500 years of unbroken human habitation. There's a small museum with a few artifacts and a cafe near the site. (Daily 8 a.m. to 6 p.m.)

Bahrain National Museum: If you're curious to learn more about Dilmun civilization, which was mentioned in ancient texts such as "The Epic of Gilgamesh," spend an hour or two in this well-done museum. With exhibits in English, the museum also has a nice explanation on Bahrain's pearl-diving industry, which flourished until the Japanese created cultured pearls in the 1920s. (Al Fatih Hwy Manama; 973-1729-8718; Daily 8 a.m. to 8 p.m.)

Al-Fateh Grand Mosque: One of the largest mosques in the world, Al-Fateh can house up to 7,000 worshippers at one time. Tours are available outside of prayer times for visitors in appropriate dress; women will be loaned abayas to wear. (AlJuffair, Manama; Saturday to Thursday, 9 a.m. to 4 p.m.)

Shopping: Shopping is a major pastime for Bahrainis, expats and visitors from other Arab countries. (Malls have an unusually large number of movie theaters because films are banned in neighboring Saudi Arabia.) The king has even set aside one mall for local handicrafts, the Al Jasra Handicrafts Centre. (Jasra Village, Manama; Sunday to Thursday, 7 a.m. to 2 p.m., Saturday 9 a.m. to 4 p.m.) The Manama souk is also a good place to look for spices and other Arabic souvenirs.

Bahrain International Circuit: Bahrain's Crown Prince, Sheikh Salman bin Hamad Al Khalifa, is a fan of Formula 1 racing, and so the racetrack, which is home to the Bahrain Grand Prix, opened in 2004. Today the track hosts a number of world-class races; part of the venue is also used as a 4 x 4 adventure driving course that's a popular excursion. Note: The track is about 40 minutes outside Manama and an hour from the cruise port. Tours of the circuit are at 10 a.m. and 2 p.m., Sunday, Tuesday and Thursday. Adventure tour start times vary, depending on which one you want to do.

World Trade Centre: The countries of the Arabian Gulf are full of skyscrapers that push the boundary of modern architecture. Bahrain's World Trade Centre has two towers shaped like sails, connected with wind turbines that provide power to the building. The complex houses the Sheridan Hotel and MODA Mall, Bahrain's top venue for designer stores.

Bait Al Quran: This mosque is also an Islamic study center with a museum containing rare and artistic versions of the Koran. Many are intricately decorated on parchments that came from Mecca and Medina in Saudi Arabia. It's a quiet stop for a culture lover. (Building No.17, Road No.1901, Diplomatic Area, Manama; Saturday to Wednesday, 9 a.m. to noon and 4 p.m. to 6 p.m., Thursday 9 a.m. to noon.)